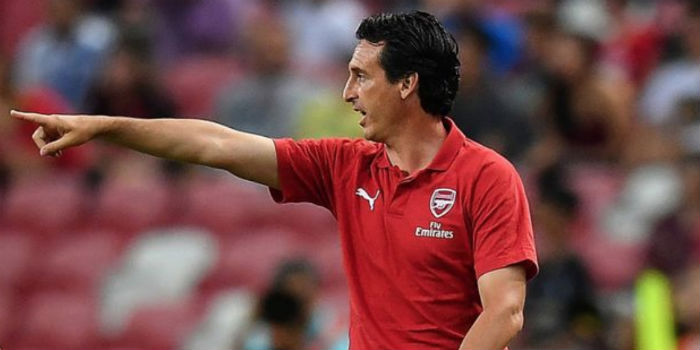 Aaron Ramsey and Ivan Gazidis. Until there is clarity on their respective futures, it looks like Unai Emery is going to spend a lot of time taking and answering questions about the both of them.

As has been well documented, Ramsey’s contract situation remains unresolved, he’s a free agent next summer and is yet to agree on an extension, and CEO Gazidis, despite a wishy-washy statement from the board, is still being heavily linked with a move to AC Milan.

Facing the press after the Gunners 3-1 penalty shootout defeat to Atletico Madrid in Singapore, our new head coach did his best to temper suggestions his camp is being unsettled by either issue and even sounded an optimistic note about the Welshman.

“Football changes every day,” said Emery. “It’s not easy, but it does change. I was thinking about the match today, then preparation for the match Saturday. I think Aaron is an important player for us.

And on Gazidis he added: “For me, every day we are having meetings together and speaking about the Arsenal project.

“We always speak about how we can improve, how we can work together to give the club all the quality we can. When I arrived here, the first meeting was with Ivan.

“For me, he’s a very good person, a very good professional and he has a lot of experience in the football world. I don’t know what he’s going to do because I only speak with him about the Arsenal project.”

One suspects that Emery, who last year had to deal with the Neymar-led media circus at Paris Saint Germain, isn’t going to get sucked into playing anything other than a straight bat with the British press.

And will Wenger be back as CEO????

Probably not but would love it if so.

He wants to manage. But even that it seems difficult …

If he came back we may be in the same place we were before as he would still have to sanction signings, so it may be difficult.
Would love him to spot talent for us

That last para had me imagining the entire press pack doing “dead ants”.

yeah, and wenger was optimistic about wilshere

I get that players want to secure good contracts but I don’t really understand allowing talks to drag on for long periods of time. You either want to stay or you don’t. If I was already a multi-millionaire I wouldn’t haggle over money but contemplate the footballing side and legacy aspect instead.

I agree, but at the same time we cant know how we we’d feel in a similar situation, regardless of the money it is only a few years to earn it

Bu-hu. I’m norwegian and they make more money a year than I make in my whole working life.

And if I was missing from work 3 months a year I would be fired. Even in Norways.

I want to move there??

I like Ramsey but I won’t lose sleep if he goes. more lost balls and turnovers than goals and assists. If he wants to play funny buggers, I’ll drive him to the airport myself.

Not sure many Arsenal fans will shed a tear over Ramsey, but I would like him to stay most definitely. Ivan, however, should go, he won’t, however, he earns so much at Arsenal.