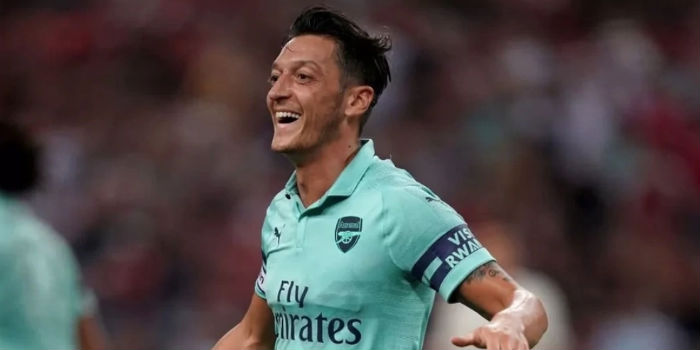 Unai Emery says he’s on the lookout for two more Arsenal captains after confirming those who’ve had the armband in pre-season are prime candidates for the six spots up for grabs this season.

On the eve of pre-season, the Spaniard mentioned he wanted five players to assume the responsibility with Laurent Koscielny, sidelined by injury until November, topping the hierarchy following the retirement of Per Mertesacker.

In the friendlies against Boreham Wood and Atletico Madrid, Petr Cech and Aaron Ramsey took the armband, while today Mesut Ozil was given the honour for the 5-1 win over a young Paris Saint Germain outfit.

After Saturday’s victory in Singapore, Emery appeared to confirm that those four would be joined by two more candidates.

“I think he [Ozil] can take the responsibility of a captain, but not forgetting Koscielny because he is captain as well,” he told reporters.

“Petr Cech and Aaron played as captains in friendly matches. I’m thinking maybe of one or two more players.”

He added: “I am giving you and I’m giving the player this position, but I’m not close.

“We are nearly finished, but like I am telling you, one is Koscielny but he’s injured. Then I am thinking of five more captains.”

It remains to be seen how formal Emery is expecting these ‘appointments’ to be. The role of club captain – something of a poisoned chalice in recent years – will likely sit with Koscielny.

After that, we’ll presumably need a couple of vice-captains…and then vice-vice captains? Who knows. Someone like Nacho Monreal wouldn’t be a bad shout in our eyes and Granit Xhaka might fancy his chances.

If Ramsey stays I would assume that he is more or less a safe starter with what he will be earning then. Torreira is our most expensive acquisition so far and highly rated by everyone at Arsenal. And if Emery plays a 4-3-3 as he did in all friendlies so far, that would only leave one more spot in midfield and surely that would be Özil. So I don’t doubt that Xhaka will get games and be an important player for us this season, but I don’t think he will be one of those starting practically every game. And I… Read more »

I totally disagree. Xhaka will be in his true position as a derensive midfielder and I expect to be a regular starter.

Xhaka is not a Defensive midfielder, just a midfielder who has to sit deeper

Sorry I meant a deep lying midfielder. A mental aberration.

Özil and Ramsey can’t be a part of the midfield three. It doesn’t matter if you put a bulldozer behind them, the midfield will still be overrun by good oppositions. It’s different if Emery starts Özil in the wing, then Ramsey, Xhaka, Torreira behind still makes sense.

Can’t see it being Xhaka if he’s not an automatic starter. Monreal may not be either and Ozil doesn’t come across like a “leader” type. Leaves Ramsey as an obvious choice.

Of course Xhaka will be an automatic starter.

When did Ramsey start every game? He is usually hamstrung for months every season.

He won’t even start

I love Rambo, now Santi gone he has to be alongside Bellerin as my current favourite player, but we can’t go into the season with this hanging over us, if he won’t sign? Then we need to put him on the market and move on, really hope he signs

I agree with you, but the problem is we can’t sell him if he doesn’t want to go. Sounds to me like he’s planning to see out the final year of his contract.

Xhaka and of course our best performer Monreal, are clear candidates for me.
Both have heart. Both have the quality to start each match.The latter is consistent, the former has occasional mistakes and lapses in concentration that can be fixed.
So:
1- Kos ( more honorary than actual )
2- Monreal
3- Xhaka
4- Cech
5- Ramsey
6- Ozil

Nacho? where the hell is the guy? Most teams have players back who played in the World cup re last nights matches even Ozil. Correct me but Monreal didn’t break sweat in Russia. So he should be in Singapore unless he’s injured or Emery told him he’s a reserve left back from now on.

I know a lot of Arsenal fans have reservations about Ozil donning the arm band but I for one relishes it. For some reason I feel giving him that role will force him out of his shell, who knows. Call me selfish or whatever but That’s just me campaigning for my favorite right there. Can you blame me?

I also think that all this stuff that has happened to him lately should motivate him to put in all he’s got to show all of them that he still got it. Maybe the armband would be additional help in that regard. But with or without armband, I expect this season to become by far Özil‘s best in an Arsenal kit.

I’m sorry but no. I’m a big fan of Ozil but there is no universe in which he is captain material.

I will say romsey if he hopefully stays

So is that 5 players that will be sitting out most of the season, like Per, Arteta?

He came on in the second half

Mesut didn’t look out of place as captain today. I could get on the Ozil captain train. So good to see him smiling ?

The easy games against a youth team when all is going well isn’t exactly when you need a captain.

Its when Spurs are gloating and leading by 2 goals or when United are rampant and we are playing like shit that we need someone to step up, grab the rest by the bollocks and start to squeeze some fight into the team.

Going by historical evidence, I have always felt Ozil to be the one who first needed a “grabbing by the bollocks” when things aren’t going as planned.

Why not make everyone captain?

Make everyone captain but some more captain than others.

I can see Mkhitaryan as captain

So Kos is club captain and whoever is the most senior player on the pitch in his absence is captain wears the arm band. I don’t see anything wrong with that. Bar Cech none of the players mentioned really have any classic ‘leadership qualities’ and would rather go down this route than thrust the club captaincy on someone like Ramsey or Ozil just so a starter has it. I think will actual help those players grow into the role. Also, whoever’s captain needs to start enforcing the one sleeve length rule again – too often last season players wore a… Read more »

First paragraph good, the second not so…:-)

It devolve into attire critique.

Whilst we are on sleeves, looks like we can also bring in an option for shorter shorts as some players clearly seem to have taken Alexis’s advise and are in need of showing more leg.

We need someone who will be held accountable.

More importantly someone who can drag the team when we hit a poor patch during a game.

Neither Ramsey or Ozil have natural fight in them.

Preferably we should have someone in midfield or deeper so they can also organise and see space.

All this 5 captians nonsense merely allows them the luxury to hide from responsibilities.

The captain doesn’t have to be the best player but he should show the most stomach for a fight IMO. Bottle.

I think Ramsey does have fight actually

With the embarrassment of riches in our midfield I am struggling to work out who will play the first PL game. Thoughts?

thoughts, we don’t have an embarrassment of midfielders, but we do have a lot

There is no riches in midfield.

Midfield has a lot to prove.

In an inverted 3 with Torreira at the base.

Likely the third player will be Ozil.

UP top will be Laca with Auba on the left, Mhki on the right.

We have numbers not riches.

I like this approach. Ozil, for example, isn’t someone I would’ve considered for the role but his ability and influence should make him a leader on the pitch. If you call the guy one of our captains you can expect him to do more to contribute to games. I’m not one of those who thinks he goes missing every game but some games suit him more than others. In games that don’t allow him to be at his best, it looks like Emery is still going to expect a lot from him as part of what is effectively a midfield… Read more »

Does captain actually mean anything anymore?
Tony Adams and Patrick Viera had very clear leadership qualities whilst other players in the respective teams showed leadership too
Since them the captaincy has been a contract bargaining tool- Henry, fabregas, van persie (and maybe Ramsey now) or an honorary title for non playing staff- vermaelen, Mertesacker and now koscielny.

This is the problem, there isn’t anyone for a while now to be held responsible for what goes on on the pitch. All this democratization nonsense or off field honorary captain rubbish. We need someone to be held accountable and someone who will drag the team when things look bleak (ala how Sagna scored that goal against Spurs) To me, we need not necessarily the best player but someone who is naturally vocal AND who wears success and failure on his sleeves. Jack was an obvious candidate but before that Flamini was a fighter. Also maybe Santi for BOTH technical… Read more »

Frankly don’t see the point of SO many captains. Defeats the purpose.

2 Captains should be MORE than enough.

So many captains merely lets them hide from responsibility.

With 6 captains he means that he wants to have 6 leaders/role models/hierarchy in the team who would help others to thrive, to lead them… He doesn’t mean captains per se.

no way is ozil a captain

Way! In fact the stance he took against the DFB displays perfectly why he should be one of the captains.

My first pick would definitely be Monreal and the other two candidates are Ozil and Mustafi. Probably now you are asking yourself why Mustafi but from what I have seen on the pitch he is a leader, always giving instructions, shouting to others what to do… Unfortunately for the time being he has his own issues to resolve first like keeping his concetration but I see him as our future captain if he stays. I was never in the “give the armband to Ramsey” bandwagon. Maybe because I don’t like his playing style. But I would be glad if someone… Read more »

You lost me at Mustafi..

You lost me at You

I really like what Emery is doing with the six captains. The six horsemen.

I think Rambo is the perfect guy after kosielny

How many captains can a ship have? Tell us who the captain is and the vice, Unai.

My captain Will be ozil

How many Captains can an army have? Is there only one captain of industry.

You’re looking at the term Captain in a narrower way than the manager.