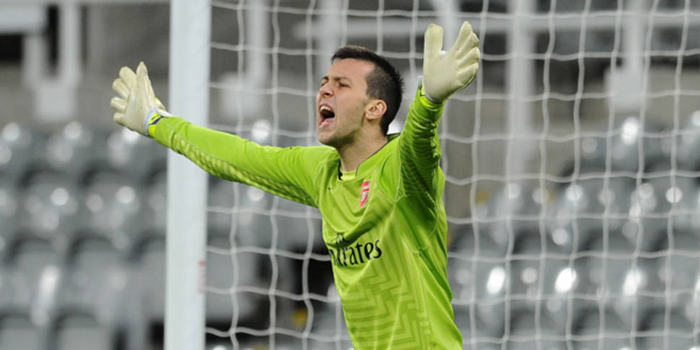 Deyan Iliev is now one of the longest serving players at Arsenal, with the goalkeeper having joined the club in 2012, but his chances of breaking into the first-team remain complicated by the presence of other young shot-stoppers.

Iliev’s time at Arsenal has had some low points, most notably when he was sidelined for two years due to a serious knee injury, but the 23-year-old, who has been involved with the Macedonia senior squad, remains highly regarded by the club, as demonstrated by the fact that he was offered a new contract at the conclusion of the campaign and also his involvement with the first-team in pre-season training so far.

Having signed the deal, Iliev will be seeking to build upon the progress that he made last season when he showed some significant signs of improvement with his performances for the U23s and also made the bench for the first-team in the EFL Cup.

Given his age, however, Iliev will have to take up a place in Arsenal’s Premier League and Europa League squads if he is to be eligible to feature in those competitions this season, and the goalkeeping situation is rather crowded at present, with Emiliano Martinez back from loan and Matt Macey also aiming to break into the senior squad.

Furthermore, if Iliev was to remain at Arsenal this campaign then it would deprive Joao Virginia, the club’s most talented young goalkeeper, the opportunity to establish himself as a regular in the U23 side.

Perhaps the best solution would be for Iliev to go out on loan and, hopefully, amass plenty of game time at a competitive level.

It would certainly be intriguing to see how he fares against senior opponents and his temporary departure would also let other young goalkeepers at the club continue their development.

Breaking into the first-team as a goalkeeper at a top club is a very difficult challenge indeed but Iliev isn’t prepared to give up just yet, as indicated by his decision to sign a new deal.

It will take something special for him to break into the squad but a loan spell could work wonders by giving him an opportunity to showcase his credentials on a regular basis.

Seems almost impossible that he’ll get anything like a chance. His only hope is to go out on loan and impress but even then we’d need to get rid of a goalie per transfer window for him even to be close.

I find it really strange that we have offered Iliev a new deal. I know that he previously had a terrible injury but before that he wasn’t exactly pulling up trees at age group level. We’ve just let go three goal keepers in Huddart, (you fool) Keto and Crean. We already have Matt Masey who although a little older was at least deemed good enough to play for the first team last season plus Martinez, Ospina, Cech and now Bernd Leno. If the club are so keen on giving Virginia the under 23s spot for next season then surely it… Read more »

“but a loan spell could work wonders ”

Usually doesn’t when we do it.