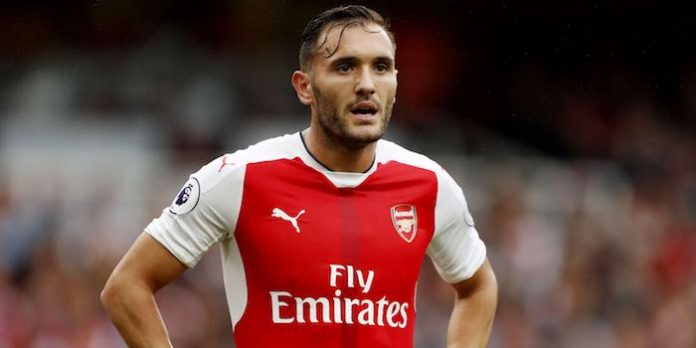 Lucas Perez remains a target for Lazio who are keen on adding the Spaniard as a backup striker to Ciro Immobile.

The 29-year-old striker returned to Arsenal this summer after an unhappy loan spell at boyhood club Deportivo La Coruna, who despite going out of their way to secure his loan signature last year turned down the chance to buy the player outright. Getting relegated from La Liga didn’t help.

Unai Emery included his compatriot in Arsenal’s squad for their two International Champions Cup games in Singapore, but his future at the Emirates has long been in doubt.

Gazetta dello Sport claims, that Lazio are increasingly confident of sealing a €6 million deal for the left-footed attacker after turning their attention away from Club Brugge’s 21-year-old Wesley.

They also claim Lucas is up for a move to the Stadio Olimpico because he’s mates with Luis Alberto, another former Deportivo player; that suggestion seems a little spurious given the latter played for Deportivo in 2015/16 when the former was a first team member at Arsenal. Maybe they were penpals?

The Gunners are due to play Lazio in Stockholm on 4 August, perhaps the two parties will thrash out a deal over a smörgåsbord…

Wouldn’t mind if we kept both. Plenty of Europa league and cup games to play. Not sure any of them want to stay as squad/fringe player’s though

Of course we should keep them both. We need as much strike power as possible

Sell then both and get two quality wingers in. Eddie is more than capable of being the third choice striker this year and playing in the Europa. We need pace and directness on the wings.

Strangly that is what both players can give us.

He is not a player who has really excelled in the last few years at either Deportivo or Arsenal. However, we will need a back up striker if Welbeck and Chuba depart, as that just leaves Eddie behind Lacazette and Aubameyang. Perez could still do a job for us.

Excelling is relative. 9 league goals in a relegated team and around 17 in a bottom of the table team the season before the long siesta in London looks good to me.
I doubt Suarez would score 20 at deportivo in a relegation season.

Wikipedia has him down as scoring 6 league goals in 32 games, less than 1 goal every 5 matches. He scored 1 in 11 for Arsenal. Not prolific, but that could improve with better players around him.

You have to remember that practically all the league matches were as a substitute he scored 7 goals and made a few assists too. He scored a hat trick on his Champions league debut so his record was not that bad.

“As that just leaves Eddie behind Lacazette and Aubameyang” I find that comment strange. Just how many games do people expect a 3rd choice striker to get? There’s a reason Giroud left, you know? Also, if a talented youthful academy striker can’t be 3rd choice, then what’s the point of having an academy? I know it’s great to all think this is like FM, but no 29 year old wants to be 3rd choice. In fact, which other top PL club has a top class prime striker as 3rd choice? City Have Aguero then Jesus, I can’t even name their… Read more »

€6 million?
Fucking keep him. Do they only want half of his body?

Yes please, let him go. I’ll throw in a tenner too.

Exactly why? Looked more than useful for us when given the chance. Even scored a hat trick in Champions League.

He was OK against lesser opposition, mostly in cup games. Overall, I don’t think he has the quality to play for Arsenal and was one of the worst signings of the Wenger era for me.

One of the worst signings? Really?
In an era that had Amaury Bischoff, Sanogo, Park, Baptista, that guy we signed on loan injured (decent player though, but bad signing), c*nty Gallas, Almunia, etc. You really think Perez was the worst?

Give me a break.

Bang on Faisal. Totally agree.
Anybody who watched Perez knows he is, in fact, top quality.

(Except perhaps some who want to see gareth bale do fancy/lucky tricks all the time, just like in FIFA video games ….)

Did you call him “that guy we signed on loan injured” because you couldn’t spell Kjallstrom? Or is it Kjalstrom?

Swegooner
Reply to  A Different George

Lucas cost 18 million. Most of the other signings you mention cost a lot less. Second worst signing would be Andre Santos in my opinion.

If the team functions the way would all like to see it function then “lesser teams” would be pretty much everyone we play against. Perez would then easily be our top scorer. I’ll be happy if it happens.

He never really got the chance to play against top teams so that’s nit really fair.

By any chance, would they be interested in some tall, relatively fast, hardworking, not a striker, not a winger but somewhere in between striker? Poor at finishing and 27ish but yet to realise his “potential” with only a year left on his contract.

You can’t put a price tag on those elite fake air assists though.

If not interested in bringing more attacking options then leave our Lukas, he still has some ingredients to add to our club.
But i would prefer selling welbeck n bring Coman

Forget about Coman. That’s a load of bullshit and he’s said he wants to stay about Bayern. I’d be happy with him but it’s not happening.

Don’t think Hoeness will want to have anything to do with Arsenal this summer. Ozil’s agent effectively just called him a racist old fart.

I was impressed that Ozil’s agent made no reference to Hoeness’ inability to be present at the Rio World Cup because he was in prison at the time. Terrific self-restraint that I, as I have shown, cannot match.

€6million?????
If he’s available for £5.3 million?
Then surely PL clubs would be lining up around the block.
I get that we’re in an extremely weak selling position as we have too many numbers, and surplus players will be on big wages, but I’d rather keep Perez than sell him for €6mill

Omg, we don’t sell him for €6mill, it’s just his possible contract to Lazio.

Lucas signed for Arsenal in summer 2016

I hope he stays. He literally performed every opportunity he got with us 2 seasons ago, yet never seemed to be in the running to start. Not to mention we are short of wide players. He created the second most chances in La Liga or something ridiculous like that in a team that got relegated. Imagine what he could do creating those changes with Auba and Laca?

Keep the man. He deserves the chance he never got under Arsene.

Sell Lucas, welbeck and elneny now and bring in Nzonzi and lonzano

Personally prefer Elneny to an overrated 29 year old N’Zonzi who is also overpriced.

A Different George
Reply to  Martin

I was surprised and impressed with N’Zonzi’s performance for France, after his general mediocrity in England; certainly in the final, when he came on for the apparently ill Kante, France looked better, not worse. I recently watched the French TV World Cup squad presentation show, and the moderator asks Deschamps “why N’Zonzi?” and Deschamps, pretty clearly annoyed for probably the only time in the whole program, answers “why not N’Zonzi?” before actually giving some reasons involving choosing a whole team, not just a bunch of stars. Maybe he was thinking of his own role in 1998. But, like you, I… Read more »

I would not want him either, reminds me of the sissoko whom the c*nts paid alot for nothing after an ok euro.

Santori? Is that you?

Sell Elneny, he’s now behind every one in plane.

I’d like Lucas to join us this season and act as a back up to Lacazette and Aubameyang.