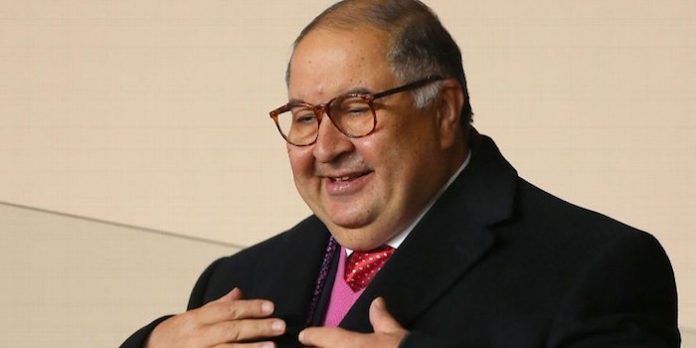 According to the Financial Times, Alisher Usmanov is ‘actively exploring a sale of his stake’ in Arsenal, having come to the conclusion that he will never be anything other than a minority shareholder.

The Russian oligarch has made offers to Stan Kroenke in the past to purchase the 67.09% held by the American and his KSE holding company, but has been rebuffed each time.

The report quotes an insider who says, “He was really frustrated that Kroenke wouldn’t sell at any price and now just wants out.”

The difficult for Usmanov is that it’s not exactly an easy sale to make. He has no seat on the board, and trying to convince anybody to pay hundreds of millions of pounds so they can be similarly excluded by Kroenke seems nigh on impossible.

The conclusion one might come to then is that in order to make the sale, and to perhaps reinvest in another club, the only obvious buyer is the current majority shareholder.

Usmanov has expressed an unwillngness to sell to his great rival in the past, but the reality of the situation may leave him with no other option. Who pays that much money to own shares but have no influence on the running of the club? And why would Kroenke allow anyone else to join the board?

If the sale between the two men were to happen, then Kroenke would own 97.13% of the club’s shares, allowing him under current rules to compulsorily purchase all remaining shares and take the club private.

Usmanov’s former partner in Red and White Holdings, Farhad Moshiri, took a 49.9% stake in Everton two years ago, and it’s long been mooted that the two could join up again. That purchase was the subject of an investigation late last year.

From an Arsenal perspective though, this is a somewhat worrying development and a significant change in position from Usmanov.

Never been a fan of privatising clubs. Clubs for me anyways, are for the fans and the community in general not individuals! But reality is its the way of the world. And tbh not unexpected that this day was going to come.

Let’s all pool in some money and buy the fuck out of kroenke and usmanov!

I’m with you on this one. Let the arsenal community stake it’s claim!

Easier said than done, cooperative principles usually don’t work in wealthy societies. Although I don’t support non democratic Arsenal board. Usmanov should have some say in board matters. Why don’t fans uncle Stan to include minority stakeholder to be on board??

Because Uncle Stan doesn’t give a shit.

You will need TRUCKLOADS of money

I’ll give him a lift to Everton for one of his shares.

What would the consequences of kroenke taking arsenal private be?

Mostly in terms of corporate governance. He will not be obliged to disclose information, finances, etc.

The £3million he took two summers straight without any legal tender, would likely become a drop in the ocean. He’s previously stated on record that he see’s no problem with owners taking dividends. There’s two ways of looking at it, he’ll milk us dry at every opportunity with giant yearly dividends, whilst using any capital as leverage in other projects and moving us to a low tax, low regulation jurisdiction. Alternatively, as the soul owner it would be easier for him to invest in the club, because any return on investment would be 100% his. I find this unlikely though…… Read more »

while I can’t speak for your comments, I am fully behind Arsenal getting a soul owner, there are a few good candidates I can think of, Wenger, Henry Mr Arsenal.

Marvin Gaye is surely the only soul owner worth suggesting 😉

You want Wenger or Henry to own Arsenal? haha…Let’s wait for them to become Billionaires first. Don’t forget we are still waiting for Flamini.

Flamoney with his magic fule will rule the world soon. It’s all going to be ok just hold on till then.

To be a soul owner, you must possess either one of the soul edge or the soul calibur.

Alternatively you can get your hands on a philosopher’s stone.

I’m not a fan of Kroenke but he does appear to be spending a ton of money on the LA Rams, new stadium, a bunch of star players. Maybe we’ll start seeing some of that with Usmanov out of the picture although I wouldn’t hold my breath!

The taxpayers are paying for the stadium.

And his MLS team is the worst in the division by some distance. Would have been relegated ages ago if it was possible. Think “Sunderland” bad.

Even now this club is not being run,built or invested into to be a title winning team. It’s all about the top 4 and always will be. While times are more exciting without wenger and I have no doubt the performances will improve and excitement levels will rise, under this ownership we will never invest at the right levels to win or genuinely compete for the title.

I think he could loan / leverage the fuck out of the club to pay for more ranches / other sports franchises and the fans would never know for sure.
Who or how much hock the club is in until the worst happens.

No “informative” q&a at the AGM. Because no more AGM.

I think usmanov has eaten his shares!!!

Here comes the Nigerian Billionaire. He is Arsenal through and through. He has the money and the passion to go with it as well.

And will face the same consequences like usmanov if he is going for those 30 percent shares. I do remember him saying he will buy in full a couple years back in several interviews. Never heard of him since…

Gradually things are getting twisted in Arsenal…….

by the way I thought there was a man called Dangote who is interested. After all between 2 evils we have to choose one. And they say, the devil you know is better than the angel you don’t know.

No matter what happens I remain An Arsenal Ambassador and we are d best club in the world….. You can go and argue with your ancestors

The world is fast changing at least in Arsenal’s eyes. The thought Kroenke changing to a sole owner scares me.

For some reason, if he sells, I want him to buy Everton with his pal then we see what they are capable of doing as they talked the talk

As I sadly believe that he will walk the walk

Look at Everton since usmanovs mate bought them. OK so fat Sam and RK were shit managers for them but they are spending and buying a higher. Lass of player than they have ever tried before.
With usmanovs money expect them to spend like Chelsea or City.

I wouldn’t put it past usmanov, looking at abramavic and seeing a chance for a new owner to come in to the league whom spends big.

I think we are exaggerating how bad Kroenke is. I know some fans think he should be much more actively involved in the club, but to say he’s a *bad* influence is reactive. This talk about him pillaging the club is nonsense.

Dear Savage, please educate us on the angelic side of Kroenke since you appear to know.

Kroenke is a money grabbing cunt and don’t give a flying fuck about Arsenal.

If Arsenal don’t make him any money, then he is not happy. So what makes you think he wouldn’t want Arsenal to be successful in order to make him more money?

Please have a look at the resurgence the LA (previously St. Louis) Rams have had in the last 2 years.

Kroenke is happy if we make money. End of. Is that what you want for Arsenal? Money? The rams is a great example of what a major twat he is. He said he wouldn’t move the club when he bought it and what did he do? What do you think he would do with Arsenal, as a sole owner, if there where more money to be made by moving the franchise to USA? He has nothing to do with the success of the rams. That’s down to blind luck by hiring Sean McVay, an untested, young coach on the cheap.… Read more »

Ok, not defending Kroenke here but there is zero chance that he ever moves the club – much less to the US where they couldn’t compete in the PL. Do you think the club increases in value by moving it to Bristol?

If Kroenke takes full ownership then it really will be the beginning of the end of Arsenal. Staying in the Premier League would be the only real goal.

I support my club 100%, but when it’s not your club anymore and owned fully by one man with no ambition, are you still expected to support it?

Of course not. You’d be expected to “follow” the team and buy lots of hotdogs and even more “London Guns” merchandise.

Interesting that a few people have thumbed down my comment but can’t think of a response/don’t want to justify their rating..

Is M. Flamini the wealthiest person on earth yet? We need saving

Red Alert ☹️ No way has Kronke got the money. Not unless some kind soul has agreed to build his new Rams stadium in LA for nothing. He doesn’t have the money for that, let alone the money required to buy Usmanov out.

The alternative is that he loads Arsenal with debt in a manner that makes the Glaziers seem modest. Let’s hope the report is wrong. Big time Wrong.

I think you answered your initial assertion! Raising £300m or so to buy out Usmanov means Kroenke not only owns the club, but the prime real estate the club owns too (Stadium, Colney, Hale End). That’s at least £700m (probably more) in property assists to run debts up against off the bat or sell off, neither of which he can do at the moment. And that’s not taking into account the club’s assets as a business. Finding cash to buy out Usmanov theoretically puts him in a far better position to build the new stadium in LA. Anyway, I really… Read more »

We could end up supporting the “L.A. Guns” on a ground sharing deal to give Kroenke the chance to personally check for lost coins in the stadium’s urinals.

Yup. Blogs, the time has come for you to rally the millions of faithful followers to raise funds and buy both usmanov and kronke out. We’ll make you chairman and you can rename to Arseblog Stadium

I’m holding great hope that as usmanov dislikes kroenke he puts his shares in either a trust for the fans or allows a fan trust to buy them. Certainly throw a spanner in the works for kroenke with the bad publicity if he didn’t allow a fan shareholding a seat on the board. If a fan trust owned 30% it could really hold the club to account and prevent poor mgt

So now we’re just waiting for that African billionaire to buy everyone out?

Another dodgy billionaire looking for some legitimacy.No thanks.

Deciding whether he’s legitimate or not, is not our business.
There are legal systems and governing bodies in place just for that sort of thing.
We care about football and only football..

How do you come to this conclusion? Because he is African or What?

Kroenke as the sole and private owner of my Arsenal!
That’s a scary notion..

To me when I line up the choices it’s a matter of who’s most stable. Both economically and in decision making.

I just don’t want some wing-nut that hauls off folks on a whim, or meddles in the daily affairs of the squad like they’re playthings. It’d also be nice if they don’t have any blood on their hands or corrupt practices, I suppose.