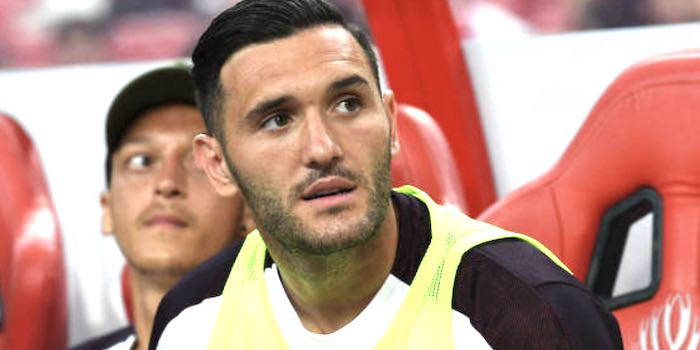 West Ham United have made an offer to Arsenal for Lucas Perez, according to the player’s representative.

The 29-year-old was part of the squad that played two matches in Singapore but missed the most recent friendlies with Chelsea and Lazio.

“I know that West Ham want him and they have made an offer,” Lucas’s agent Rodrigo Fernandez Lovelle told ESPN FC.

“It is an option. Lucas is happy at Arsenal but he wants to play regularly and West Ham is an option for him.

“In Spain there are also interest from some clubs, but they are not willing to assume the transfer.”

Over the weekend, it was also reported that Sporting Lisbon had approached Arsenal about Perez. It sounds as though we’re ready to cut a deal to get the player’s wages off the books.

Having signed from Deportivo La Coruna just two years ago for £17 million, it looks as though we’re willing to take a big hit on the financial front.

It looks as though Calum Chambers will be moving to Fulham on a season-long loan, Danny Welbeck has been told he can leave and the likes of Joel Campbell, Carl Jenkinson and David Ospina could also move on before the end of August.

Emery: We’re enjoying each moment with the fans

With Perez nearly out and Welbeck told to leave.. I’m getting more and more certain we’ll see a new winger in.
Then it’ll all be worth it.

There is none in the market

We could’ve paid the 13m for Shaqiri. Peanuts in this market.
Leon Baily – Zaha – Dembele – etc..

i cant see dembelle coming here any time soon and even coman from bayern. but bailey is seriously a good option. guy is destined for big things. if not we should atleast get zaha . there is no better fallback option right now than him. but none would come cheap.

Ramsey and maybe 2 or 3 others will go but doubt any more will come in.
Ramsey is being left to the last minute so we have no time for a replacement. It’s all about the money on both sides sadly. The manager has changed but I don’t think the club and its attitude to spending money has.

We’ve brought in 4 decent additions well in advance. So I think the policy is certainly better than it was.

I agree but to possibly lose a player that the manager has already said he wants to build the team around stinks of profiteering at such a late stage with no replacement.

Bailey would be exciting. Dembele would be the dream but I have no idea who we will sign. I’m glad it wasn’t Shaqiri. So glad to see that the club have a plan. If we sell Ramsey, Lucas and Welbeck and buy Nonzi a defender and even a young pacy winger, I’d be happy. These are the players we’re being linked with. And if it turns out that was all part of the plan then I’d be impressed. It’s been years since we could definitely say we were in a better place for the new season. In Ramsey and Welbeck’s… Read more »

I’d rather keep Perez then have Shaqiri. Most inconsistent player, poor attitude off the pitch – especially in training. And is a bit of a cunt. No thanks.

Julian Brandt for me. Made some classy cameos in the WC

Out of left field and again maybe issues with salary but Carrasco in China.

Worth noting as well Axel Witsel just moved back to Europe from China.

Carrasco is only 24yrs. Left sided player but inverted as he is predominantly right footed.

The problem now is the monkey business with the Cback may mean we will not be looking at a wide player.

Aulas in a tricky character to deal with but clearly Fekir’s Liverpool dream move has been hijacked by the cheaper Shaqiri option taken.

I think we could lose two of Campbell/Perez/Welbz without the need for replacements, as I think we’ll see a little more from Nketiah and Nelson this season, but if we lose all three? Surely we’ll need another body?

I don’t really understand this sentiment. Campbell and Perez were both on loan last year and Welbeck rarely played. If we sell all three and promote Nketiah and Nelson we’re effectively ahead one.

I feel like this is a common refrain amongst Arsenal fans, selling unused players and then asking how we’re going to replace them. It’s as if the word “surplus” doesn’t exist.

My worry without Welbeck would be height and power.

Other than that if we fetch a good price for both Campbell (likely gone cos he has not featured pre-season) or Perez, cash in now.

Nelson can give us something wide right this season.

Ozil and to some extent Mhki are better through the middle. They have no pace although Mhki can finesse his way on one flank if we have speed on another.

Nelson is a bit of an odd one as more game time might be part of convincing him to stay, but at some point why play a youngster who is refusing to sign a new deal.

BC we have little options beyond.

Might as well use him, he hasn’t cost us much (being from the Academy) and his value will only go up if he does well for us so we sell him for more worse case scenario.

And we still have benefit of someone quick out wide which is a precious commodity at the moment.

I don’t see ANY downside.

The other thing about playing Nelson would be IF we lose Chambers on loan, and one (or both of) Welbeck and Ramsey are sold, we need to cycle in younger players to make home grown.

Never understood what goes on when it comes to this guy

Funny how things change in 12 months – I remember Perez’s agent very publicly rejecting the notion that his client would even consider joining a West Ham, Newcastle or Levante, forcing the Depor move through. Good luck to the lad if he moves on, he needs the kind of game time we’re not going to give him at Arsenal.

It’s never been more transparent that this guy is just in it for the money. I never held anything against him but now he’s holding the club random because no one will pay the wages he’s been getting here. And now he claims he’s happy at arsenal so that we are forced to sell him for pennies so that he can keep making more money than he has rightfully earned. I hate players that only care about money

Our fault not his. We get ourselves into this position too often. That’s what happens when you take too many long shots on players. Pay a little more for a proven talent.

I guess, but his lack of ambition really bugs me

Lack of ambition? What the fuck does that even mean, especially with respect to Perez?
He left Deportivo to come play at our club, Arsenal in the Premier league and fight for a place in the starting line up.
Oh right, facts, not your thing.

What are you so mad about? I also recall him being pretty eager to go back to deportivo and try to secure a move back there so what exactly are you talking about? He hasn’t looked very good anywhere he has played recently and the fact he isn’t willing to accept a pay cut and go somewhere else alreadyvis plain dumb. Debuchy did it. Not sure why I’m stepping on so many toes here. In contrast you have elneny who showed alot of ambition and hard work, even though his isn’t the most dazzling or gifted player. But that’s just… Read more »

we signed him and didn’t play him…don’t see how that’s the player’s fault. The money issue, would you take a 50% pay cut in your job? Didn’t think so.

Either he gets a wage closer to what he’s making or Arsenal subsidize the wage to clear more room….

I don’t understand getting rid of both Perez and Welbeck….

Actually I don’t think he’s in it just for the money. Though would you take a 50% paycut ? His dad actually lives in London. So after all the back and forth if he can stay in london near family and make good money why wouldn’t he?

Interesting. We seem to be getting rid of a lot of the deadwood upfront but no one is coming in to replace them. Let’s hope that we have the significant back up to cover any injuries to Laca and/or Auba.

We have got no contigency plans! We are the Arsenal remember?

The back up IF we should sell Campbell, Perez AND Welbeck would have to be Nketiah.

My only concern there would be we may miss the more direct ability Welbeck can bear in with in height and power.

This would have to be one of the weirdest signings and subsequent treatment of a player that I can remember.

santori
Reply to  Men With Ven

“Lucas is happy at Arsenal”

Now that is obviously bullshit.

He is Happy at Arsenal but he will be Happier at West Ham blowing bubbles.

Pogba to Barcelona and they sell Dembele to us to finance the deal? One can dream, after all they just bought Malcom so they have options in the front three.

True, but they have lost both Iniesta and Paulinho so another midfield addition might be welcomed.

I doubt they will get rid of Dembele. Messi is aging and they may give him another season.

Coman is another at Bayern hasn’t really sparkled since move but just invested plus aging wingers in Robben Robbery so may be kept a bit longer.

Then there’s the issue of if Mbappe stays permanently at PSG, they may have sold enough to clear FFP already.

And of course Martial is itching to leave.

I doubt we will get a wideman if we need yet another Cback to get things right.

BUT we could easily get David Neres at Ajax also 21yrs, or Lozano at PSV who had an excellent world cup and is only 22yrs. Neither will break the bank.

I don’t believe we need an older player here. In fact if anything, we could risk some upside with a young player who is a bit fearless.

Perez only played a couple of games for us and looked good. Wenger then had him in training over the following months and decided he wasn’t good enough. Fans react like we had T.Henry on the bench but played Bentner
Perez forces a loan to boyhood club and flops. Emery also sees him in Pre Season and agrees he is not good enough. Keen to get rid.
No debate. Get what we can from Wham! and move on.

He didn’t get a long enough run in the squad even to settle.

But we were in so dire need of results was the problem. It was almost like we could not afford to give him the time bc we needed the goals right then.

I felt his valuation in Portugal was a tad low.

The worse deal was Debuchy.

We can still salvage something out of this one.

Frankly we have spent 60-70m thus far not factoring any further spend on Cback.

We won’t cover our total spend likely but we will get closer to parity which is fine since we have money in reserve enough to play with.

BUT it may also impact any potential for the purchase of a wide player.

Can we sell all the deadwood and bring in Martial? With a decent coach he could be phenomenal, that kid looks the closest thing to Henry I had seen when he first joined manure. I’d love t see him at Arsenal.