THE LOWDOWN
Arsenal Women kick off their season with the defence of their FAWSL Continental Tyres Cup. The girls won the trophy back in March with a 1-0 victory over Manchester City in the final at Wycombe Wanderers’ Adams Park. The Gunners are drawn in a group with West Ham, Charlton, Lewes and Millwall, whom they will play once each.

West Ham have invested heavily in their squad over the summer having been elected to the FAWSL top flight. Experienced campaigners such as Claire Rafferty, Gilly Flaherty, Jane Ross and Kate Longhurst have joined the Irons’ revolution. West Ham also picked up goalkeeper Anna Moorhouse and centre-half Vyan Sampson from Arsenal this summer.

It’s the first competitive match of the season for both sides, with the league season beginning on September 9th. Arsenal finalised their pre-season prep with a 2-1 win over Montpellier and a 2-2 draw with Paris Saint Germain in Toulouse last weekend to win the Toulouse International Ladies Cup.

TEAM NEWS
Jordan Nobbs and Jessica Samuelsson both played minutes in Toulouse. Jordan underwent minor foot surgery over the summer, while Samuelsson has been recovering from a far more serious foot problem that has sidelined her for the last ten months. Jessica may well be eased in with another substitute appearance, but Jordan will likely start.

Elsewhere, Tabea Kemme, Dan Carter and Viki Schnaderbeck are all out with medium to long term knee injuries. Viki is looking to return around Christmas. Vivianne Miedema should be fine after taking a slight knock on her knee out in France. Back up goalkeeper Pauline Peyraud-Magnin has returned and may start, as the Gunners often use their reserve goalkeeper in the cups.

A BIG right hand from Pauline earlier on ✋

Leah Williamson and Danielle van de Donk did not appear in the training videos the club posted on Wednesday, but there is no immediate suggestion that either player will miss this game. Though injury news tends not to be disseminated publicly in women’s football where clubs can help it.

LAST TIME OUT
I *think* the teams last met in the FA Cup in January 2008, with Arsenal running out 8-1 winners at Meadow Park. Goal scorers for the Gunners that day were Lianne Sanderson (2), Gemma Davison, Kelly Smith, Mary Phillip, Rachel Yankey, Karen Carney and an own goal. Arsenal went on to win the competition that year. 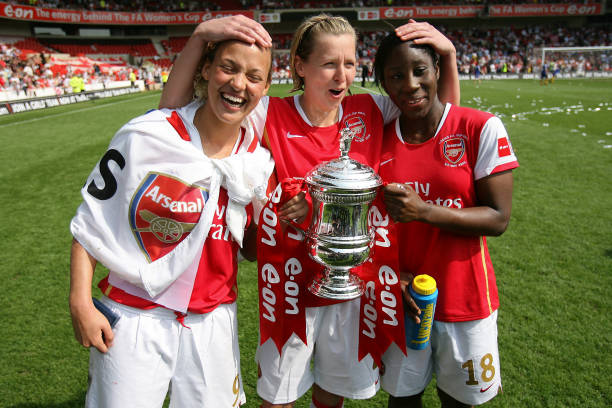 PLAYER TO WATCH
Irish international captain Katie McCabe has fought her way back into the reckoning at Arsenal after being loaned out to Glasgow City for the first half of last season. McCabe can play at left-back but has spent much of pre-season in her favoured position on the wing. She often swaps between the left and right flanks in game, but prefers to play from the left. 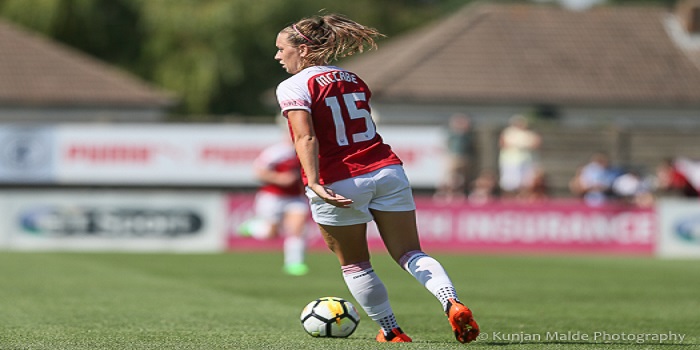 McCabe possesses a good delivery with her left-foot and is athletic enough to bomb up and down the touchline. With Dan Carter injured, Heather O’Reilly departed and Tabea Kemme injured, spaces have opened up in the wide positions and McCabe will want to continue staking her claim as a wide forward while the opportunity persists.

HOW TO CATCH THE GAME
The game is not being televised, so if you can’t make it to Meadow Park, following the official Arsenal Women twitter feed is your best bet. Highlights are not even a guarantee for Conti Cup group games. Scope for improvement from the WSL when it comes to this competition.

For a little more information on ticketing and the matchday experience at Meadow Park, why not check out my Beginners Guide to Arsenal Women from earlier this week.

COMING UP
I will have match reaction from a player straight after the game, which will be published on Arseblog News on Sunday evening. I am also hoping to interview Jess Samuelsson about her long injury layoff in her debut season in England, look out for that in advance of the Liverpool game on 9th September.