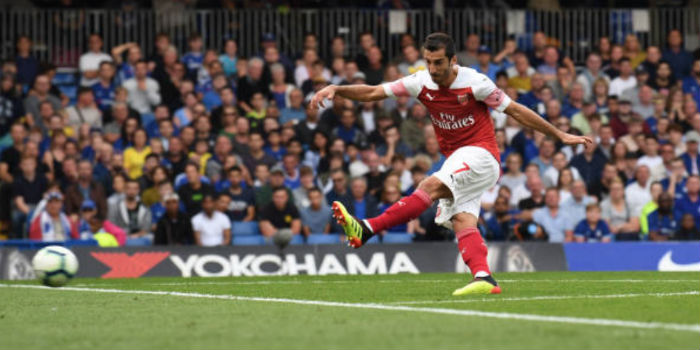 Earlier today Arsenal were drawn against Azerbaijani champions Qarabag in the group stage of the Europa League.

This presents something of a problem for the Gunners as due to a conflict between Azerbaijan and Armenia, the government there has placed a ban on any Armenian citizen entering the country.

Although an exception was made for the 2015 European games, it remains to be seen if they would do likewise for an individual, and that could force Arsenal to leave the former Borussia Dortmund man at home.

It might also come into play should we progress the final which is due to take place at the Olympic Stadium in Baku, Azerbaijan on 29 May 2019.

It’s an issue the 29 year old has had to deal with before when Dortmund faced Gabala in the Europa League in 2015, the German side decided to leave him out of the squad citing ‘security concerns’ as the reason for his absence.

Frankly, if this restriction is in place, UEFA need to think very carefully about the participation of clubs from nations with such restrictive practices.

We’ll try and get some more clarification on this and update here on site as soon as we have it.

“Frankly, if this restriction is in place, UEFA need to think very carefully about the participation of clubs from nations with such restrictive practices.” UEFA think in non-monetary terms? Ha!

To be fair to UEFA, in our last season in the champions league, we played PSG minus Serge Aurier (sp) because he couldn’t be allowed in England.

That was due to suspected criminal activity in his own part though. Not politics. What UEFA REALLY needs to fix is not allowing countries with these kinds of conflicts and policies and potential threats to the safety of the players (or anyone involved at all, really) to host the damned final! It’s absolute shite that they’d give the final to a country where a key player from a club that could very well get to or near the final could be banned or his safety threatened. I realize that means probably half the countries represented in Europa, but all the… Read more »

It’s not about who he is, I mean imagine he was the star player of one of the really obscure teams.
His exclusion could be devastating to them.
He should get a sporting exemption, as much as I agree sport should be used to help politics it shouldn’t dictate what happens in whole countries.
Can you imagine if fifa had that power and their corruption? Orwell would be proud.

Easy: Move their home tie to neutral ground. It simply can’t be the case that they profit from such a stupid law. Although, of course, we could just let it slide, win it and dedicate it explicitly to Mkhi

UEFA should force those clubs to play their home games at a neutral site outside of Azerbaijan.

As should the Final if we make it!
A country that won’t allow a sportsman and can’t guarantee his safety and freedom to perform without xenophobic harassment does not deserve the event.

For as mighty as the Mighty Qarabag are I think we’ll manage that one without Mkhitaryan.

But if we (potentially) can’t use him for the final, that’s a bloody disgrace

Im sure we’ll cope with out him..politics and football never far from each other, like a marriage made in hell.

I hope the club doesn’t just think like “We’ll be OK without him on this one.”
We should stir an international crisis if he’s banned.

Either we all go together?
Or we all stay at home together?
There’s no third option.

The term racist and xenophobic get thrown around far too casually at times, at those with legitimate concerns surrounding aspects of immigration and the social consequences of it.
But this is an actual instance where there is clear xenophobic behaviour.

UEFA need to be firm on this, and if not? The club should withdraw and refuse to play.

You have to question the suitability of choosing a country to hold a UEFA final, who won’t allow citizens of certain countries to participate.

Not defending it but it’s not entirely ‘racist’.

Definitely agree the final shouldn’t be held there.

Options out wide are limited.

Bellerin and Lichsteiner in tandem on the right is a possibility or Iwobi right.

In any case its Qarabag so probably even a Ramsey (not his best position) may suffice. Or maybe AMN if he should return from injury.

While we’re on this subject perhaps FIFA could take the same approach to countries which won’t allow entry on an Israeli passport – like Iran, or Qatar.

I’d like Arsenal to take a strong stand now that they won’t travel to Azerbaijan at all unless all players are allowed in. If Azerbaijan/Qarabag sticks with this ridiculous policy, I would hope that Arsenal actually BOYCOTT the game (and encourage our fellow Group E teams to follow suit), even if it cost us 3 points.

With so much hate and self-seriousness in the world today, it’s time for powerful entities to show moral leadership and take a stand for the little guy.

UEFA (and FIFA) are terrified of the politics, arsenal would be the ones to be punished

This highlights the reality that the US’s travel ban will have similar implications on the World Cup. A country that bans people from so many countries should not be allowed to host such a tournament, though it breaks my heart to say so given that it’s my best chance to ever attend a world cup.

This should be a major question to be asked when giving a hosting right to any nation…..

Are all countries eligible to participate?

I think Arsenal should not just fold their arms and accept the verdict.