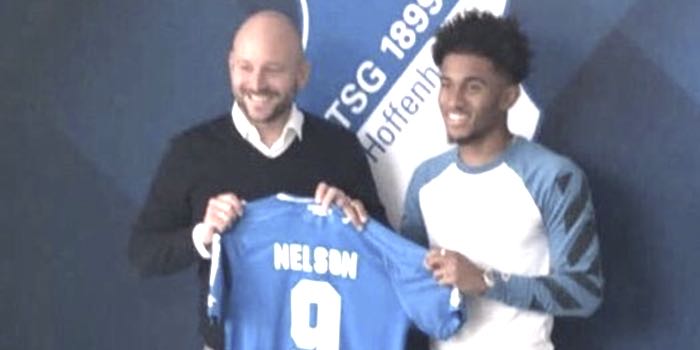 Reiss Nelson has joined Hoffenheim on loan for the duration of the 2018-19 season.

The 18 year old will play for the Bundesliga club, who are in the same Champions League group as Man City, after Unai Emery gave his go-ahead for the exciting forward to leave the club despite the fact he was likely to feature heavily for in the Europa League and Carabao Cup.

Speaking at his pre-Cardiff press conference, the new boss said, “We think he needs to go because he is very young, he needs minutes and the experience.

“We decided together it is a good chance for him, to get the minutes and then come back to us.

“I think he’s signing a new contract with us.”

It’s a fantastic opportunity for Nelson to go and play in a different league, and gain all the benefits of a move abroad, while for Arsenal it’s another year in his development and hopefully he’ll return to us ready to press for the first team next season.

Good luck to him, and let’s hope we get confirmation of that new deal soon.

Arteta: Nelson is doing all the right things

That’s great for Nelson, the start of him maturing, coming back to be an Arsenal legend and getting his own Column outside the stadium.

Arsenal casually sending off their LAST winger in the squad.
Just another Tuesday.

Leno me, I’ll be your friend
Reply to  Red-Sky

Rather surprised you’re getting thumbed down just because people aren’t aware of the phrase. Well maybe not surprised, this is the internet after all…

For those unaware it means ‘par for the course’, it’s a phrase usually used as a sarcastic/cynical reply to a seemingly bewildering suggestion/statement.

To balance, I gave you my two thumbs up, Red-Sky, though this in fact just deleted the first thumb up. I could probably change it, but you know, effort and all that. Plus I’m now bloody and thumbless.

Monkey knees
Reply to  Leno me, I’ll be your friend

I was a languages teacher for years, and never heard that phrase. So, no, it’s not commonplace, at all.

Leno me, I’ll be your friend
Reply to  Monkey knees

Never said it was common place pal, just that I’m surprised people were giving him thumbs down for not being aware of it. I studied english and spanish at MA level and I’m still finding new phrases/nuances etc every time I talk to others 🙂

John
Reply to  Leno me, I’ll be your friend

First time I watched Sancho play for BVB, I was very impressed. I had no idea he was English. It’s a brave move for Nelson and hopefully he does well there too. Also, I watched a lot of Hoffe games on TV last season because of Gnabry and he was their best player 100%. They played a counter attacking system at high pace and it was enjoyable to watch. Hopefully Nelson finds a starting spot soon and does well. As for the new deal? We look shafted if he does well. Nothing escapes the eye of Bayern in the bundesliga… Read more »

Maybe he won’t follow the recent trend and this loan will be a positive for all. Young players really need to be brave and make these kind of loans rather than a handful of cup games for the whole season and another year gone. Get out their and make a difference. Good luck to him.

Really brilliant to have one of our brightest talents committing his future to the club, and going to a well-managed club like hoffenheim, who play good football. Looking forward to an impressive season from him, playing week-in and week-out and learning and developing further. Also gives smith-rowe more chances to impress in the europa league/league cup

Great move for him, should even get some Champions League experience which will obviously prove useful for us next year… They have a pretty tough group with City, Shakhtar and Lyon.

Good for Nelson. Not so good for us (Short term) We lack options out wide. We have Iwobi who is probably closest to a wide player for us and I suppose Aubameyang can fill left as well particularly if Welbeck ups his game and Lacazette gets more starts (Seeing that he has improved on his hold up game) On the right, we are a bit more lacking. Mhkitaryan is more a hybrid between an attacking mid/winger. He doesn’t have the pace or trickery to entirely beat his opponent. Which is the reason why Bellerin still bombs forward to make the… Read more »

I fear we have seen the last of this amazing youth academy and genuine first team prospect. If he does well in the bundesliga he will leave on a free next year

Why would he leave on a free when he’s just signed a new contract?