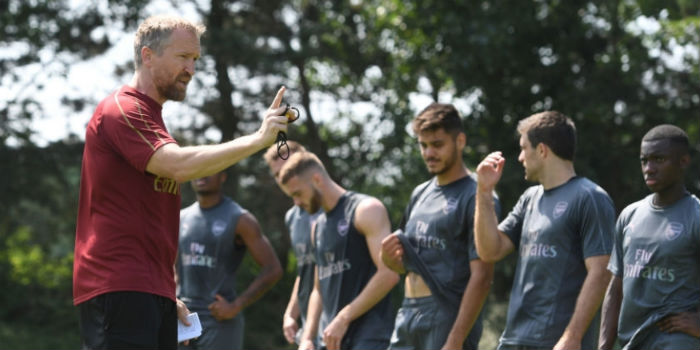 Darren Burgess, the Head of Elite Performance at Arsenal, believes social media can affect the mental and physical wellbeing of elite athletes and revealed that phones have subsequently been banned from recovery stations at the Gunners training base.

Working alongside Gary O’Driscoll, the Head of Medical Services, the Australian, who joined the Gunners from AFL outfit Port Adelaide in July 2017, has spent the summer restructuring the set-up at the club’s Player Performance Centre at London Colney, including improvements on the technology side and tweaks to the staffing hierarchy.

Mitigating the risk of injury is at the core of everything Burgess’ team does with attention to detail key to the marginal gains that make the difference at the highest level.

Speaking to the RTS podcast, Burgess explained: “Most of the time we enforce a rule that you can’t have your phones in the massage room.

“We’ve got guys who have over 10, 11 million followers on Instagram. They just have to send out an innocent message and probably 100,000 people are going to send back an abusive one if they’ve had a bad game.

“That creates a stress that has an impact on them physically and certainly mentally. A float tank is ideal, as is yoga, massage, meditation – anything where the technology is off, their body is recuperating and you’re forcing them into a little bit of silence so they can process what they’re doing and take their mind off anything to do with football.

“We’re trying to educate our guys about the benefits of that. I like that concept of forced recovery for sure.”

Burgess, who communicates with Unai Emery every day both in person and via Whatsapp, also revealed he’s looking to learn Spanish so that he can better communicate with the new coaching staff.

“I want to learn Spanish, because I’m in a Spanish environment at the moment,” he explained.

“I’ve started – Spanish with an Australian accent should be interesting.”

For more on the Player Performance Centre and the work being done by both Burgess and O’Driscoll, make sure you check out Tim Stillman’s excellent write-up of a recent tour of the facilities that we at Arseblog News were invited to join.

And if podcasts are your thing, Burgess’ full interview with Mike Robertson is a great listen.

No massage selfies for you Bellerin!

About time. He’s spot on about shutting out the noise.

Always interesting hearing about behind the scenes stuff, especially to do with player recovery/performance.

There’d certainly be a benefit from not being exposed to the toxic nature of social media during recovery as well. Though I can’t imagine why a pro would want to scroll through IG while getting a massage anyway.

And if things don’t work out with Arsenal, he’d always be welcome back at Port Adelaide!

I’m guessing he wouldn’t be happy with the way our season has ended angry ?

Takes up too long after a match, looking at the Arseblog match report, their ratings on Arseblog, trying to ignore the comments from the thumbs down specialists.

Get them away from it.

I hope Mustafi is not reading arseblog.
We’re butchering this bloke over here.

I used to follow all the players accounts but they’re so sanitised and closely monitored I stopped.

Win a game – “good 3 points today! Great performance from the team!”
Lose a game – “disappointed with the result today, we’ll work harder and improve for the next match”
The rest of the time – “check out my new signature Nike boots!”

Sure most of them isn’t even the player posting put whoever they’ve hired to run their social media. I’d love them to actually say what they really think instead of the inoffensive bland bollocks it usually is

If you want to see a player being genuine with their interactions with fans, have a look at Hector’s.

That will inform you on exactly why many are sanitised now.

Does anyone know what Shad Forsythe’s role is at the club now?

He looks after the phones when the players are in recovery.

He’s probably in the Shadows.

You reckon his career’s gone off a Cliff?

He’s No2 to Darren Burgess

It’s about time to take responsibilities……
Come on social media only when it matters…..
social media is acidic……
Focus on ur career…..

Listening to criticism is an opportunity to lose focus

Quite the contrary, listening to criticism is one of the greatest ways to improve, but the criticism has to be insightful, which 99% of what is said on social media is not.

A float tank is ideal, as is yoga, massage, meditation

The last one has some evidence in favour, in the long run

Get rid of the Herbalife quack now

Is there evidence of negative effect?

Evidence about what exactly? That you relax and feel better?

Seriously, there is no evidence that massaging has any effect at all. You sound like a conspiracy nut

It’s really useful how you’ve augmented your comment with links to this evidence, to help others reach your enlightened state

It’s a mental and psychological one, not a physical one.

Need to introduce the concept of forced defending!

Tie Bellerin to the goal post, so he wouldn’t dart forward leaving behind a gaping hole.

This is a subject I have wondered about for a few years. The University of Kentucky training staff bans music in the training facility. As a long time yogi I can’t imagine looking at your phone during your practice. The yoga doesn’t start until the mind is clear 18 months or so I started lifting again. Almost everyone else is plugged in to their iPhone listening on buds. That seems so distracting to me. Between lifts I focus on my recovery not music My theory is you should focus on your recovery and motivate yourself internally not with outside stimulation.… Read more »

I just realised Aubameyang is on 180K per week, correct me if wrong. That’s more than 750K pounds a month or 9 million pounds a year. For what? Please someone tell me how this guy can be worth this sort of money. Punters in the U K are lucky to get more than 50k a year. Add in Ozil, on 350k! Surely not?
Thanks srsene

They should take your phone away.

I don’t know about banning phones but we need better communication when defending. We look very mechanical trying to enforce our zonal defense and high line. Other better teams know this and exploit it. Case in point, Chelsea who had Kante used as a spoiler running in and through our backline. There was no one aware or able to call out for cover to the Cbacks. This whole 5 captains in the team is beyond my ability to understand. It simply means there is room to hide. Nor is Ozil the sort of inspiration you want as a captain. His… Read more »