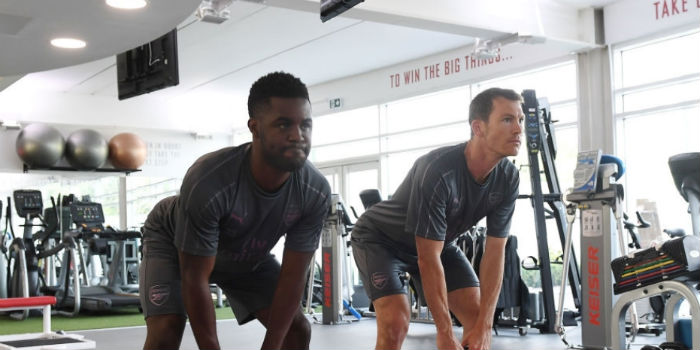 According to Sky Italia, newly-promoted Frosinone want to lure Joel Campbell to Serie A and could complete a deal very soon.

Unai Emery has confirmed the Costa Rica international is surplus to requirements at the Emirates and the club are willing to sell him before the second transfer window of the summer closes on 31 August.

The attacking midfielder, who is out of contract next summer, has already been linked with Galatasaray this summer.

Campbell has led a nomadic footballing lifestyle since signing for Arsenal way back in 2011. He’s had loan spells with Lorient in France, Real Betis (twice) and Villarreal in Spain, Olympiacos and Sporting Lisbon.

Joel currently has 18 days to ‘get out while he can’.

Another player i.d like us to keep and make use of. Surely he is a better bet than Nelson at this stage. Seems made for the high intensity game we keep hearing about

This is how we lost Gnabry. People obsessing over the Ox (ox wasn’t half as good a winger as Theo by the way).

Didn’t you know you can’t say anything positive about Theo?

We lost Gnabry because he refused to sign a new contract. Wenger tried to persuade him but he decided to leave

He’s a hard worker but, a bit like Jenkinson, has actually gone backwards in recent years. None of his loan clubs have wanted to do permanent deals for him, which says enough. A guy struggling to get in Betis’ team (and before that, Sporting’s) is not “a better bet than Nelson at this stage”.

Kwame Ampadu Down
Reply to  bystander

100% agree bystander. Arsene wouldn’t pick him, Emery doesn’t want him, almost all of his loan spells weren’t very good (none of them impressed enough to sign him permanently) & we’re struggling to find a buyer again…and yet there are still some who insist we should keep him ?
Always had time for him as his workrate was fantastic but truth be told Arsenal was a step too far for him. Good luck to him anyway.

indiegooner
Reply to  Kwame Ampadu Down

It seems Dick Law was the only person impressed by him.

Well, he very nearly beat Dick at hide and seek. That’s probably why.

Has there ever been another Arsenal journeyman like Joel Campbell?

Campbell should try a career in MLS. If he performs, he can get a decent salary.

Same thought here, he’s a hard worker but the manager is in charge.

Totally better than Nelson and for a team without wingers i see no sense in letting him go. Could have let him go on a free in summer while others like Nelson learn the game some more. All the best Joel hope those injuries that stopped your last 2 loans go away and you can perform to your best, but not against Arsenal

Never quite made it, though a few good matches.

Get some money for him while we can.

I don’t know why smaller PL clubs aren’t taking a chance on him though. Knows the country and even in arsenal teams, he gave a decent account of himself. Surely someone like Burnley with all the defending they do(which requires subs) or Huddersfield could’ve used him? I’m thinking they wouldve offered better wages than an Italian club? Maybe because he’s from Costa Rica, there aren’t very many of his friends/connections at other English clubs. I’m only implying that he gets less visibility or mentions than a player with plenty of mates in the PL would.

A Different George
Reply to  locksley444

He was never quite good enough for us, but four years ago, he was wonderful in the World Cup. In Russia, he was peripheral as a substitute, but the one time he started, I thought he was man of the match. I hope he does well in Italy, or somewhere else, and ends up with a good professional career.

Imaginary qualities bestowed upon him.

Only thing good about him is he is content sitting out on the bench for large spells.

We can get better players.

And people wanted to get rid of Granit or Mustafi…go figure.

People wanted to get rid of mustafi cos he has been poor for us. There, I figured it out for you ! You’re welcome.

That’s because Granit and Mustafi aren’t very good at football.

It’s the only league he hasn’t tried.

What are the odds on it being a loan only for us to realise he’s off for free as well as Rambo and Welbeck and we only have 15 M to replace them?

Eh? Thought he was originally a striker capable of playing on the wings?

Wenger and Law spent comparatively minimal for him so theoretically it should not have been this difficult to sell him. Wages of course the issue but ‘nomadic lifestyle’ and inability to really perform have become the problem.

Decent player but we need better and Nelson is showing great promise.

As thought, Italy should have teams with a need for Campbell. Hope he gets the move. Any opportunity for him will be great at this stage. Still has a lot of potential left.

Feel like he should still get into a better team than Frosinone though.

Hardest player to get rid of is Jekinson.

The same people bigging up Elneny saw some imaginary excellence in this fellow.

I get the whole Arsenal fan boy thing but objectively, he was so out of depth.

Crosses whipped into the box blindly were lauded by some pro-engelund pundits as brilliant and certain fans started seeing imaginary qualities.

Don’t even seem to have the championship interested for him.

The only good thing is we did not pay very much for him.

in memory of the skill, vision, touch and footballing mind of the one called Joel Campbell.
https://youtu.be/KqwE__nReJo

You look at his youtubes and you would think he’s the best thing since sliced bread. When he actually isn’t. Football is weird like that.

We’re going to see a lot of young forwards play for us this year. Welbeck is the only senior squad forward left.

I still don’t understand how this guy can’t get into a top team. Is it because he doesn’t have the physical potential to play week in week out?
Technically he is one of the best players I have seen. He still is technically superior to many of our current squad members. Gutted for this guy. I really love the way he plays football.

Kwame Ampadu Down
Reply to  ramgooner

‘Technically he is one of the best players I have seen.’

Wow. That is seriously bringing exaggeration to new heights.

There are YouTube videos that make Andre Santos look good, so it’s not the best barometer

You should actually watch a match then. He is even better than the one instant piece of skill or goal. I recall my first memory of him was against Spain (then world champions) and nobody had been able to beat them or even score 2 goals against them and up stepped Campbell at 19yrs to burst Spains bag from outside the box. For Arsenal he was brilliant when he got to start. Hasta Luego hombre.