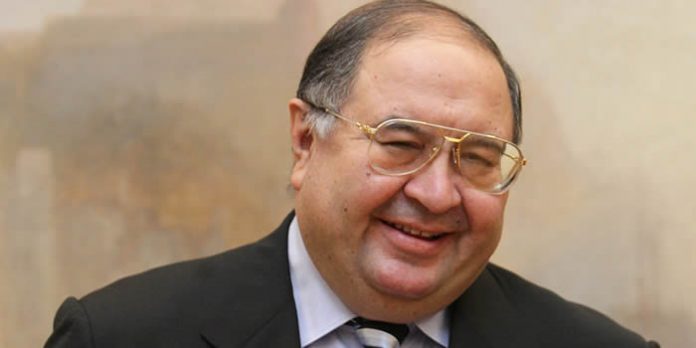 Back in August 2016, Arseblog News reported – based on info from a solid source – that Alisher Usmanov was thinking about joining Farhad Moshiri in investing in Everton.

Usmanov was quick to shoot down the story at the time but appears to have changed his tune.

Having agreed to sell his stake in the Gunners to majority shareholder Stan Kroenke, it appears the Uzbek-born businessman is indeed interested in helping the Toffees.

“We are friends with Farhad Moshiri,” he told Bloomberg. “If he needs the support, I am happy to help.

“Should there be a proposal or a possibility to invest in them with good potential returns, I would consider the deal.”

Despite links with AC Milan, Anderlecht and AS Roma, you can’t help but think that Everton has been Usmanov’s fallback option for quite some time.

So…how did we get here? Here’s a speedy recap.

Usmanov and Moshiri’s company Red & White Holdings first invested in Arsenal back in 2007 when they bought the stake of former CEO David Dein. They went head-to-head with Kroenke, who’d also invested in the club on Dein’s advice, in an attempt to wrestle control at the Emirates. Red & White quickly accelerating their investment to just shy of 30% by 2011.

In April 2011, Kroenke won the battle that would eventually win the war. The American consolidated his credentials as the club’s majority shareholder by securing 66.64% of the club following the purchase of shares from Nina Bracewell-Smith and Danny Fiszman. He refused to allow Usmanov and Moshiri to take positions on the board, a decision that ultimately frustrated the duo.

The latter was the first to buckle, selling his stake in Arsenal to Usmanov and then reinvesting in Everton in February 2016. Usmanov made a desperate attempt to buy all of Kroenke’s shares in May 2017 – generally viewed as a last throw of the dice – but was again rebuffed.

Last week, it was confirmed that Kroenke had agreed to buy Usmanov’s 30.04% stake and that he’ll be taking the club into private hands. Usmanov, having made around £400 million on his initial investment in the Gunners, is now free to take his cash elsewhere.

Everton seems like a logical choice. In fact, one of his companies USM, has already agreed a deal to sponsor the Merseyside club’s training ground. His close ties with Moshiri were even the subject of a BBC investigation.

A cash-rich oligarch with a grudge against us…just what we need in the ever competitive Premier League.

Inevitable. If he invests a lot of his money into Everton then we have lost out, Stan will never do that. I can see Everton stepping up over the next few seasons if he does invest.

We didn’t lose out on anything. Usmanov isn’t an Arsenal fan trust me.

yeah and Stan is a HUGE Arsenal fan…

Neither of them are Arsenal fans. That’s the point

I don’t think anyone believes either are Arsenal fan’s but given the choice between a non-Arsenal fan for whom won’t invest in the club and a non-Arsenal fan that will the decision is quite simple. I for one am not 100% convinced that Stan won’t invest. Maybe not as much as we’d like but he does now stand to lose a lot of money if he doesn’t maintain the club. And as for why hasn’t he invested heavily earlier? Simple, why raise the value of the shares you don’t own but want to own when you can do the bare… Read more »

Don’t think he needs to invest, the cash will keep flowing courtesy of TV money. Of course relegation struggles would be bad for business, but top 8 would be enough. There is no guarantee with big investment and you could easily waste tens or hundreds of millions, especially in such a competitive league as the PL.

Despite record revenues our transfer net spend has been dropping, I don’t think by accident.

Without match day revenue Arsenal don’t make money, so that needs to be maintained otherwise we’ll be on a downward spiral, so significant investment will always need to be made. Last seasons no shows would have been a real eye opener for Kroenke, fans not turning up is no longer unfeasible. Also professional investors invest to make money not lose it. He knows the value of the club is linked to how competitive it is and thats where the moneys made, raising the value not pulling out the profits year by year. A perfect example of this is our friend… Read more »

Well he had a box and attended matches regularly unlike Kroenke.

Ha. Voted down for stating an obvious fact, have I missed something?
They’re both investors who’s only goal is profit and that is the sum total of their interest in the arsenal. Sadly, this is the ownership model for successful clubs.

I have a hypothesis. I think Stan has been apprehensive to spend big just like Usmanov never spent big for us because neither would be gaining 100% returns when putting in 100% of their own money when they only owned 70-30% respectively. I think now he owns 100% and its in his interest for the club to do better aka better adidas deal, better world wide fan base and champs money i think he can speculate to accumulate a bit more.

How could Usmanov spend for us. He wasn’t in a position to do so. Made an offer once which was rejected out of hand

If this happens we are going to struggle to get in the Europa League..

He won’t care…. With the amount of money in the PL, we don’t need European football to be profitable, it’s just a bonus.
Kroenke won’t care if the stadium is full of tourists, providing it’s full.
No European football? He’ll just trim the squad and the wage bill with it.

Yes, because you can both see and predict the future.

Nina Bracewell-Smith and Danny Fiszman…. hope you are happy eh?

You didnt mention the most obvious name: David Dein. He put us here, try to realise that.

No he didn’t. He is an Arsenal man through and through. Yes he admitted his mistake for bringing in Kroenke but he sold his shares to Usmanov and it was only the fact that Lady B S sold her shares to Kroenke is why we are in this invidious position

To be fair, between those 2 and David Dein they helped to create an ugly situation for the club, but I know out of the 3 of them that I would like to still be involved with us.

You can be sure that Fiszman, had it not been for ailing health, would have kept hold of his significant shareholding. Very hard to criticise the decision of a dying man who’d done so much for the club and was genuinely looking out for its long-term future.

A Different George
Reply to  @AAllenSport

Who is voting this down?

Pedant
Reply to  A Different George

https://www.independent.co.uk/sport/football/premier-league/fiszman-was-real-reason-arsenal-did-so-well-says-adams-2319483.html if anyone doesn’t understand what he did.

You mean we should listen to the bitter Tony Adams who sadly constantly snipes at the club.

George
Reply to  A Different George

The people who realise that Fiszman made a huge mistake by sacking Dein who had a great working relationship with Wenger.

Shockedy-doo-daa who would have thought Alisher “I love Arsenal and my shareholding is for the long term” Usmanov would ever invest in another English club given his background as a dyed-in-the-wool Gooner since he was er since 5 minutes before he bought the shares in Arsenal in the first place? It was one thing to be taken for granted as a fan back in teh day when all that meant was standing on broken, piss-sodden concrete in the freezing cold and complaining about the pies being shit – at least it was affordable to be treated like an idiot. Now… Read more »

I wish he does. Just to see how good him and his pal can do or how poorly. As for Everton becoming another big club with massive amounts, honestly I care less. I hated the new model ever since Roman came on the scene. The only positive is now I always look forward to facing City, united, Liverpool, Chelsea and beating spurs. Wouldn’t mind adding an Everton there too. There’s a time when I looked at the fixture and all I looked out for was when do we face united? And Liverpool to a lesser extent. And just for comedy… Read more »

Take your nasty Russian money and fuck off. do these people think we actually give a shit about them? I for one never wanted this dirty bastard to wrestle control of our club, I actually see him as the greater of two evils. So for how many years people having be crying about David Dein when in fact he brought both these arseholes to our club and ultimately lead to us being owned by an American who really couldn’t give two shits about Arsenal. Of course his millions and millions will soften the blow for him.

If Usmaniv is a thug and friends with the Everton owner, what does that make them together?

My toy is better than your toy could become quite damaging for us in the league as I don’t see Stan rising to uzmanov’s challenge.

What, exactly is Us’s challenge?

Your comment is rank speculation based on meedja-fed BS, supposition and wishful thinking.

Alotta faith you have in your supposed club. The players would all be sooo happy to know supporters like you are out there and backing them to succeed. And picking Everton to eclipse Arsenal in the Premier league. Well done. No, really; top top work there, laddie.

You have a perceived grudge against Silent Stan (of the creepy mustachio) because you blindly believe the BS you are peddled by the so-called Arsenal supporters who just want to moan about everything. And you are judging a man for what he allegedly hasn’t done. After the club sunk over 70M pounds into new signings this summer, and lord knows how much in overhauling an antiquated club structure.

Use your own judgment, I suggest.

My conclusion is that Usmanov is out to buy a premiership club. Any one.

Absolutely not. Why did he stay so long as a major shareholder so long. He wanted this club but has lost patience as he would never get a place on the board or have any influence

No, no but he “wuves” Arsenal. He really does. Or at least, kind of does, or did. Maybe he loves the club, not just the financial part. Its surely not the “ownership” of a fancy, famous bauble that attracts the Us, like a over fed horsefly. Its the club! The history! The players! And everyone knows that Arsenal was boyhood … er, Everton!…Yes, Everton!! Everton, the blues from that one place in England. Ya know, by the sea. Evertons was his boyhood favorite club, whilst growing up poor and corrupt in the former Soviet wherevers. And he’s really been an… Read more »

So David Dein sold his shares to Usmanov and advised Kroenke to buy most of what was left. Is he by any chance called ‘Littlefinger’ among friends?

David Dein did not advise Kroenke. He sold his shares to Usmanov as he wanted him to take over the club but Lady B S put a stop to that.

I was referring to what was written on the article above.

I’ll always be an arsenal fan but the club is no longer the club I fell in love with!! 4th generation arsenal fan Londoner born and bred but Kroenke is without doubt the worst thing to happen to arsenal in a very long time if not ever!! The individuals who sold out to him have a lot to answer for.
They just didn’t do there homework or just didn’t care !!