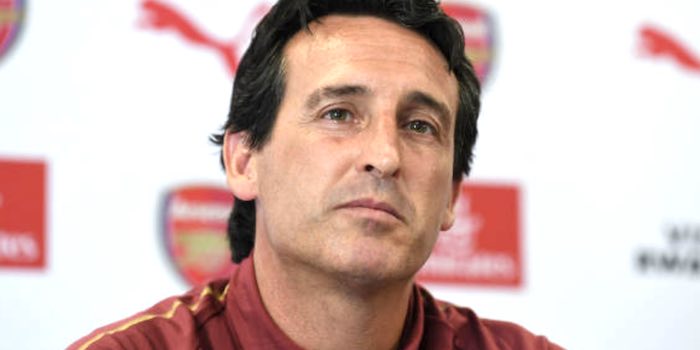 Unai Emery has confirmed that David Ospina, Carl Jenkinson and Joel Campbell could leave the club before the month’s second transfer window closes on 31 August.

Premier League clubs had to have all their incoming business done by 5pm yesterday but they can sell and loan players to clubs in the English Football League and across the globe for another three weeks.

David Ospina, a late returnee from the World Cup, is surplus to requirements and is understood to be in talks with Turkish side Besiktas. Carl Jenkinson will likely drop down a division, while Joel Campbell’s weirdly long seven-year stint at the club will end permanently one way or another.

Speaking ahead of Sunday’s match with Manchester City, Emery revealed: “Yesterday the window closed here in the Premier League. Today, we had a meeting with the players to close all the possibilities to leave or come with more players.

“We only have three players: Carl Jenkinson, David Ospina and Joel Campbell, with the possibility to leave. But the other players are with us and we are going to work in the Emirates the day before the match with all the players.

He added: “Only two young players are going today, to play tomorrow with the under-23s against Manchester City away.

“They are Emile Smith Rowe and Eddie Nketiah. The others, they are with us and tomorrow we decide the group for going to the hotel and also the first 11 and the first 18 players.”

There had been rumours suggesting Mohamed Elneny and Danny Welbeck could leave the club but those haven’t come to anything. Danny will be a free agent at the end of the season but as things stand the club seem happy to risk him leaving for nothing.

An excellent hardworking midfielder who is more than a useful squad player.

Not he is not Messi therefore doesn’t deserve to play football even if it’s as a substitute or cover for injuries.

Kwame Ampadu Down
Reply to  Geezy

More than a stretch. Extremism rules these days, both positive & negative.

We need a stronger and commanding midfielder and he is doesn’t have any of these qualities. Time to Get rid of average players !!!

I read the comment before the poster’s name and almost expected to see afan as the poster. Mo is by far the best squad player we have.

AMN is the best squad player.

BUT no need to sell for now.

Elneny’s value is in his reliability, which is an extremely good quality for certain last stretches of any important game. Unfortunately, that also makes him a bit predictable to pressing midfields, and so he is not likely able to deal with a few of the more talented midfields we will have to deal with. Even though he’s mildly above average, just what he provides definitely is something this squad will need to replace if he leaves–should not be for sale. AMN is still raw as a carrot, and squad players need to be reliable first and foremost (i.e. Giroud sub/start).… Read more »

Great to see Danny Welbeck staying. He has a point to prove now when he is given his chances.

Agreed, I think he’ll be great for a pressing system. Apart from his finishing and his injury record, he’s only a plus for the club.

Apart from the finishing….

no its not, he has had plenty of time to prove himself, but he hasn,t, he is crap, get rid of him

Yes he has and that’s why staying

I’m happy Nelson stayed and is with the 1st team squad.

Pretty much confirms Nelson will be in the squad tomorrow. Good.

Welbeck is too good to not be playing PL football every week. But isn’t quite good enough to be doing that with us. If he’s ok with playing less often, or other clubs aren’t convinced of his value, that’s not the worst problem for us to have. He offers a different way for us to play. Worth being able to throw on at the end of the game. I’d expect him to leave in January because I cannot see him playing much at all. Elneny, similarly, is not a starting player but offers real variety in midfield. He’s quite limited… Read more »

Good points…and Welbeck all to rarely, makes a difference….

I thumbs up you..but i disagree about campbell..i like him

Interesting that Xhaka was the best and most accurate forward passing player in the Premiership last season. Now he can play in his true position as a deep lying midfielder her will see the best of him.

A Different George
Reply to  Ourchildrensworld

I generally agreed with the assessment of Elneny, except that near the end of last season, he played a much more forward-looking style and looked quite impressive. I was surprised and I think he has the ability to be a better player than he has usually shown up to now. I’m not saying he is a player you build around, but he is more valuable than the stereotypical “squad player.”

I don’t remember Szczesny asking to leave. That was arguably Wenger’s biggest mistake he made at selling players

Along with giving jenkinson a 20 year contract

Campbell for certain is not in that category. If we were raving about the Ox and Campbell came and totally made him redundant as well as having people say they would not drop him when Ozil returned from injury, then you know you had a player on your hands. Reiss Nelson is nowhere near to him and Iwobi still not as productive in the final third as he is/was. Campbell is experienced makes the right decisions in the final third plays defense and honestly would fit great in Emery’s team set up. Sad but so it go sometimes…

Kwame Ampadu Down
Reply to  Bois

And yet Arsene never picked him, emery doesn’t want him, he’s had a succession of failed loans & nobody seems to want to buy him…….

Bois
Reply to  Kwame Ampadu Down

Actually his loan moves were not failed except the last 2 in which he was injured but otherwise did relatively well. He was starting most times when fit. Even against teams like Real he still showed his strength. But more importantly he he showed up and never hid for Arsenal. The problem was probably he wanted more playing time which he deserved over players who were on higher wages and not as consistent. Cannot blame a player like that. Unlike the many who get a free pass for inconsistent ever so often show of skill. Almost like Giroud and many… Read more »

Campbell is definitely not in that category. This is a guy who, when we were raving for ‘The Ox’ to play, kept him out of the team. When Ozil was out injured, he was starting and there was a change of fortune for us, that some people were wondering if he should even be placed on the bench on Ozil’s return. He is better than Reiss Nelson and Iwobi currently. Better defensively and more experienced with end product in the final third.

I have to say I’m excited, will take a draw from City but AUB, LACA, MIKI and Ozil might have a different idea about all that! Torriera to start and be an animal.

I hope we make the right choices and get good money for the surplus players up for sale. I would have loved if Campbell could stay and given a chance to prove himself, but it seems the manager has already made is decision. ?

Welbeck made the England squad despite being 2nd or third choice last season. I think he is a valuable squad player and will certainly contribute goals and is well-suited to a pressing game. As for the 3, i can see Campbell and Jenkinson being released and allowed to go somewhere for free. I don’t think it is an inability of the club to move players on for good money, but the form, quality, and length of contracts that have hampered our potential earnings in moving these players on.

I think Jenks will have to be loaned out, he earns too much to leave voluntarily.

Welbeck still has function. We don’t have his height and power otherwise.

Welbeck and Elneny are on the sales list if price is good enough.

Jenko, Ospina, Campbell are must sell if possible.

When will he confirm that the previous press conference desk has left the club? I want answers!

Jenko will be crying into his Arsenal bedspread after hearing that today. Feel for the lad but he’s lived the dream and always has that goal at Norwich! Hope he goes on and has a good career elsewhere.

If Arsenal fan is ANY criteria for the squad, may as well call me.

And not even good enough to attract any offers. Hardly likely to move now that UK market is shut.

lets hope we can get rid of them

Jenkinson is probably offered for free. NO takers.

Not long since you included Jenks in a list of players for who we could get an average of 10m this summer….a list that included Akpom (2m) & Lucas (4m)….briilliant insight.

Hold out for the testimonial Joel!

Sounds about right. Jenkinson nobody wants. Unlikely to find a buyer in the championship even (and too late now anyway), let alone in europe. How some people (the same to imagine Elneny as more than he is) could deem Carl world class bc he ‘whipped crosses in’ (blindly) is beyond me. But outlay was nothing so we don’t lose much on him. Even the Chinese don’t want him. Campbell again for all the moaning by some people about Dick Law was a hedge buy on a future that did not materialise in part bc we did not give him much… Read more »

a) Saying anyone ever called Jenks world class is just lying.
b) it’s not too late to sell to the championship. Did you even read the article?

Did you even read what I wrote. Comprehension problem somewhat?

Championship doesn’t even want him.

Did I not comprehend ‘Too late now anyway’?

SharpasFc
Reply to  Kwame Ampadu Down

I was kinda hoping I would see Mustafi’s name.