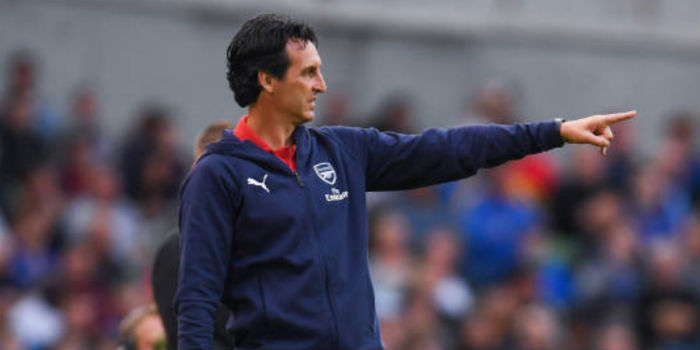 Arsenal rounded off their pre-season friendly schedule with a 2-0 win over Lazio in Stockholm last night.

The victory, courtesy of goals from Reiss Nelson and Pierre-Emerick Aubameyang, included ‘debuts’ for Stephan Lichtsteiner and Lucas Torreira, as well as minutes for the returning Granit Xhaka. It was a far from a fluid performance by the Gunners, however, that’s perhaps unsurprising given the tinkering that continues to take place on the training pitch.

After the match, Unai Emery explained that some of his players still aren’t at their physical peak and that he’s not yet committed to one particular formation.

“We want to give them these minutes for fitness and also so that they’re working together and tactically can start to work with us.

“In the first week it’s clear that they’re not at their best physically, but we want to continue working with them and if they are OK physically, mentally and in their performances, and better also than other players who were working with us, we could choose them in the first XI.”

He went on: “Each match is giving us information to continue to improve and continue to develop.

“Today we played with 4-4-2, to try this system and tweak our mentality, style and ideas, but for me in the first half the possession with the ball and control with the ball wasn’t as good as I wanted.

“Today we tried in the second half and second half to choose the best system with the best players and best ideas, but I’m happy with this performance because they are working very well and improving also.”

Emery now has six days at London Colney to finalise his preparations for Sunday’s opening game of the season against Manchester City. As things stand it looks as though he’ll not have additional recruits to play with, so at this point it’s really about honing tactics and upping player fitness levels.

“My focus is on the first match and preparing, and not for the window and the possibility to sign another player,” he noted.

“Maybe we need some players to leave because we have lots in the squad, but at the moment, my one focus is on our work.”

Why do all the quotes from Unai Emery remind me of that bit in Life of Brian where John Cleese goes, “Those people called Romanes, they go the house?”

‘Far from fluid’ seems a little harsh. We dominated much of the match, kept a clean sheet and deserved our win.
I thought Iwobi and Mkhitarian were the standout performances, maybe helped by better conditioning than the newly returned players.

You can now begin to see the difference between a youthful management( never satisfied) and an ancient one(everything is OK).

From a fans perspective I’m sure you may have been , but it’s clear that Emery had some ideas amen olans that he wasn’t seeing, regardless of us dominating etc. It’s preseason, and there seen things he wants to see.

It’s surprising how UNAIanimosly every Jose of whose is PEPing sp**s to finish out of top 4 this season!
Klopp is ticking out for them..

No. And… what?
Actually… just no

I gave you the charity thumbs up. I know you meant well.

Well, i acknowledge we are just learning the Emery way….which i like by the way, and so things will get better with more practice, but our backline just gives me jitters at the moment, they just look nervous and with the season starting in a few days, if the kind lapses i am seeing are not ironed out very quickly, high scoring teams like city and liverpool will just slaughter us

You mean the season we finished 2nd ?

I still find it amazing that people are somehow expecting rapid changes with just 3-4 weeks of tinkering by Unai, many of which weren’t even available for the whole preseason.

I think fans would be better off considering this whole season as a preseason for Emery.

One of the coolest things about the goal Nelson scored is it came from the kind of move Chelsea pulled off a couple of times against us. Playing keep-ball at the back against a high press, then springing forward with a quick vertical counter where every pass hurts the opposition instead of going sideways. It’s the trademark move Sarri perfected with Napoli last season when they scored some of the best team goals around. And we’re already taking those lessons on board without a full-strength XI. Plenty to look forward to if we give Emery’s team room to grow this… Read more »

Came from Iwobi being able to push and instigate from left side.

That’s why a Vida- buy would make so much sense.

Does that mean 4-3-3?
Mhkitaryan, Elneny, Gwen all start with Auba from left, and Ozil from right? Anyone think any different?

There is no best system.

He is saying he will rotate system as and when and within a game if need be.

The formation is moot. It can and should change within a game to suit circumstance and the strengths of certain players.

Some of our players look like they’ve been on the gas… Elneny and Cech look massive.

If Torreira, Welbeck and Monreal were ready? I think they’d certainly start, and I’d be surprised if Rambo was still here.
Aubameyang isn’t really a winger, and Emery seems to have quite rightly ruled out 4-4-2 as a way of regularly setting up.
We’ll likely have less of the ball against City, and I’d rather have Aubameyang sat on the halfway line than Lacazette.

Im happy for Perez, Welbeck, Ospina Campbell and Jenkinson to go. I am happy for Welbeck and Perez to stay. If it means we can get a special winger, maybe Dembele on loan i will take it.
To face city –
Cech
Bell Sok Must Mon
Tor Xha
Miki Ö Aub
Laca
What do you guys think?

You’re happy for Welbeck to go or to stay?

Monreal has a knock.

He is still clearly learning about the team and individuals. And that is the right thing to do. Cycling through various formations is key plus exploring relationships between players. I thought for example Iwobi and AMN partnered up very effectively on the left. The critical element though is whilst none of these formations, high press or highline are anything new (Wenger has done the same) it seems Emery is : 1) More willing to perfect them from sideline and pay attention to the details of execution. 2) More willing to use the advantages of the various formations in changing them… Read more »

I wonder with the left back issues if he’s considering a 3-5-2. AMN left wingback. But that could get scary with 3 slower CB’s getting run at by Sane and Mahrez and Aguero roaming around, though we’d really mostly by 5-3-2, probably with a Ozil one of the 2. But it sounds like his ‘comfort zone ‘ is 4-2-3-1. Thinking a little defensively, AMN left back, Iwobi left wing. Pick 2 CB’s of your choice. I’d prefer 1 fast one, 1 grizzled cynical one. Bellerin RF, Mkhi RW Ozil or Ramsey in #10 depending on how worried he is about… Read more »