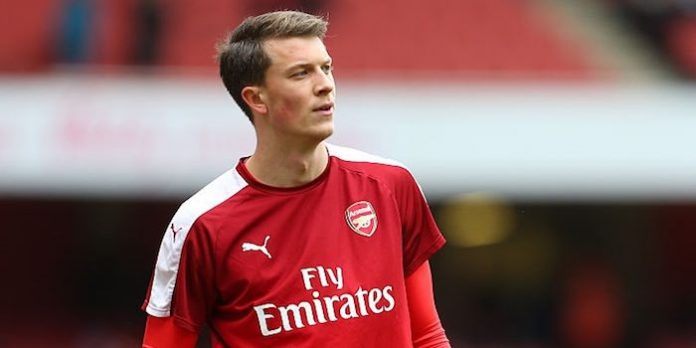 Matt Macey is certainly aware that breaking into the first-team at a major club as a goalkeeper isn’t easy.

Macey is 23 years old and has been an Arsenal player for almost five years yet he has just two competitive senior appearances for the club to his name.

At times last season it appeared as if Macey could soon step up to become the club’s third-choice goalkeeper but the arrival of Bernd Leno and the return from loan of Emiliano Martinez has pushed him further down the pecking order.

Although Macey started pre-season by training with the first-team, he wasn’t involved in any of the preparation fixtures under Unai Emery and has instead been sent out on a season-long loan to Plymouth Argyle in League One.

It seems that Macey has already established himself as Plymouth’s first-choice goalkeeper as he was selected to start against Walsall yesterday in the opening game of the season.

The game didn’t go to plan for Plymouth, who were beaten 2-1, but Macey still emerged with some credit as he made some impressive stops and also saved a penalty, although Walsall scored from the rebound.

Although Macey retains the desire to establish himself at Arsenal, for now he will be best served by focusing purely on Plymouth as he seeks to get consistency in his game and develop further.

He could return to Arsenal next summer and find himself in a better situation, with there being a chance that some or all of Petr Cech, Martinez and David Ospina may have left by that point.

Macey has improved considerably during his time at Arsenal and showed some encouraging signs during his first-team appearances last season but for now it is time for him to, temporarily, forget about the Gunners and focus on his own development.

With Virginia gone, his chances have re opened again

Goalkeeper news is pretty quiet, I’d assume Ospina will leave but Martinez is the one to watch this season- he needs games before he becomes Stuart Taylor

I hope that Macey retains his place in the Plymouth 1st team because he really has to if he harbours any realistic hope of making the 1st team at Arsenal.

Accrington Stanley? Who are they?

Well, 2 of us got that reference, mate. Showing our age, maybe!? Ha.

It’s really messed up how many senior goalkeepers we have! Why not sell most of them, in this current market surely we could get a few million for them all including Ospina. They’re all 23-25 and are not gonna make. Keepers can have a longer career, yes, but the good ones make it early a la Courtois, de Gea, Kepa, Pick Ford, Donnaruma etc. etc. Cech, Leno as 1st team goalkeepers. Iliev then 3rd as 2 main goalkeepers because 2 main goalies are rarely injured at same time. Hein is only 16, hope he develops well to become a regular… Read more »

Why I Ospina is like the mosthated and unwanted GK in Arsenal? What actually has he done to deserve such treatment?