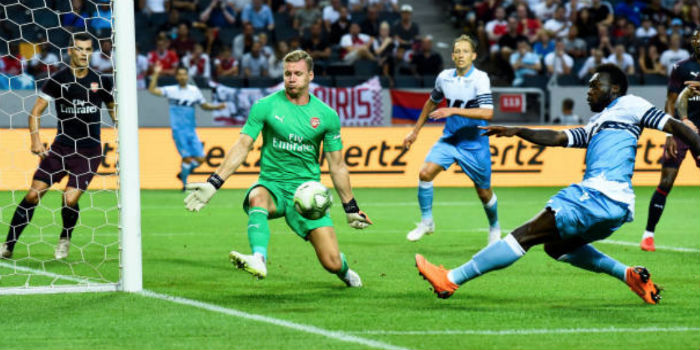 When it comes to who’ll start the new Premier League in goal for Arsenal, Unai Emery is keeping everybody guessing.

Petr Cech and Bernd Leno have shared the majority of the minutes in pre-season with the veteran excelling against Chelsea on Wednesday evening and the new signing keeping a clean sheet versus Lazio last night.

“The best for the team is to have the best goalkeeper with the best performances,” Emery said after last night’s win against the Italians.

“Every match we’ve had good performances from Petr Cech and Bernd Leno and also from Emi Martinez, and for that I am happy. I am on the lookout for who will start in the first XI.”

After the 2-0 win in Sweden, the 26-year-old German took stock of his performance and reflected on how he’s settled into life as a Gunner since arriving from Bayer Leverkusen in mid-June.

“I am satisfied [with the Lazio game], I think the team showed a good performance and the defence was very good as well,” he told Arsenal.com.

“We won the game but the most important thing was the performance and that was very good.

“I think we are very close to being at 100 per cent. It was exciting to be in Singapore, then on Wednesday we had a difficult game, and today again, but now we can relax a bit and on Tuesday we will focus on the game on Sunday and prepare for Man City.”

He added: “It’s very good, I’m so proud to be part of Arsenal. The team is very nice, the coaching is very good and it’s fun to be here.

“It’s like a family, we have big players, big personalities but I think the atmosphere is brilliant. I’m a little bit surprised [by how good it is], it’s very good for me to come to a team as a new player and the team make it very easy.”

Arsenal are still expected to sell at least one ‘first team’ keeper before the transfer window(s) close with David Ospina edging Emi Martinez as the most likely to depart. The Colombian should return to pre-season training this week to discuss his future.

Leno: It’s not the time for self-pity

Who would have thought it, competition for places has raised the players’ games

I’d vote for Petr to get first crack mostly because we’re up against two of the best teams in the country in the last decade. I think his know-how will be invaluable in these games and there’s already enough pressure on Bernd without him being judged on his performances in what will be a baptism of wildfire.

Surely? I’ve wanted a keeper to replace Cech but judging by his pre-season, he’s done so well. Also, playing Manchester city and Chelsea first means his experience and knowledge of the league may count.

Welcome Leno and continue to feel at home at Arsenal FC. We the club fans expect much from you, just put in your best and have fun doing that. Best wishes.

He’s not reading these messages himself Charles

I don’t want to jinx anything, but in all my Gooner years I don’t ever remember us having two established keepers of this quality! Our two strikers are probably the best since Bergkamp and Henry too. Yeah we had a young Adebayor and RVP at one point but, 1) they were not of the same collective standard 2) one was always injured and 3) they both turned out to be turds of the smelliest order.

Not giving you very generous odds on that one. True story though: my Arsenal-supporting mate got terrific odds when he put $11 on Leicester to win the PL at 3000-1 and they won it… nothing to do with this article but it’s a ripper story.

Especially with us beating Leicester home and away.:-(

Being the only team to do so,

Though I’m not bitter. Spurs finished 3rd in a 2 horse race so St least we’ve got that and the Leicester exception to the money rule.

Hope today players of Chelsea and Man City get lot of red cards, tired and injured for at least for 2 match days.

Red cards wouldn’t have any effect on the Premiership as it regarded as a friendly.

I think we’re fucked in the first game tbh

Given the season hasn’t started yet. How about enjoying some hope for a bit… before plunging into despair?

The way I see it lots of positives : Emery is correctly still testing out different set ups be they 4-2-2-2 or 4-1-2-1-2 or 4-3-3 or 4-2-3-1 or 4-1-2-3. He looks like he is trying as well to figure out relationships and who is good in which context. None of these formations are the high pressing or the high line are particularly new. Wenger has done it before. Aubameyang out left is a Wenger innovation and he rotated the midfield 3 (fidget spinner)in supporting players higher up or dropping to defense. The difference is : 1) The details. Emery is… Read more »

Personally I think its for Leno and Martinez to show they can displace Cech.

I think it’s very important for Leno to start. Paid 20+ million for him, it’s a new era. Need to set that tone that it’s his starting position to lose.

Cech has had his moment in the sun, and even he knows it.

I think Leno is a fantastic goalkeeper.

If Leno starts there is tremendous pressure on him to perform, it could lead to a point of Karis with no return. Cech should lead, its just far more logical.