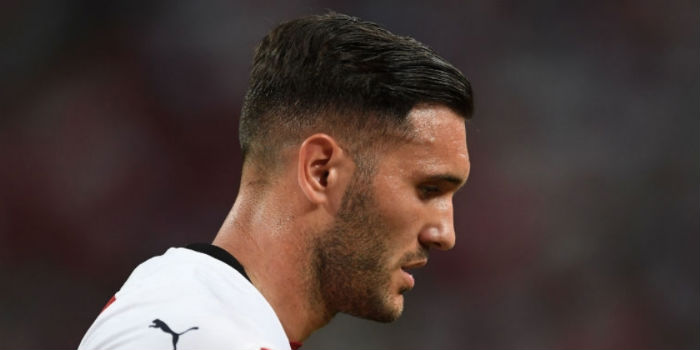 According to various sources, West Ham United are keen on signing Lucas Perez before the transfer window shuts for Premier League clubs on Wednesday afternoon.

The Spaniard has also been heavily linked with a move to Sporting Lisbon, although according to the Independent the striker is open to staying at Arsenal and fighting for his place.

Given the Gunners are eager to trim the fat from their squad it seems more likely that the 29-year-old will leave the Emirates than stay. It’s even suggested that we’ll take as little as £4.5 million for the player to suitors cover his significant wages.

Things haven’t really gone to plan for Lucas since he moved from Deportivo La Coruna for £17 million two summers ago. He moved to London hoping to win a place in the Spain squad, however, he found game time limited in his first season and soon pushed for a return to the Estadio Riazor.

His loan to Deportivo, which included a clause for a permanent move, quickly soured. Injuries and poor form took their toll and his boyhood club suffered a financially damaging relegation.

Unai Emery welcomed his compatriot back into the fold at London Colney in June and he went on to play minutes against Boreham Wood, Atletico Madrid and Paris Saint Germain. This week he’s been excluded from the squads that faced Chelsea and Lazio (another club he was linked with this summer), seemingly falling behind Eddie Nketiah who has provided back-up to Alex Lacazette and Pierre-Emerick Aubameyang.

Premier League clubs must complete their incoming transfer business by 5pm on Thursday. Sales to foreign suitors and clubs in the English Football League can take place until 31 August.

Emery: We’re enjoying each moment with the fans

What a swoop it was when we gazumped Everton for him. That was when I stopped complaining about other clubs cutting in on our transfer targets at the last second. Good times.

Feels a bit of a shame, he always seemed pretty handy when given the chance, but so did Joel Campbell. Neither got any love from Arsene, and to be fair neither have shone so brightly on loan moves to bring those decisions into major scrutiny.

I mean to say, as much as I questioned his wisdom at the time I don’t think Arsene ever maureened a player quite in the same way that Maureen did with Salah or De Bruyne.

The thing is Arsene was pretty clear when assessing a player’s quality. Right now I have been wondering if that is the quality we are missing. Arsene had the authority to decide what he wanted.. I don’t think Emery has got the same sort of a power. Been wondering if that could be a good or a bad thing?!

Ya gooner
Reply to  Yellow Ribbon

If the preson in question making those decisions is a great assessor of quality then it’s a good thing.

There might be a reason why Arsene only played them in worst case scenarios when everyone else was injured, also a reason why no one will pay more than 5m for either player. They played well the same way flamini played well his first 5 games, the same way Mustafi did his first couple of games. I am certain if they were actually given the chance they would have been exposed. What people liked about Perez was his work rate and directness, but mostly because it was something we lacked in that arsenal team. We have since bought Lacazette and… Read more »

A Different George
Reply to  Gooooooonnnnnnnnaaaaaaa

I know it is a cliche constantly repeated by people and newspapers who are wrong about almost everything, but it is really true that the quality required of players in the top clubs in England is astonishing. I don’t mean that someone who plays for Barca or Juve (or even Dortmund) can’t play for Chelsea or Liverpool, but many players who could make a decent career in the mid-upper levels of top leagues would be badly exposed playing regularly at the English top six. It is, ultimately, a question of who can pay the top wages.

It goes to show that very often managers know what they are talking about. Wenger didn’t fancy him, and we thought it was unfair after a few decent performances. In comes the new manager Emery – a clean slate – and still he is not picked. Shame, I thought he had some quality

Circumstances are very different though. Back then Wenger only had Giroud to pick from, and then later a Welbeck who, on his best has never been quite good enough, let alone the fact he was returning from months off from his second ACL injury. At that time, it was perfectly justified to demand more opportunities for Perez, especially as in the few times he’s played, he didn’t look too bad. We’re talking about the same Wenger who gave Theo a whole season as CF till even he decided he wasn’t up for it, and regularly gave Sanogo a chance up… Read more »

On a serious note, nobody wants Welbeck. Nobody despite him entering his final year. Looks like we’ll be stuck with him for another year minimum.

Speaking of which, I remember that time when AW extended the 5 british players’ contracts, and they were hailed as the “Arsenal core”, with supposed class and “loyal” enough to stay with the club and achieve successes.
only problem was: They were very mediocre!
Fast-forward years later, only Ramsey is here, and ironically refusing to renew contract!

Maxin In The Shade
Reply to  Twatsloch

But am I the only one who thinks that Perez could’ve actually been a decent player for us if he was given a few more chances? You play 16M, then let him sit on the bench and loan him out?

The few times I watched him, he seemed to do ok. What was it, 7 goals in 11 games – mostly as sub. He has a touch of class about him and a good finisher. Had he been given perhaps a consistent run he could’ve turned out to be value for money.

Faisal Narrage
Reply to  Maxin In The Shade

One could question whether he was good enough to play for us at the time, but I think it’s undeniable that, when fit and available, he was certainly a better option than Welbeck. And I don’t even mean a fit and playing Welbeck either, whom we could still debate who was better, but a Welbeck returning back from a long-term injury. That’s what Wenger did when he instantly put Welbeck back as no.2 striker, even though he was returning from injury, over Perez. No way was Perez THAT bad, surely? Even Sanogo got more opportunities as a striker than he… Read more »

I would like to see Lucas given a chance too but I think the problem is the young players are knocking on the door.

We’re just poor when it comes to selling our players, I mean, 4.5 mil !?
I’d rather keep him as a backup, this guy never really got a chance…

If he is going to Wham we better get a lot more than £4.5Mil

Quite right. I think £4.5Mil and a pound sounds good.

A bizarre Wenger signing. But bizarre because he was – and is – good – and we never used him properly.

Some of Wenger’s latter signings were just an example of burning money for no gain. But this guy had and still has, real ability but he was no sooner signed than rejected.

Whoever get’s him will get a good player at a bargain price.

I don’t believe he was a Wenger signing, hence why he never picked him.

But he was signed well before Mislintat and Sanhelli arrived – was he not ?

He was a statDNA signing.

Well, He actually have decent stats.
Even last season – in which people say he played poorly throughout- he has a high “chances created” count.