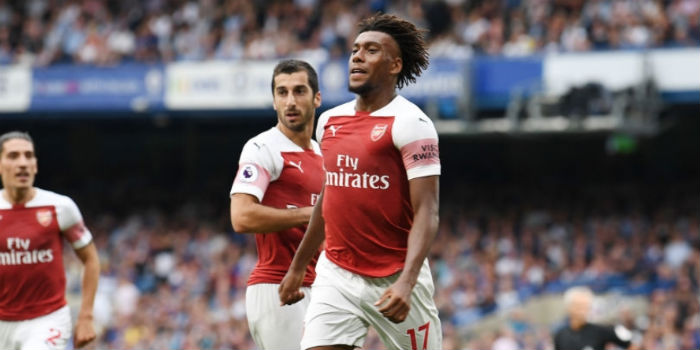 Alex Iwobi says Unai Emery’s new training sessions necessitate that he’s at the top of his game and he already thinks the hard work is paying dividends.

The Nigeria international was a surprise starter when the Gunners travelled to Chelsea last Saturday and he went on to help himself to a goal and an assist as he impressed in the 3-2 defeat.

Having grown up at Arsenal under Arsene Wenger, Iwobi might have found it difficult to swallow the myriad recent changes at London Colney, but he says he’s relishing the challenge.

“It’s exciting times to be fair,” Iwobi told Arsenal Player. “Everybody’s enjoying and buying into the new ideas. For me personally, I’m enjoying the new sessions, the new training methods and the new ideas, so I’m enjoying my time with him.

“He [Emery] demands a lot. He’s a lot more intense, a lot of high pressing and keeping the ball so that it benefits us if we have the ball. It’s good for us, especially the attackers who like to have the ball a lot.

“It’s making me feel a bit sharper, I’m doing things with a bit more intensity. It’s not just for me, though, I feel like I’m helping the team a lot more. It’s benefitting me a lot more.”

Having burst onto the scene a couple of years ago, Iwobi’s development in the last 18 months has stuttered somewhat. Despite the slowdown, the club decided to reward him with a new long-term contract this summer.

Iwobi knows that the ball is firmly in his court and he not only has to repay that faith in him but simultaneously court a new regime.

“At a team like Arsenal, that’s always going to be hard so I always have to be on it in training and matches.

“I’ve got to be different. It’s going to be hard because we’ve got so many attackers and so many world-class players, so I’ve just got to prove that I’m on that level or as good as them so that I can be ahead of them, which is my aim.”

Not a hard task, but good to hear Iwobi is sharper.

With iwobi there’s always a feeling he should be up a gear in performance. He’s got great ability in holding up the ball but the worst decision making on lucrative counters in the final 3rd.

It seems like a lot of the players have something positive to say about Emery these days.
Let’s hope we see that manifest in the pitch next saturday.

I trust we will.

Why would they say anything negative? They do want to get played.

Why is 1993’s second comment getting downgraded? I actually prefer the added star.

On a serious note: I know it got downgraded because it’s a double post, but this whole thumbs up, thumbs down thing is making me hate people.

I do have the feeling that most of the squad likes what he does but I wouldn’t give too much on what players are saying on the official website. I doubt Arsenal would upload videos where they say ”it’s horrible at the moment, I wish I could leave.” But I hope the Chelsea game was a glimpse of what we can expect of Iwobi in the future. Always rated him and never understood the abuse he was getting on social media. Seems pretty humble and is an academy product. Should be treated way better than he has been in my… Read more »

Still have no idea what is his best position and I fear his potential is juuuuuuust below the level of forward we would want in the front 4.

Love Iwobi though. Loads of effort, good on the ball, deceptively powerful when running. I’ve pretty much given up predicting what our team will look like in 12-24 months but I hope he’s a part of it.

If he doubles down on his strengths and works on end product, he’s got a great chance. Good to see Emery giving him a chance.

Picked him to start for us only because 1) We lack genuine wide players. I’m not even sure this is the best position for Iwobi’s attributes. But bar him, we really only have young Reiss Nelson on the other flank (who should also be played IMO on occasions). Mhkitaryan is the other option neither fish nor fowl but a hybrid that can play wide but is slower. 2) Iwobi engages. Alexis did this for us. He had his own faults losing the ball way too often but he was an instigator who pulled the other side out of position bc… Read more »

damn…..just in awe that you spent all that time to type that much

down votes ? .. just good view points to make. I agree with it. we always slow a bit unless we are i possession of the ball ( in most cases ) new times ahead . miss the old geezer, and trust Unai all the way . look forward seeing Leno play 😀 # COYG !! from Iceland

Iwobi is close to a natural wide player( left and right). He played that role for Nigeria at the world cup qualifiers. Nigeria paid dearly for it, for putting him on the bench. He only doubts his abilities because we place Ozil, Micki, and even Welbeck ahead of him unmeritorious. See what he did when Emre placed his trust in him, a constant threat to Chelsea. Arsene started him sometimes. But there is a difference between bringing you on because the coach thinks you are the best in the position and bringing you on see how you perform. Douzi. is… Read more »

Iwobi like most of the players in the squad is a highly talented individual. It’s the team dynamic that’s coming up short so far in my opinion. Even when you have your back to your team mate next to you, you should be able to cut that through ball anticipating how your team mate will move. I hope to see this team dynamic building under Emery. Iwobi has a bright future of such an environment is created

I’d love to see Iwobi kick on this season. He had a bit of a stale season last season so I hope Emery is the catalyst for him to kick on.

That’s it my boy. Didn’t wanna right you off until I saw what happens under Emery. I suspect a lot of the younger guys will respond well to Emery. Still wanna see how we would perform as a dual 8 in a 3-man midfield. Loved how he used his newly built body to protect the ball and try and dribble away (though he didn’t really do that much dribbling against Chelsea). That physicality and dribbling, with Guendouzi’s metronomic ground covering and passing, and Torreira’s deep passing and defending on paper sounds like such a well-balanced midfield. I know people will… Read more »

Its exactly nit, whoever plays well starts. On that note, I don’t think Torreira is as water tight (yet) as many want to believe. In part we dropped second half at Chelsea bc some players (Ozil, Mhki) dropped their level (Iwobi was tanked too) but Torreira himself was tuend on a number of occasions and dispossesed from behind. He gave away a free kick on edge of the box but instead people prefer to criticise Granit for getting a yellow on the half way line. Criticism is not measured enough. I’m not saying of course Granit and Mustafi are far… Read more »

GK: Leno/Chec RCB: lichtsteiner/mustafi CB: Sokratis/Kos/Holding LCB: Monreal/Kolasinac DM: Guendouzi/Xhaka DM: Torreira/Elneny/AMN LM: Iwobi/Nelson CM: Ozil/Ramsey RM: Mhiki/Bellerin S: Auba/Eddie S: Lacazette/Welbeck Not ideal but I think it plays to our strengths. I would be be looking at purchasing a top quality defender and winger in the January window!! I’d be getting shot of Ramsey before this window closes (not that I dislike him, just genuinely don’t think he will sign a new contract with us) or in January at the latest. I would also be looking at other players to step up or be moved on, kinda think on… Read more »

How competitive do you expect us to be in the Europa Cup during the same time period?

Obviously the trophy should be awarded at the start of the season to whoever spent the most, to save playing all that tedious football shit.

more like two or three, not four or five

You forgot to mention Jose’s 300ish million……….
Just sayin, cause it makes me happy.

He was our best player against Chelsea alongside Guendouzi IMO and for such a young player gets waaaaaay too much stick on here. Should have had at least two assists but Mkhi made a hash out of a sitter. What I like most about him is that because his technical and physical fundamentals are so strong he can play in a variety of roles; 10, 8, either flank. Hopefully his end product will continue to improve and he can kick on from here.

Need to work on his goal celebration.Last week got trampled by teammates,jealous bunch ?

That is a dance celebration common in Nigeria called “shaky shaku”….

Say what you want about him but he isn’t a lightweight fairy that routinely gets bundled off the ball like mos of our midfielders.

top man iwobi, he was getting a bit stale under wenger

Very exciting to see him play like he did last weekend. One of his best games in recent memory, similar to a game last spring, forget which, where he played brilliantly with Laca and Auba. I can see Emery trying those guys together again. What I like about him when he’s “on” is that he can actually dribbling the fucking ball in the final third under pressure, hold onto it, and make something happen. Has been frustrating to see him struggle time to time but if Emery can develop him, that would be a huge plus for us.

It is not difficult for Iwobi to be sharper this season than last. Last season he was unfit. The only Arsenal player who regularly had cramp after 75~80 minutes, despite not being one who ran the most. I remember checking his stats after a game where he suffered from cramps and he was the worst midfield player in term of distance run and number of sprints. He was getting away with that lack of sharpness with Wenger. As Emery put more emphasis on pressing and fitness and not anymore one of the coach’s pet project, suddenly he is fitter. The… Read more »