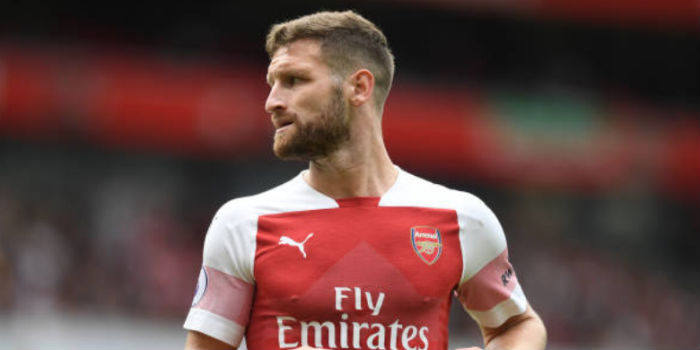 Shkodran Mustafi says Arsenal can’t afford to make further mistakes when they face Chelsea on Saturday having had their new playing style tested to the max by Manchester City in their opening game of the season.

Reflecting on last weekend’s defeat to the reigning champions, the Germany international admitted that implementing their pre-season work on the playing field proved particularly tough against Pep Guardiola’s slick operators. That said, he insists that playing with fear is not an option if they’re going to make Unai Emery’s tactics work.

“Playing against Man City, it’s not easy to put everything you have been working on onto the pitch,” he told the Evening Standard.

“Maybe against other teams you can get away with one or two mistakes. The next game is Chelsea — we can’t make too many.

“But if you are scared of making mistakes, that’s when they happen. We have to be sure about what we want to do. We are trying to play a different game from last year. If we’re confident, we’ll get results.”

During a nervy opening 45 minutes, Mustafi and new boy Sokratis were charged with collecting the ball from Cech at almost every re-start. Sometimes it worked, often they found themselves closed down rapidly. He recognises, courtesy of feedback from new coach Unai Emery, that he has improvements to make.

“He told me the positives in my game and what to work on. I’m happy because it’s difficult when you never know what to work on because no one tells you.”

Was that last sentence a not so subtle dig at anyone by any chance?

He is a German international so there should be certain aspects of the game that should come to him naturally; he shouldn’t be relying on a manager to pointing every single thing out for him.

What’s the point in managers or coaches, then? Should all players just get on with it? I’m sure all professionals want to improve their game every day, why wouldn’t they seek advice from those who watch them?

They were analysing games under Wenger so how he couldn’t see what he was doing wrong and where he should get better? Maybe Wenger really didn’t tell him directly and he wanted for him to figure out that on his own. And that applied for all the players. If they didn’t watch games again together he should it by himself. Even I watch some Arsenal games twice just to see where it went wrong. In my opinion that was the main thing that cost Wenger – the new young generation which needs to be nurtured by their managers/coaches. That is… Read more »

Wenger has said in the past he felt telling players the negatives and making them work on it has a detrimental effect on the things they were doing right. He preferred to nudge and prod in the right direction without actively saying it.
I am pretty sure Wenger knew what was wrong and what needed to be done but the passive communication wasn’t heard by some of the current lot.
I personally prefer active communication to Wenger’s passive style but to each his own.

No one can coach not down to the ground and wimp like slut. Absolute crass.

No one can coach you not to down to the ground and wimp like slut. Absolute crass.

What the hell are you on about?
Twice.

I guess this is what happens when you get annoyed and type. Not sure how it got posted twice though. My bad and I am sorry about it.

But what I was about to say was that..no one can coach you not to go down to the ground every now and then and be an absolute wimp. It looks ingrained in him.

Boy! I for one hate Mustafi.

I hope that clarifies it.

Bring back the edit button and some type of autocorrect that turns “my bad” into something eloquent.

Actually, every time someone writes “my bad” I’d like an autocorrect to transform it into a long piece by Rambling Pete.

Duh! I just don’t want it to turn into a piece by someone who is called Twatsloch.

Christ you are a sourpuss.

I was going to say the same thing… Here’s hoping thats the case, I know there are improvements we can make to the playing staff, but I’ve thought for a long time that we have the core of a decent team IF they are well drilled and disciplined.

The big question mark for me is to see if the ones that have been with us for a long time can adapt to the new regime or whether they’ve been too Wengerised.

I thought as much

Not so subtle F****ng millenials eh?
Well Emery will tell him point shout and give, him homework , so he better listen and catch up fast.

If the problem for some was a lack of coaching and precise instructions, we will find out by the end of this season. It would be better if there were no mistakes at all. Maybe it has to do with a lack of focus over 90 minutes. There is a decent player in there, Emery needs to bring it out of him consistently. The good thing is there is nowhere for anyone to hide anymore. So here is hoping that Emery can bring the best out of who he has to work with

Just my opinion but I dont think he should start for us, i would prefer Holding over him, and I just hope Emery doesn’t baby these guys if there not playing well, dont be afraid bench them and give somebody else a run to see how they get on, its okay to make a mistake, it’s when you don’t realize, and address that mistake then there becomes a problem!

A slightly uncalled for dig at Arsene from mustslidestafi, no professional footballer should need a manager to tell him that trying a slide tackle every 5 minutes is bad defending.

I’m a big fan of Wenger myself and i see what you mean, however, since he’s admitting to his many mistakes and his cluelessness on how to rectify them, i’ll give him a pass. Now that’s its all out there, there’s nowhere else to hide.

What if.. And this might be far fetched.. What if, some guidance from Emery results in mustafi becoming a realy great CB? I do think he possesses alot of the qualitys needed. If someone where to erase his mistake-prown style of playing, he could actually become one of the very best.

A Different George
Reply to  SweGooner

I watched the Man City match again, stopping and rewinding regularly as if I were getting paid for it. (I know, maybe I should get a life.) Mustafi had an early inconsequential error against Sterling (as I recall) and occasionally looked in difficulty when he received a pass from Cech near the corner. But overall, he had a very strong match–none of City’s scoring opportunities were caused or facilitated by him (remember this was City), and he consistently prevented threats from developing.

He’s absolutely right, confidence is a massive part of high performance, and you can see why last season he didn’t have very much of it. That’s a not too subtle dig at Arsene Wenger near the end there too. I’m not sure how I feel about that because it might just be him trying to curry favour with fans or the new manager. We’ve all met characters like him before in our lives and there’s something just a bit off about them. It’s just a personal observation but many of them appear to have that kind of forehead that juts… Read more »

Normally hate topics that are off topic. But this is too hilarious!

When I saw this name, I read the post a little slower just to enjoy the unravelling of the story for a little longer… Brilliant.

First appearance of the season. Pete comes off the bench and adds a bit of guile to the match. Perhaps not fully match-fit but, of course, class is permanent.

Who do we have here?!

Whenever I watch Mustafi defend, the song ‘Blinded by the lights’ by the Streets always comes to mind, unsure why.

by the streets??!!!!!, I think that you will find that its a Manfred man song, and not the streets song

I think if you dig deeper, you’ll find it’s actually a Bruce Springsteen song.
Yes, I grew up way too close to New Jersey.

yes, but you are far from confident

Now that he’s being told what 2 do, we shall see what comes out of it

Hold on a minute… actually…if you’re got at football, you might get results. Just an idea.

Cbacks did OK against City. For the most part I thought we kept our shape and did not go into panic mode. Midfield industry is key. Both goals came because midfielders (Guendouzi for first goal) and (Ozil, Guendouzi for the second) were somewhat culpable covering the edge of the box centrally but they were also very well worked goals. The other issues we still have to work on is crosses. In this case fullbacks need to also be aware. I think the fact that we could play out from back against City should give us a bit of confidence. Despite… Read more »