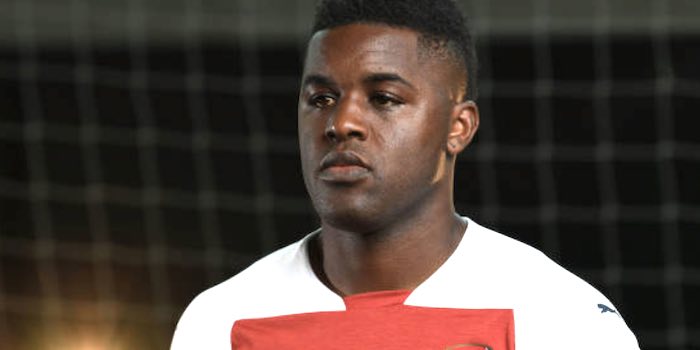 Joel Campbell has signed for Frosinone in a permanent switch from Arsenal.

The Costa Rican international joined the Gunners in 2011 after a prolonged transfer saga, but was unable to get a work permit and spent three seasons out on loan.

He did well at Lorient, Real Betis and then Olympiacos, and began the 2014-15 in the Arsenal squad before being sent out on loan again to Villarreal.

The 2015-16 season was his most productive in red and white, making 31 of his 40 Arsenal appearances in all competitions, scoring 4 goals and making 6 assists.

However, it wasn’t enough to convince Arsene Wenger who sent him out on loan again but his spells at Sporting Lisbon and a return to Betis were underwhelming to say the least – although he did suffer some injury problems.

The 26 year old was not even included in the Gunners Premier League squad this season, and new head coach Unai Emery clearly did not consider him a viable option for the upcoming campaign.

His most memorable Arsenal moment was the assist for Olivier Giroud away at Olympiacos in the Champions League (2’49):

Beautiful assist against Olympiacos. Only the best for him

I thought it was banter in what country is Frosinone? What league?

@BigArse . Thanks for the club’s origin bloggs should have done better!

It’s in seria A……newly promoted side

Well, he finally got out when he could.

A Different George
Reply to  Jorin

Many of us worked very hard to resist saying this. By the way, how old is Joel?

leroy
Reply to  A Different George

My Arse-nal
Reply to  leroy

Up until then he remains 26.

Mann
Reply to  My Arse-nal

I was just on the phone with professor of mathematics from Yale and he confirmed that Campbell will be 28 two year later, though he was not 100% sure.

I know I’m not the most averse in Serie A, but I had no idea who these guys were.

Best of luck to old Joe. Feel bad for him. Did well in all his first loans, then game and did better than Ox at the time and still got benched for him (who’s subsequently left us anyways). Those second loans did damage him, as injuries (surprise surprise) damaged his career.

Thought he did alright the few times he played for us but the movers and shakers thought different. Glad he’s finally had a permanent move and I wish him much playing time and all the success.

Did he… did he just get out?

Looked like he sat on the Arsenal bench and fell into the sunken place.

Does anybody actually know the bloke who told him “to get out while he can”? I’d love to know what he thinks now.

What is the origin of that anyway? Does anyone know how it started and who said it?

It was Stoke away 3 or 4 seasons ago I think. After Arsenal lost and team was making its way to train station, they were heckled by “fans”. One of them shouted something like “Get out while you can Joel”.

Right. I remember the occasion but completely missed the comment. Unintentional or not, that’s near genius.

After a Stoke game: https://www.youtube.com/watch?v=e7XKJSd4cpQ

The unintended comedic comment aside, it’s pretty disgusting to watch. I can only see shit like that being universally hailed as shameful the further we go into the post wenger era.

I believe his best moment for Arsenal was actually when on loan at Olympiakos. My Manchester United supporting friend asked me who Joel Campbell was and why I was rating him so highly moments before Joel smashed a 30 yard screamer past De Gea. “That’s who Joel Campbell is” I smugly responded.

Will consign him into the ether where Merida, Bendtner, Vela, Frimpong and The Jeff now reside alongside the spirit of Diaby. All the best Joel.

A Different George
Reply to  FanOfEboue

Fantastic goal–I don’t think I ever watched it before. Thanks.

Serie A is complete! Ronaldo AND Campbell

Has there ever been another Arsenal journeyman quite like Joel Campbell?

Can I getta hallelujah!

Hope Joel get his career back on track. Have a good season and can end up in a good serie A side. Good player when trusted. Feel like another one that was promising who almost almost got killed by Arsène. Preferring his irregular OX… who eventually betrayed him! A shame cause he really did believe in making it at Arsenal and he did like the club.

What a weird old time he had at the club. A decent and hard working player who I thought was a useful squad member. Oh well, I guess if two managers have the same opinion of him then they can’t have both been missing something. I never felt he looked bad in an Arsenal shirt but his loan spells underwhelmed.

All the best, Joel Campbell, and thanks for your contribution to the Arsenal. When Arsene said, in an interview in July’18 that he wished to apologise to all of those players that he was not able to help reach their potential, Joel was no doubt one of the players he was referring to. He was not given meaningful opportunities and runs in the team to consistently show what he could do. Nor was he made to feel believed in, confident, and trusted at Arsenal, whilst certain lesser players got more than their fair share of that. It was clear that,… Read more »

Hard working every game. At times probably the only player you could say it about on the pitch during some dire games. Always gave his all and never sgirked responsibility. Best of luck to him. Hope he does a girvino and comes alive in serie a.