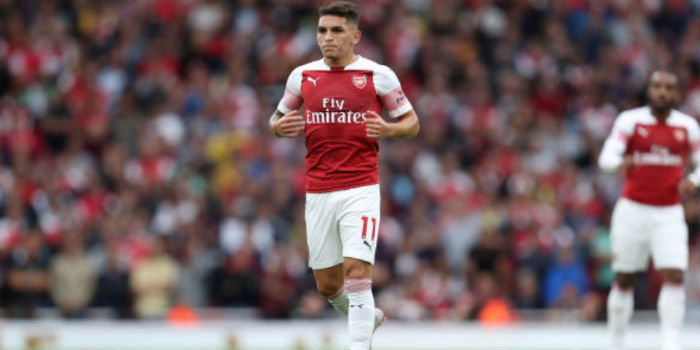 The Uruguayan, who spent the summer at the World Cup, enjoyed a tidy 20-minute cameo as a second half substitute against Manchester City and will no doubt be hoping he’s done enough to secure selection when the Gunners take on Chelsea tomorrow.

“Yes, he is okay every day and is training good,” Unai Emery told reporters on Thursday.

“He is now with the team and knowing and learning English conversation with us and can understand all the things we want to do tactically on the pitch.

“He is okay, the first match against City he played 15 to 20 minutes and I think this is good, I want to continue with him improving and to be okay to play.”

The Gunners lined up last Sunday with Matteo Guendouzi and Granit Xhaka at the base of their midfield with Mesut Ozil and Henrikh Mkhitaryan working the flanks and Aaron Ramsey asked to push up just behind lead striker Pierre-Emerick Aubameyang.

When Torreira came on for Xhaka he also held a deep role, although the manager thinks all his options in midfield, including Mohamed Elneny who did not feature, are versatile to play at least two positions each.

“Maybe another player, a more attacking player like Aaron Ramsey, he is more of an eight, 10 – but this possibility to play with two or three midfielders, it depends on each match whether to change or not and the demand in each match.

“Whether we can do one midfielder more either more attacking or more defensive, it depends.”

Get him playing, we need him.

Now we can play Xhaka in the position he plays successfully for Switzerland as a deep lying midfielder. He was not a natural DM.

Ya gooner
Reply to  Martin

What has he actually done for Switzerland though, at the world cup apart from scoring a wonder goal the same lapses in concentration occured from him. Deep lying midfielders still need to know how to defend.

He looked very good in many of Switzerland’s matches over the last several years (Euros and WC qualifying).

You obviously didn’t watch much if Switzerland’s matches. He was one of their best players as he has been for many years. You don’t win 66 caps if you are not a successful player

Oh can we please get over the position thing? He’s fucking awful attacking and horrendous defending, and has no qualities on the ball whatsoever. The only good thing he has is his shooting abilities

He must have some qualities on the ball. He had the most accurate forward passes in the Premier League last season

Switzerland is a level below is and what we compete against. He might look ”ok” in that team but in the Premier League where pace and power in midfield rule and slow players get the run about he is consistently late in vital moments. Sterlings first goal was his fault and countless others were. Torriera the man of the article at hand should be playing over him or do you think Xhaka has what it takes to keep up with Willian, Jorginho, Hazard and Kante? Pace kills and thats a fact, you can get buy on being quick but slow?… Read more »

Switzerland are ranked 8th in the world and were ranked 6th above England before the World Cup so why do you believe their standard is so low? Xhaka is was the best accurate forward passer in the Premiership last season playing a role which didn’t suit him. I am looking forward to seeing him play in his true position

It’s because premier league teams do everything together way longer, which means Chelsea or city’s pressing is much more practiced and organized than say a Serbia or Sweden can manage. Xhaka finds it tough to deal with pressing, but you would trust a jorginho/de bruyne to deal with that kind of pressure. The top teams in the league all have better deep lying playmakers than Xhaka(Eg. Jorginho/De bruyne) or they have a box to box midfielder/ball winning mid who’s much more rounded than Xhaka playing next to a DM (Eg. Naby kieta, Herrera). They’re better either in possession due to… Read more »

All the best guy. Whet our appetite with a master class at the Bridge tomorrow.
They have Ngolo, we have Torreira.

Lucas Torreira is a poor mans Lucas Levia, why on earth have we spent near 30 million on him.

Torriera is actually the smartest business Arsenal has done in years.

Who the hell is Lucas levia?

The dog I bought from Wal-Mart!

I see what you did there. Thats top level sarcasm… well done!

Let me fix that for you.

“Lucas Levia is a poor man’s Lucas Torreira. I am so glad we spent near 30 million on him!”

Much better. And stop with the negativity already.

We’re sorry he didn’t cost £70m mate!! Maybe then you can learn to appreciate him.

Did you not watch the World Cup? This guy is exactly what the team needed.

Sounds like Emery is playing ‘Bruce’s Play Your Card’s Right’.

Let’s just hope we’re not all sixes and sevens this weekend….hey…*cough*…I’ll get my coat!

Though we could use a good performance from Mkhi

He was excellent last season. Why is everybody making knee jerk reactions after one match?

Nono, I like him. Doesn’t change that a good performance from him makes our game that much better and would be better for both his and the team’s mindset.

Id love to know what the difference between a ‘six, eight’ and an ‘eight, six’ is.

Either way I don’t think any of our potential cm pairings make much sense without Torreira in them.

Primarily a six and with option to play as an eight too, and vice-versa, I would guess.

Be interesting to see how many numbers Maitland – Niles has. I wish we could just play this young man in his best position and let him thrive instead of playing him to plug a gap in the team.

It definitely has nothing to do with shirt numbers!

A Different George
Reply to  Savage

It has to do with historical shirt numbers. The six was a midfielder; the eight was an inside forward.

Savage
Reply to  A Different George

You’re right. I’m making a joke based on the fact that modern shirt numbers veer so far away from those traditions.

Or poop. Depends on context.

Maybe depends on the fullback

With everyone being fit?
I think this is our most balanced team

He has an innate sense of where to cover.

We can either play him with Guendouzi (high energy) in a deep two or with Granit OR he can be deployed alone in a 4-1-3-2 with Ramsey further forward accompanying Ozil and either of Mhki, Iwobi or maybe even Nelson.

I’m used to having eight tens and zero sixes. Or is that eight eights and zero fives? Or two twos?