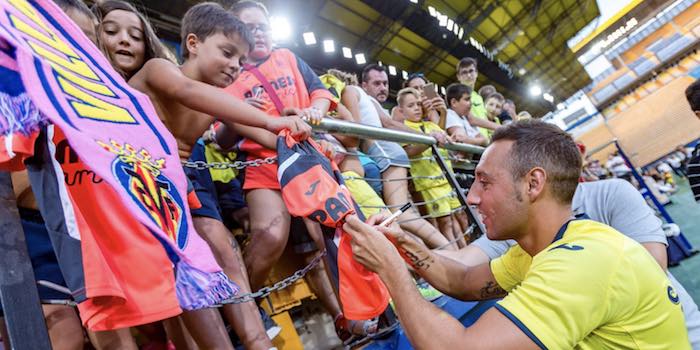 We know it’s not necessarily an Arsenal story, but anyone who doesn’t love Santi Cazorla is dead inside and we could all use a bit of feel-good these days.

The 33 year old was unveiled at his former club having signed a 12 month contract after proving his fitness during pre-season.

‘The magic has returned!’, exclaimed the announcement on the Villarreal website as 4500 fans turned up to the stadium to watch him appear in a smoke filled capsule on the pitch.

If that doesn’t sound like a lot, the town itself only has a population of around 50,000 so that’s a good chunk of them there to welcome back Santi.

Cazorla took photos, handed out gifts to young fans, and he’ll now look to make a contribution in La Liga next season for the team he began his professional career with.

After enduring a horrendous time with injury at Arsenal, during which he underwent repeated surgeries to try and stem an infection of his Achilles tendon which required skin grafts from his arm, it looked like he might be forced into retirement, but thankfully the football world will get to enjoy him for another little while.

We love Santi Cazorla here, and wish him all the best for the new season.

Nothing but love for Santi ❤️

miss the guy! miss the smile!!

Or at least another Aussie impression…

My all time favorite.

What a gem of a player and a person. People kept barking on about how import Özil and Sanchez were but Santi was the heart and brains of that team and without him it fell apart. Who knows what we could have achieved with him fit and on form. He’s up there in the top bracket of midfielders at our club over the last 20 years e.g. Vieira, Petit, Overmars, Pires, Fabregas and Özil. Immensely talented. Will miss him sorely and hopefully our midfield finally adjusts to his departure and learns to function properly again.

Ozil isn’t there yet

My thoughts
Reply to  Builderarch

Hopefully with a solid 2 DM platform and solid finishers in auba and laca, ozil can truly kick on and assist 50 goals this season 🙂

Players very rarely get the happy ending to their careers that they for the most part deserve, so here’s wishing good luck to Santi and the rest of his playing days.

Its shame this is not arsenal related

Probably because knowing out luck the door won’t open and the player would suffer lung damage as a result of the smoke and be ruled out for a season or 2!

I wish him nothing but happiness on his return to football. Great attitude, better player, and what a genuinely nice guy.

The little genius will be missed, as a player and person.

Love Santi and really happy to see him smile and enjoy Football. But I can’t be the only one wanting to know how did he appear? Wish we could do that kind of magic and get back a young Santi..

One of my favorite arsenal playera! I’m gonna miss him!

I’m confident we would have added at least one BPL title to our name if Santi had stayed fit the past 3 seasons! Sigh!

That picture has made my eye water. I’ll always love you Santi.❤

Much love for Santi Cazorla. Amazing player.
And what a cool entrance!

I can’t tell you how much I enjoyed that video. I absolutely love you Santi!!!! Go and smash it!!!!!

After seeing pics of his foot, this is quite inspiring.

Really hope he gets a good go of it and even if he doesn’t he gave it all he could.

I thought it was gonna be Szczesny in that capsule, having a crafty one, for a minute. What a magic!

Haha. Well said mister. Now i can’t get the image of Szczesny nervous smoking profusely in a glass capsule out of my head.

One of the best Wenger/Law signings.

A real coup to have got him.

Just don’t play against arsenal. I’ll be forced to listen to james blount while weeping gently if that happens

One of the last gems Wenger bought to the club… And what a gem he was!

And that was a pretty awesome entrance, no?

Love Santo. Will miss him but wish him all the best in his next adventure.

Good luck to him. I was just wondering if any other club has been robbed of such an array of talent through injury. Santi, Rosicky, Diaby, Eduardo, Vermaelen. That is a some fantastic group that we either never got to see the best of or was denied just as they were reaching their potential. I’m sure there might be others but we have been hit hard by injury over the recent past.

Might have to snag a Villareal kit with Cazorla on the back.

I would love to see Arsenal do stadium unveilings when we first test too.

This was very cool, nice touch for the magician who had been my favourite player in his time with us. Really happy he’s going to be sharing more football again.

One of the best I’ve ever seen in an Arsenal shirt.

This made me feel fuzzy inside.

Santi is a jewel of a man and footballer. Hope he enjoys being back in Spain and look forward to seeing him get chubby on good wine and jamón in his retirement.

Shine on you lovely diamond

A true legend of the hearts

Oh Santi Cazorla! Whenever I heard that chant, I always used to think “OUR Santi Cazorla”. He was a magician of a footballer, his best performance being that one against Man City where he literally beat them on his own, driving through their midfield from deep like Frodo against the Uruquai on his way to vanquishing the whole of Middle Earth. If only we hadn’t been robbed of the last 2 seasons due to his injuries. And who will ever forget his free kick in the FA Cup final? Just happy that he’s able to play a little longer back… Read more »

I think the 2014/2015 Aston Villa FA Cup final was an even better performance. Such is Santi.

I’m so happy Santi is back playing. Probably the most enthusiastic player I can remember (Wrighty was similar), and it’s a real shame we never got to properly say goodbye so a player who brought us so much joy on the pitch. No sure Villarreal would let him, but it would be great if we could have him for just 5 mins of the legends game to give him a proper send off.

I love you, Santi!

That unveiling though, what a magic!