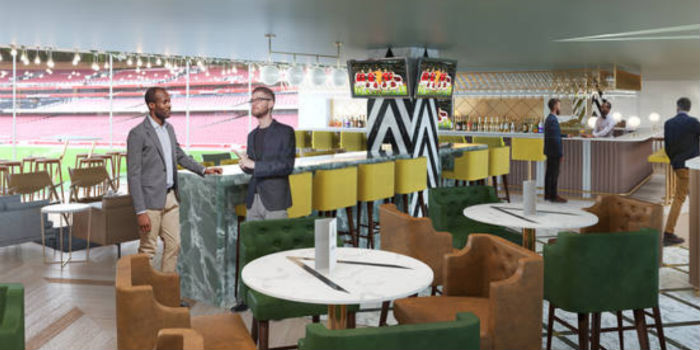 Arsenal’s new Managing Director Vinai Vinkatesham has confirmed that further sections of Emirates Stadium’s Club Level will be spruced up next year.

During the summer break, an additional row of seats was added to half of Club Level. The intention is that the full 780-seat row, which has been bolted on to the front of the existing rows, will be completed once the current season ends.

The work will bump up the stadium’s seating following a decade of adjustments, made for health and safety purposes and to increase access for disabled supporters, that had forced a drop below the original 60,000 capacity.

Elsewhere a new private members’ club called The Avenell Club will offer ‘wall-to-wall, floor-to-ceiling glass with panoramic views of the pitch’ and is to be created in the Executive Box Level North area. Presumably, this is for people who’d rather not brave the elements or our incredibly hostile atmosphere.

Major renovations are also planned for the Champions Bar and Highbury Suite. The former will get a new look and feel based on ‘what it takes to become the best of the best’ – whatever that means.

The latter will be turned into a ‘lively street market’. For those without access to such surroundings (no, doubt that’ll be most of you), don’t worry! You can already enjoy that environment on the streets around stadium…just with added burnt onions and horse sh*t.

On the upcoming changes, Vinkatesham said: “We have been at Emirates Stadium for 12 years now and have recently seen a change in what some fans want in our premium areas. This involves supporters wanting more open and informal hospitality experiences and this project is responding to that demand.”

Presumably, Sp*rs are doing much the same thing at their new place. LOL.

Venkatesham elected to ECA board

“Elsewhere a new private members’ club called The Avenell Club will offer ‘wall-to-wall, floor-to-ceiling glass with panoramic views of the pitch which are completely sound proofed so you aren’t disturbed by the noisy riff raff outside’”

I vote to scrap all this shite and build safe standing in the North Bank.

I think it’s more fun standing in the East Stand, and they don’t sing up there. What’s the point of that?

What a way to watch us play FC Cheeseburger in next year’s Europa League!

Don’t jinx us. We could watch Everton and Watford play that foodish competition

I dont think FC Cheeseburger will make it to next years Europa League. Dungbeetle United are looking more likely to compete for it.

While all these are going on, can you please beef up the playing squad also?
This is Arsenal Football Club. There is football before club.

Thank Christ. I haven’t been able to sleep at night worrying about the hardships of the club level “fans”. It bothers me hugely especially while spending 45 minutes queueing to get into highbury and islington tube after every match.

Just as bad. Extra walk time plus extra train time. Maybe we could have public transport that can cope?

45 mins in the Tolly is time way better spent

Stick to the left by the metal barrier they put up… crowd moves faster… you have to climb over the odd bin liner though!

They should do something about the quality of the beer…tastes like the Arsenal board, coaching staff and players from the A and B teams all got together and pissed in it

Gotta do something with it after the anti-doping screens

Fucken getting pissed off with this club. Have they mot realised that spurs stadium is bigger than ours wtf. Extend the stadium for supporters

Spurs will be doing it in about 12 years, but 5% bigger and triple the cost.

Let’s face it, we’ve moved the entire club twice with no problems and yet Sp*rs have managed to fuck up moving out briefly while the builders are in.

Not sure that first move really counts. Everything fit in one coach, needed only four horses.

To be fair they moved out just fine. It’s the moving back in that’s a real fuck up.

…. and it’s not like they have silverware to look after.

If that’s a real visual it looks bloody awful.

Corporate wank is alive and well.
Pass the gin and prawn rolls Jeeves … and spare the burnt onions and horse shit.

I can’t even afford a normal ticket, i wonder what the price is to hire out the Avenell club box!
Any ideas?

“Presumably, Sp*rs are doing much the same thing at their new place. LOL.”
Correction , Sp*** can’t do as much as as we do for they are still shit