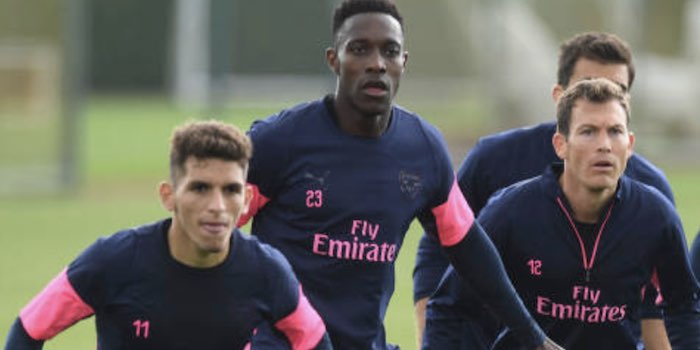 Unai Emery says the demands of playing in four competitions means he’ll be giving time to some players who haven’t had a lot of minutes on the pitch this season.

The Gunners face FC Vorskla at the Emirates tomorrow night ahead of a Premier League showdown with Everton on Sunday, and much like Arsene Wenger did last season it looks as if the Spaniard will mix it up in Europe.

There are likely to be starts for the likes of Bernd Leno, Stephan Lichsteiner, Rob Holding, Danny Welbeck, Alex Iwobi and Mohamed Elneny – wile there are whispers that Lucas Torreira could make his first start for the club.

The new boss outlined his thinking at his pre-game press conference.

“We have four competitions this season,” he said. “Tomorrow is the Europa League, Sunday is Premier League, then it’s Carabao Cup and then we’re going to play in FA Cup.

“I want the same thing for every player because each match is important. The second situation is that we need to give minutes to the players who can produce the best performance for us.

“The best 11 will play tomorrow so that we can continue to improve in our way both tactically and individually.

“What’s important for us is to produce a winning performance but also to continue to improve.

“Tomorrow we are going to change things to give players the opportunity to find minutes, to find confidence on the pitch and then maybe tomorrow’s players can play on Sunday too.”

With Konstantinos Mavropanos injured, there will be some senior presence at the centre of the defence, while according to our youth correspondent Jeorge Bird, young left-back Dominic Thompson trained with the first team today as Nacho Monreal is the only available specialist in that position.

Noiceee! Looking forward to Lucas unleashed from the start. In other news, John Terry remains a massive cunt

I think we should promote him to gaping arsehole

The Terrier would be great to see, though we need to take care with him, I’d love to see him playing versus Everton on Sunday too.

Auba as an attacking full back maybe? Imagine Auba-Hector wing stream <3 .He is not that great with passing and stuff but his pace and verve on the overlap might just be enough to upset Europa sides.will also allow us to field all four of mkhi,ozil and laca in the same team along with ramsey.
Can't hurt to try at the very least! 🙂

Where’s Jeremie Aliadiere when you need him?

Aliadiere was in fact the commentator on Arsenal Player’s video of the Newcastle match. Not very good.

It might work on fifa but this is real life mate ??

A balanced mix of youth and experience. Would love to see Smith Rowe and Pleguezelo make the bench too.

Mavropanos? “A balanced mix of youth, experience and injury carrying”

Didn’t you read the article? Mavropanos is injured.

blogs has picked who he thinks will play tonight, and emery says he is going to pick his STRONGEST TEAM, so lets see who is right

I like the idea. We can continue this argument on your blog. Where you keep us posted on arsenal related content daily. Where I’ve been following you since 2004 or thereabouts.

A balanced mix of youth and experience. Would love to see Smith Rowe and Pleguezelo make the bench too.

Has the PUMA icon on Welbeck’s outfit faded, or is it supposed to look faded? Either case, these training kits suck even more than the playing kits.

We have to be a little careful of what we wish for. I’m all for the move away from Puma, but Adidas dressed the ManUre in baby pink last weekend…

Was that deliberate? I assumed that their kit man had left a red sock in the white wash.