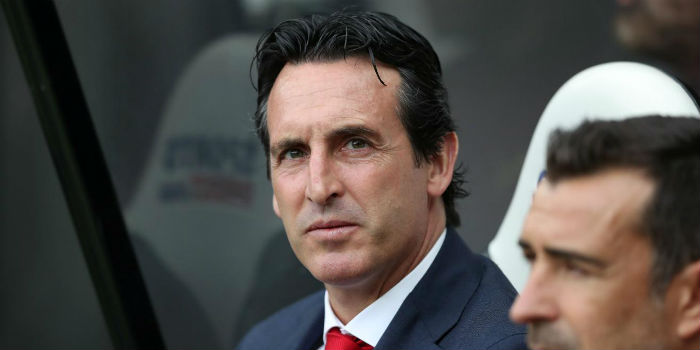 Arsenal have yet to keep a clean sheet this season and even against European minnows like FC Vorskla, lapses in concentration cost us two goals.

It’s a worry for Unai Emery in spite of the fact his team has won four game in a row, and he’s outlined how he sees his side making improvements at the back.

Speaking ahead of tomorrow’s Premier League clash with Everton at the Emirates, the boss revealed his thinking about where we can get better defensively.

“With this process I think we also need time, but it’s our first disappointment from the first games of the season. We need to improve this.

“There are different things,” he continued. “For example in the match against Newcastle we didn’t concede a lot of chances, and the goal that we conceded in the last minute is something we can work on.

“It’s something where we can give them the mentality so that it doesn’t happen again. I think this match is a good example of how we have improved in this.

“Yesterday [against Vorskla] was different because after we scored four goals, the team relaxed a little and conceded one or two goals.

“One was a mistake, but I think we have the solution and the first chance we have to prove that is against Everton on Sunday.

“It’s very important and our objective to improve in the defensive moments.”

Let’s see what tomorrow brings. First things first, we have to win, but it would be a genuine boost to shut out the opposition – in particular former Gunner Theo Walcott on his second return to the Emirates.

Let’s keep a clean sheet please and see some reasons why, whether it is positioning, effort or personnel. However let’s also keep the ball a lot and be in their half, they are unlikely to score from there!

Especially let’s beat Theo and Everton and keep on a roll.

Clearly emery is a hard worker, it eill take some tine for thst to translate to the team.

It takes some times to translate into readable.

I know, having to read a whole sentence before posting is tough.

Yes please.. More like Athletico Madrid only we score more will be awesome

Just asking for the world then, not much.

good luck with that em, unless you are thinking about buying eleven defenders

As long as we win games it doesn’t matter about clean sheets.

Essentially that’s true, but there are going to be games where we just can’t get the ball in the net. At this point a solid defence is going to be vital

Even though a lot weren’t crazy about our summer recruitment, I do think there is a lot of value in brining in players like Lichtsteiner & Sokratis not only in that they can help us in the short term, but really in that they can teach younger players like Bellerin & Holding how to defend. If those 2 are the future then it’s important that we have senior players in teaching them the tools of the trade and in Bellerin’s case applying some real pressure to his position. I realize Chamber’s had a good pre-season & looked good in what… Read more »

Just seen Fulham/Watford game- Chambers was very dodgy, almost gifted a goal, only Troy D.luckily made a complete cock-up of it, bless his little cuddly koala bear physique..Hopefully Calum is going to learn from mistakes made in all the playing time he’s probably going to get this season at FFC

Emery emphasise on playing compact games and playing from the back. I think the reason is Holding is more comfortable with the ball at his feet than Chambers.

it was various news outlets i think that all reported that emery will play chambers more than others also due to the fact that chambers was also one of the first guy to sign a contract . but if u look at preseason games chambers played at centre back position very few times if at all. i remember him playing right back centre midfield which on hinsight is very odd if your manager wanted him to play as centre back for the season. papa mustafi holding all played more than him. ir seems emery allready made up his mind after… Read more »

Felt that clubs were interested in Chambers more than Holding, so Chambers going on loan was the easiest choice and he would easily get more games. If Holding or Mavropanos were to go on loan, they would probably be on the bench, which is similar to what they will experience here.

chambers had a good game against Watford yesterday

Arsenal’s defence under Wenger had become a joke the last 10 or 15 years. Flash back 2005 Boro were leading 3-0 only to lose 5-4.Similarly the 5-4win over Spurs. Then it was ok because the gunners were winning. The 8-2 massacre followed by the heavy defeat of 6-3,5-0 etc against the top teams. No wonder the gunner s are bottom of the table against the top 5 .You can add the 5-1lossess against BM to build a case against the fm. Now 2018 the defence cant keep a clean sheet.The problem is the defender s dna is not 100% oriented… Read more »

The conceding late on in games we are comfortable is a real throwback to the last few seasons. Glad he’s aware of it and unhappy with it.

Arsenal IS great. Always has been and always will be.

Have to say Sokratis last two matches has been decent. Although caveat last game was not that much good as an indicator since it was against poor opponents and we still let in two goals without Mustafi. Hope he can impart some of his organizational skill and experience to the rest. There’s a good player in Mustafi if he can cut out the errors, He is good for 97% of the time. We don’t have any alternates who are better so he has to step up. Monreal I feel will get some protection against Walcott and Everton maybe with Iwobi… Read more »

Quite obviously even against modest opposition like Vorlskla, we don’t need Mustafi to leak goals. How we can let a goal in in the dying ambers of the game is beyond me. As mentioned many times, its not just the Cbacks. Had it been Mustafi for that last goal from Vorskla instead of Sokratis in front of Sharpar, there would have been the usual recriminations against the Germans. BUT as mentioned many times, the midfield has to do its job too. Elneny too slow coming back to cover Sharpar for their second. We need the midfield to stay sharp covering… Read more »

Given Emery said at the beginning that he prefers to win 5-4 than 1-0 it might take quite a lot of work to get the team in the right defensive mindset. Not sure that’s his game although we can only hope for improvement there.

listen, it doesn,t matter if we don’t keep a clean sheet, as long as we win, even emery said that he would rather win five four than win one nil, so stop going on about a clean sheet, it don’t matter