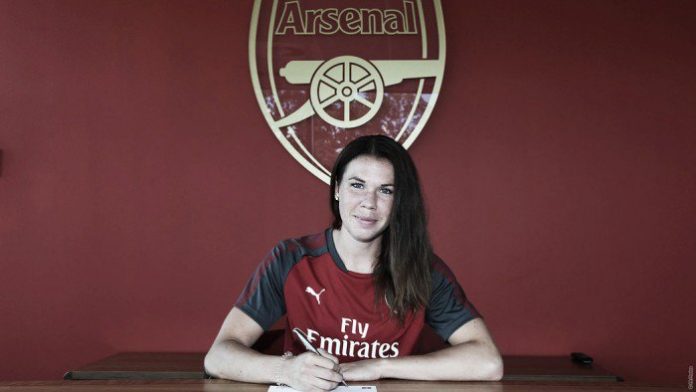 Arsenal Women’s right-back Jessica Samuelsson is back to full fitness after a 10 month layoff with a painful foot injury. The Swedish international spoke with Tim Stillman exclusively for Arseblog News about her very painful foot injury, her recovery, the frustration of getting it so early in her Arsenal career and taking over from club legend Alex Scott.

Last summer, Alex Scott first floated the idea of retiring from football as her burgeoning media career began to take off. Arsenal managed to convince Alex to stay on for one final year, but did so on the understanding that her media duties would keep her plenty busy during the season. The Gunners moved to sign Swedish international Jessica Samuelsson, a roving right-back very much in the Alex Scott mould, to take up her mantle.

Samuelsson was ready for a new challenge after 7 years at Linkopings FC (save for a short loan at Melbourne Victory in 2013-14). Jess was just beginning to settle into life in England, playing two games for the Gunners, before joining up with her international teammates last October. During a 5-0 victory over Hungary in Boras, her goalkeeper Hedvig Lindahl came out to punch a Hungary free-kick clear.

Samuelsson also rose to head the ball clear and caught Lindahl’s fist in the back of her head. But that was the least of her worries. Jess fell awkwardly as Lindahl landed and her foot was stuck in the turf. Immediately she knew something was badly wrong. “It’s really hard to explain because it’s such a rare injury,” Jess explains to me shortly after the 3-1 win over West Ham, where Samuelsson has continued her rehabilitation with an appearance from the bench.

“Two of the bones in my foot were dislocated and all of the ligaments tore away from the bones. So first I had to have an operation to have the bones put back in the right place, then all of the ligaments around it had to heal.” The injury occurred last October and Jess has still yet to complete a 90 minute match, but is in the very final stage of recovery.

Last time we played Hungary isn’t my favorite day. 24/10/17 when I dislocated my mid foot bones.. The score was decent tho ? Let’s do the same today girls. Good start with two goals up after 45min ???? #swewnt #wcqualifiers

The injury was especially frustrating coming just two games into her new adventure in England with Arsenal, “It was very annoying,” Jess says with little hesitation, “I had just come to a new country and I wanted to take one more step in my career and I was ready to throw myself into it 100% so it was really frustrating to have this injury.”

Many players that incur long term injuries decide to recuperate closer to home, but Samuelsson undertook her rehabilitation in London watching pretty much every home game from the stands. The Swede says she was determined to stay close to her new teammates despite the injury, “Because I was new here, it was important to me to get to know everyone and be close with the team. I really like London, I like the environment at Arsenal, I like the club a lot. We have some of the best doctors in the world here, so the treatment I got here was top, top class.”

Samuelsson was a surprise inclusion on the substitute’s bench for Arsenal’s 3-1 FA Cup Final defeat to Chelsea at Wembley in May. She admits that she tried to return a little too early and suffered a small setback in her recovery, “Initially, we hoped to get me a few minutes in a game before the summer break, but I think we got a bit too excited because the recovery was going really well.

“But I had a setback and had to take it one step back. It meant that I had to take it a bit easy during pre-season so I haven’t had 90 minutes yet. Hopefully I can get 90 minutes with the U-21s soon.” Jess has that pleasing habit that many Swedes have of not talking around a subject or prevaricating, “It was very annoying actually,” she exclaims, summarising her answer.

Jess will eventually take the mantle of club legend Alex Scott, who retired during the summer. When I mention Alex’s name, Jess laughs a little, recognising the gravity of Scott’s reputation, “It was amazing to be able to train with her and to see her train. She was such a good captain and a great leader. It was an honour to be able to be her teammate and hopefully I can fill her spot well.”

Let her tell you everything you need to know herself! ? pic.twitter.com/jbTDtV3gZt

Samuelsson changed squad number this summer, swapping the number 25 for 12. Scott’s departure left the number 2 vacant, but Jess says she was not interested in taking it over, “I don’t like the number 2,” she laughs, “I wanted the number 15 to be honest, but Katie [McCabe] has that, so I went for 25 instead. But after my injury, I wanted something different so I just went for 12. Simple as that!”

Jess may be wearing number 12 nowadays, but with her rehabilitation in its final stages, expect to see her back in the starting 11 imminently. 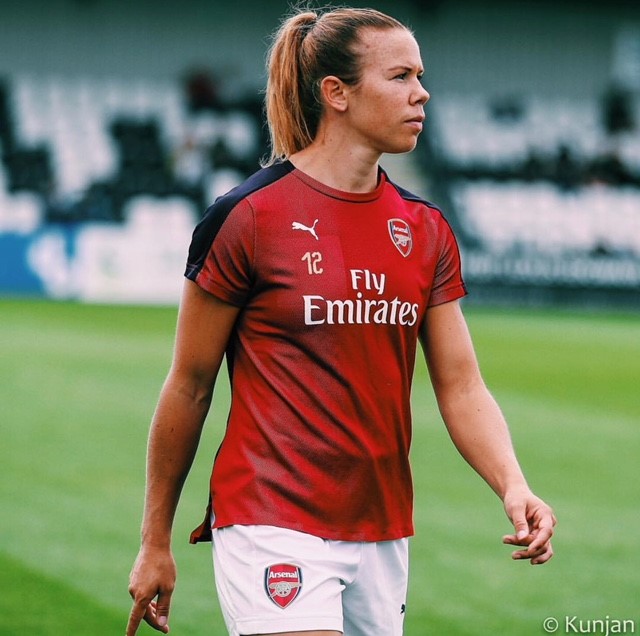 Arsenal begin their WSL campaign against Liverpool on Sunday at 1230pm. Tickets are available here for £6 adults and £3 concessions (otherwise it’s £10 adults and £5 concessions on the turnstile). The game is being screened live on the BBC Red Button and BBC Online.

Still remember her signing, felt like yesterday but it’s 10 long months for her. So glad that she’s recovered and look to play a part in the new season!

Poor girl. We seem to specialise in one-in-a-million injuries. It will be very good to see her playing.