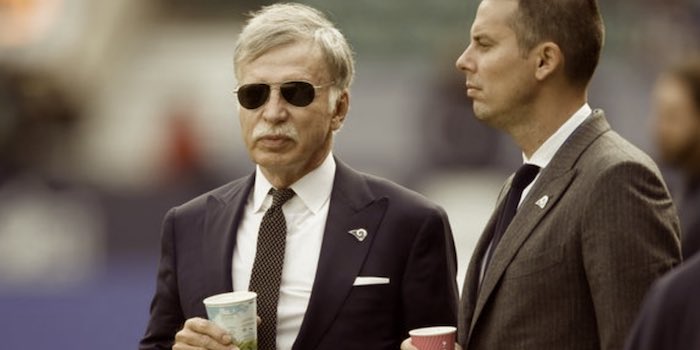 According to a news release on the NEX Exchange, KSE have completed the compulsory purchase of the remaining Arsenal shares, giving them a 100% shareholding in the club.

Stan Kroenke’s investment vehicle last month purchased Alisher Usmanov’s stake in the club for £550m, and under company law could then force the sale of all other shares, including those of long-term fans who had no desire or intention to sell.

We now wait and now what kind of an Arsenal world we’ll live in now that Kroenke has full control, and whether we’ll hear anything from them about their ambitions from the club above and beyond what was in the offer document.

Changes have taken place at boardroom level with the upcoming departure of Ivan Gazidis and the appointments of Raul Sanllehi and Vinai Venkatesham as Head of Football and Managing Director respectively.

More boardroom shuffles are expected with Josh Kroenke, already a board member, expected to take a more hands on role, and some new arrivals and further departures would be no surprise.

RIP Arsenal. No longer the club I once knew or loved.

Lack of Perspective
Reply to  Glocken

Honestly…no one would care less as long as they play better.

Welcome to modern day sports. It’s very sad to see that some of the core history of what made this club great is gone, but at the end of the day it’s still the badge on the shirt that we all love and pay to see. Not the cunts that own the badge.

It is likely that this will close almost every source of information about what is done at the company level. I’m not sure that public knowledge of what was being done made any difference, but insofar as it did, that will end.

Pedant
Reply to  A Different George

I don’t think we ever heard that much, Gazidis wasn’t exactly forthcoming.

I meant required access to financial information while the company was listed; agreed that it probably made little difference.

What was the initial and final price per share?
Just curious.

When the board sold to Kroenke, is this really the future of Arsenal they had in mind ? I recall them saying they would not just sell to anybody. Arsenal’s future had to be placed in the right hands. Were they lied to ? Or did they just take the money and run, looks like the second option.

if I thought the Kroenkes had an aim to win the PL and CL I wouldn’t care less.

But have seen no signs of that so far, so hard to believe that they do (though if they want to get to the next level as a club that’s exactly what they need to do).

What about ”veni vidi vici”? Sorry, cannot stand these Kroenke bastards either. May they rot… whatever that is in latin.

The club is purely a profit center for these guys. Maybe a fun project for Josh who I would guess is in over his head but they either don’t realize or don’t care that this club means everything to so many.

I see more risk involved with this owner. This isn’t just like owning another American sports team. If they screw this up enough their are dire consequences, and we don’t even have to name names of other clubs who have faded away to lower divisions. Maybe I am over-doing the risk, but one of the reasons I glommed on to the Arsenal twenty years ago was to get away from the American model where results don’t seem to matter. Like Pendant, I would like to see a whole lot more ambition from these guys both on the commercial side and… Read more »

Sorry, should be Pedant.

No need to be pendantic.

I do think there is some truth in this. The way that the American sports franchises are set up its almost impossible to lose as an owner. The leagues are closed parties – no promotion or relegation, just the same teams going again every year, and people will watch, and the money will come.
If they fuck up badly at Arsenal, fall out of Europe, or even away from the top 4 for too long and revenues will suffer. Even if local fans stay loyal the global markets which are so important will not.

I await Nina Bracewell Smith’s opinion on the matter.

We know what she thinks. She has already admitted she regrets her decision to sell her shares to Kroenke

Whilst it’s always nice to know the financial status of it club the main issue is whether or not the investment will be made by KSE to get Arsenal competing for the EPL and CL.
Unfurtunately I see Kroenke being a simple business man and not a passionate supporter – so I can see him thinking along the lines of why do we have so many thousand people on the waiting list ? Why not just increase prices until demand meets supply. I hope I’m wrong.

Now the New Dawn Era have being ushered in fully….

Let us all be optimistic…..

How many fans truly cares about the financial situation of the club….

We all want the joy of winning a tangible trophy so if this era will deliver loads of trophies then why not…. Legs crossed….

For what it’s worth, I was actually proud to support a club that wasn’t just some plaything of a “foreign billionaire”. Call me old fashioned, but I took pride in our results because we were up against silly money at other clubs. Now we’re in the same boat, except our new owner does not seem to throw around money like some of the others do. So we’ve got the worst of both worlds. But no, as long as we’re entertained and compete for something, I’ll be somewhat appeased, but I used to love a “club”. I cannot love a “company”… Read more »

This is the inevitable direction football is going, it doesn’t really change anything

What a sad day for our club

Sad day. Fingers crossed that we are all wrong and today is a bright new dawn for The Arsenal.

Well there aren’t any playoffs here kse. You don’t win anything and no shot at trophy if you’re in 10th place like there is in america.

Exactly! That’s why I always stop watching the World Cup after the group stage; who needs some soft “knockout stage” to see who’s better on a given day?!?

Trying to find a Hollywood venue for Brentford game today, any suggestions would be most appreciated?

This guy has proven that he is all about money. He had the luxury of a genius like wenger making lots of money by identifying cheap takent and selling them at massive profit. I will never buy another arsenal ticket tshirt or anything to make these greedy people more rich

I’ve been boycotting afc since 2015, no chance I’ll go back now, not until Kroenke is gone (dead or alive), anyone who does is a fool, try looking at his crap us sports ‘franchise’s for a vision of the nightmare future.
RIP AFC

Its always been about money.

I can’t put into words how disappointed I will be if Arsenal remain under Kroenke ownership for the rest of my life. How are Flamini’s finances looking these days? If we’re going to be owned by a billionaire, might as well be someone who loves the club. At least he’ll put money into it, and he’ll make sure his best bud Mesut is feeling all lovely and assisty again.

Its not like Usmanov with his minority stake was any better though. At very least now, there is complete clarity which direction the club will take. What worries me more is Gazidis leaving and who replaces him. Like it or not, Gazidis was the only (very limited) check and balance left. Who is recruited in to drive the club’s footballing direction forward is key. On the positive side, Kroenke sanctioned the right choice of manager with Emery. I’m less sure about the recruitment team with Mslintat but perhaps it was the next best thing to replacing the acumen Wenger had… Read more »

To be perfectly honest as an American fan of only 12 years, I’m fully aware of my tenuous connection to the club, and there is certainly insecurity there (which says more about me than anything). All the jabs at Kroenke and the American invasion of investors feels like it’s pointed at us US fans as well, which even if purely my perception, speaks to a feeling I’ve had since the beginning that I’ve been horning in in a cultural sense. A form of cultural appropriation without the racial baggage if you will. There’s the feeling that us American’s collective interest… Read more »

Arsenal fans are not just local, but all over the world, and no true Arsenal fan is an interloper wherever they come from. Is a fan who gets up at all hours of the night to watch the Arsenal any less of a fan than someone who lives down the road and can’t be arsed to get themselves to a Europa League game? I don’t think so. You’re not responsible for the fact that Kronke bought the Arsenal any more than I am. I’m really hoping that he realises that he is a custodian of something very special and acts… Read more »

Well I’m from India and have been supporting the club since the 2010-11 season, so not very long ago and I feel similarly sometimes that would we be considered equal to the people who have been supporting the club since they were little kids and who are locals to the place? But then I figured that it’s not a competition to see who is a better fan, we are not competing against each other, our interests are aligned. If you feel down when the club loses even the stupidest of dead rubber games and if you feel it’s a good… Read more »

Let’s hope Josh had some ambition for the club and keeps us in the right direction. I’m gonna back him for now..