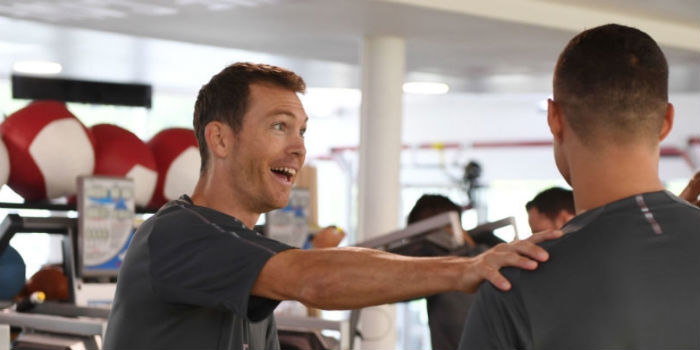 Stephan Lichtsteiner hasn’t played much football for club or country since he moved to Arsenal in the summer, but he’s not worried. He knows his time will come.

The veteran right-back, a free signing from Juventus, may have made his debut against Manchester City in the Gunners opening game of the Premier League season but since then he’s played second fiddle to Hector Bellerin.

He’s even had to take a back seat with the Swiss national team, watching from the stands last week as teammate Granit Xhaka wore his captain’s armband in the 6-0 thrashing of Iceland.

Reflecting on his situation in an interview with homeland publication Sportal, he said: “I could have changed to five other clubs in the summer, knowing that I would certainly play 47 out of 50 serious matches.

“It doesn’t irritate me, as in 2011, when I moved to Juventus, I wanted to join a big club. I was looking for a demanding challenge in a new league.

“That’s why I knew from the very beginning at Arsenal that I had to fight for the regular spot against Hector Bellerin.”

In seven years at Juventus, Lichtsteiner won seven Scudettos and was a mainstay in the first eleven. He admits his change of circumstance is unusual: “It is quite unusual for me to be a substitute.

“Three games in a row [on the bench], that’s never happened to me. If you have achieved a lot in your career, you have high expectations of yourself and want to play. But I also know that I will get the chance to play games.”

While he may be 34, Lichtsteiner insists that he’ll not be retiring from international football to focus on his challenge at the Emirates. He doesn’t need to just yet, the data says so.

“For me, stepping down has never been up for debate.

He added: “If I have to admit that I can not keep the level of the last few years, then it is time. But then I will not only resign from the Swiss national team, but finish my career. Based purely on performance data I have the physicality of a 28-year-old.”

Quality replacement though am looking forward to seeing his strong and winning attitude on the pitch.

I feel like he’ll do well at centre half.

Surely he knew he would only be playing the odd game here and there and his role was to be an experienced backup player, I don’t think he has much problem with his situation.

He probably looked at bellerin as a player who is vulnerable at the moment, it can only be a matter of time before his defensive weaknesses catch up

Could be play centre back?

He’s been talking to Rosicky

That photo with that headline! Priceless. Lol!

Would like to see him get a few starts in the league. Not that I think Bellerin is bad, just I think liechstiener will play well and put pressure on Bellerin to be better. The season is you though, I’m sure he will play a lot of games

I’m looking forward to him getting stuck in. He’s got a viscous streak a mile wide

Viscous – having a thick, sticky consistency between solid and liquid; having a high viscosity. “viscous lava”

I’d prefer him to have a vicious streak.