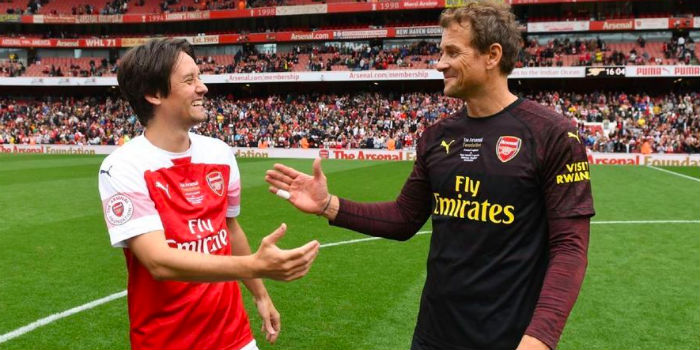 David O’Leary says he was ‘ready to kill’ Jens Lehmann after the German stole the limelight from Tomas Rosicky by taking what turned out to be the match-winning penalty as Arsenal Legends, managed by the Irishman, beat their Real Madrid counterparts 5-3 in a shooutout at the Emirates.

Lehmann, who was Arsenal’s man-of-the match in a backs-to-the-wall display, had put the Gunners on the cusp of victory by saving a spot-kick from Alfonso Perez before Rosicky was due to step up.

In true Jens style, the 48-year-old shamelessly nabbed the ball from Rosicky, who was playing at the Emirates for the first time since he left the club two years ago, before planting it in the top corner to earn the plaudits of the 40,000 crowd.

“I was one of the fitter guys so I was supposed to take one,” Lehmann explained afterwards, although his manager made clear it wasn’t supposed to be THAT particular kick.

“I was ready to kill him,” O’Leary said. “I told him I wanted Tomas Rosicky to score.

“I can’t tell you what he told Tomas Rosicky when he went up to take the ball. But he was quite adamant that he was going to take the last penalty. I was ready and waiting for him if he didn’t [score].

“But what a penalty. His only words he said to me was, ‘What was the big deal?’ And we know what Jens is like, he’s got a presence about him.”

Rosicky joked that he was willing to forgive Lehmann and not for the first time this summer. Back in July, the Invincible saved a penalty from the Czech in his own testimonial although he did later let Rosicky’s son score past him.

“Jens Lehmann stole it from me,” explained Rosicky. “I was all right with it, because I’ve known Jens for a very long time, we used to play together even in Dortmund. So I was expecting something like this.”

Given there were no goals during the 90 minutes, it’s fun that there was a bit of drama for the supporters to enjoy and it was all for a good cause; money raised from the match will go to The Arsenal Foundation and Save the Children.

As for Jens, well we may not see him again for a while. Earlier this summer he was culled from the Gunners coaching staff and seemed pretty miffed by it. Farewell, mad prince.

Arsenal board sidelined over O’Leary issue as Sanllehi influence grows

Report: Sanllehi against O’Leary board appointment

Poor Tomas, first his penalty gets saved and now this. Shame on you Lens 😀

So, it was the camera after all?

There’s a great video on arsenal twitter, David O’Leary explaining that pat rice told him to let Jens take the pk, and pat rice says ‘I told him to let the nutter take it and he’ll score no problem.’

But of course TR 7 was all class. Who doesn’t love Little Mozart

I miss them all……….we were a team then

Lehmann just saved little Mozart from his penalty being saved.

Both Arsenal through and through. Hope they stick around the club.

if i was rosicky, I would have punched him

Were any of the senior players in the stands with their families to watch? (none international playing payers of course)

Rosicky’s sexy slide tackle is capable of quenching my thirst. It’s an art in its own right. How I miss rozza.