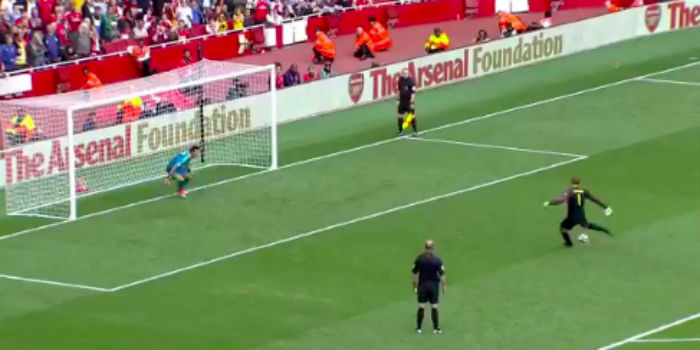 Arsenal Legends beat their Real Madrid counterparts 5-3 on penalties as Jens Lehmann capped a man-of-the-match performance saving and scoring in the shootout after the game ended 0-0 after 90 minutes. An estimated 40,000 enjoyed the action at the Emirates, which was organised to raise funds for The Arsenal Foundation and Save The Children.

Jens, a late replacement for David Seaman who pulled up with a calf injury in the warm-up, was by far the busier keeper all afternoon. And he seemed to enjoy it that way.

As some of you will remember, the German made an unbelievable stop to deny Raul when the two met in the Champions League knockout stages at Highbury in 2006 and he rolled back the years to repeatedly frustrate the Madrid striker and his partner Ruben de la Red.

The Gunners, who lost a corresponding fixture 2-1 earlier in the summer, were on the backfoot for much of the first half but they did have a couple of chances to break the deadlock before the break.

First, Gilberto, fed by Jeremie Aliadiere, saw a volley blocked for a corner and from the resulting set-piece Davor Suker, carrying more than a few pounds, had a looping header cleared off the line.

The comparatively youthful Aliadiere was by far the Gunners best outlet throughout the game. One burst down the right in the second half led to a chance for Rosicky who flashed wide and a later show of pace ended with a decent strike that was parried away by keeper Pedro Contreras.

The occasional break by the Frenchman aside, Arsenal were mostly penned in by the visitors who looked fitter and, with Claude Makelele anchoring their midfield, more organised and technically astute.

Once again, @jenslehmann is our penalty shoot out hero ? pic.twitter.com/twQeDnAg2e

As old legs waned, manager David O’Leary rang the changes treating the crowd to cameos from Perry Groves, Stephan Schwarz and Anders Limpar. They were all given rousing cheers by the crowd, as was Rosicky who earned a standing ovation when he was subbed off.

Alberto Rivera tested Lehmann at the start and end of the second period, but the Invincible was not to be denied his chance to shine in a shootout.

Not only did he save Alfonso Perez’s effort, but after Pires, Grimandi, Upson and Aliadiere all netted for the Gunners he took it upon himself to win the game. Rosicky had been due to step up but Jens dismissed him, put the ball down and smashed it into the top corner. Classic Jens.

The crowd loved it.

Rosicky not happy though. ?

Lehmann. One of the only guys I have ever seen red carded for punching his own teammate!.

Mike Dean fuming that someone took the spotlight away from him. Surprised Lehman didn’t get booked

I really enjoyed the match, it was classic, i can’t stop wondering what the outcome would be if we had god, TH14, Vieira and Ljunberg playing for us. Nice stop from Jens, he was really sharp in goal. It’s good to finally end the Madrid Legends unbeaten run.

Putting Arsenal aside: it is really nice to see de la Red playing football again. Does this mean his heart condition is fixed?

So Aliadiere is a legend?

Everyone who played yesterday, and raised lots of money for charity is a legend, and Jeremie Aliadiere played really well, so yes. Do you ever manage to do or say anything nice Fats?