INJURY CONCERNS WITH DUTCH CONTINGENT
Things have been a little quiet around the club this week with the international break, but plenty of the players have been kept busy with their countries. Dominique Bloodworth and Danielle van de Donk played the full 90 minutes for the Netherlands in their 2-0 World Cup qualifying playoff first leg victory against Denmark.

Over 15,000 turned out to watch the European champions take a step towards World Cup qualification. Gunners keeper Sari van Veenendaal was on the bench due to a lack of match fitness. Sari took a knock during pre-season, which is why Pauline Peyraud-Magnin has been starting in goal. Coach Sarina Wiegman explained that Sari was fit enough to start, but too lacking in match fitness.

She did not expand on Miedema’s fitness issue, though it’s not thought to be a huge concern. I’m told that she just took a bit of a whack on the shin in training. Arsenal will look on with interest at how Wiegman lines her team up for the second leg in Denmark on Tuesday evening.

⚽️ @VivianneMiedema has had the most touches in the opposition’s penalty area this season (34) #FAWSLStats pic.twitter.com/TECtPtpcPk

INTERNATIONAL ROUND-UP
Lia Wälti was also involved in a World Cup qualification playoff on Friday evening, playing 90 minutes of Switzerland’s 2-2 draw with Belgium in Heverlee. The second leg takes place in Biel on Tuesday evening. Meanwhile, Jordan Nobbs played 70 minutes of England’s 1-0 friendly victory over Brazil at Notts County’s Meadow Lane on Saturday, Beth Mead played the final half an hour as a substitute. Leah Williamson was an unused sub.

The Lionesses have another friendly against Australia at Craven Cottage on Tuesday evening. Pauline Peyraud-Magnin was an unused sub for France in their 2-0 win over Australia on Friday and remains part of the squad for Tuesday’s match against Cameroon. Louise Quinn and Katie McCabe will play for Ireland in their friendly against Poland in Ostroda. Jess Samuelsson was spared for Sweden’s friendlies against Norway and Italy as she has only just returned from a long term foot injury.

CHELSEA V ARSENAL ON BT SPORT 2
Arsenal will undergo their first big examination of the WSL season on Sunday as they face last season’s double winners Chelsea at Kingsmeadow. Chelsea started the season slowly, but a 2-0 win over Brighton last week has kicked their season off in earnest. This game will go a long way to illustrating the Gunners’ title credentials.

The match will be shown live on BT Sport 2 at 2pm on Sunday afternoon. There will be a match preview on Arseblog News on Friday and we will have exclusive player reaction on the site on Sunday evening too. It’s sure to be a tense, but exciting match. Tickets are also on sale for the next home match against Reading on Sunday, 21st October.

Pre-buy ?️ for our next home game vs @ReadingFCWomen and save £12 for a family of 4⃣!!

MONTEMURRO FINE TUNING
Gunners boss Joe Montemurro has been delighted with the 100% start to the season and says he thinks he has the foundations in place for the way he wants his team to play. In an interview with Arsenal.com, the Australian boss said, “I think the base is there and now we can just start to tinker little things and the fine margins. 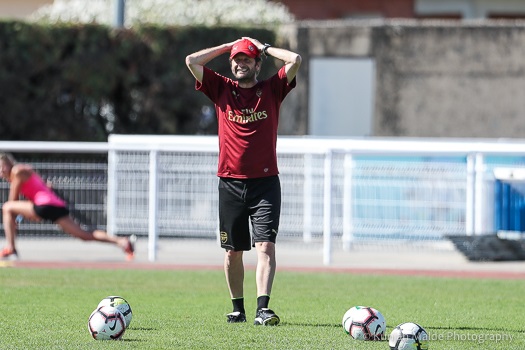 “I’m still a great believer that we will go very far in this league by what we do off the ball and how well we react off the ball than with the ball, because we’re always going to be dangerous on the ball.” Chelsea will certainly test the Gunners’ mettle off the ball. You can read the rest of that interview with Joe here.

WSL SEPTEMBER PLAYER OF THE MONTH
Kim Little and Vivianne Miedema were both nominated for the WSL Player of the Month award for September, but lost out to Bristol City goalkeeper Sophie Baggaley for her fine performances in a 0-0 draw with Chelsea and a 2-2 draw with Manchester City this month. I suspect the presence of two Arsenal players ‘split the vote’ somewhat, as the final vote was decided by twitter poll.

OVER THE HILLS AND FARA WAY
Finally I would point you towards this excellent interview with former Gunners midfielder Fara Williams by Rich Laverty. Fara signed for Arsenal from Liverpool to much fanfare in 2015- but in truth, the move never really worked out and Williams moved to Reading last season.

Fara opened up on difficult personal issues that blighted her spell at the Gunners, “I had a bad time at Arsenal both on and off the pitch in my personal life. It wasn’t a place I wanted to be in, I’d moved away from home [Liverpool] and broken up with my partner which affected my football and my state of mind and I probably didn’t know how to manage that well enough.

“I got married and we broke up within weeks of getting married and I tried to hide that from people. I was married in December and moved to Arsenal in January without my partner. Nobody knew that, I didn’t tell my teammates until September/October time that I had a problem.” The interview is well worth a read.

Previous articleFeedback request for Arseblog apps + some site news
Next articleThe Unai Emery revolution: how the Spaniard has changed Arsenal

Thanks for the extra reading/interviews, outside of our club. Chelsea next, COYG!

You guys know when Viki Schnaderbeck will be available again and how the injury process is going?

She’s still on course for December, I think maybe after the Christmas break we’ll see her.

Well, that sucks obv! Thanks for the information and of course your regular coverage! Great work, appreciate!