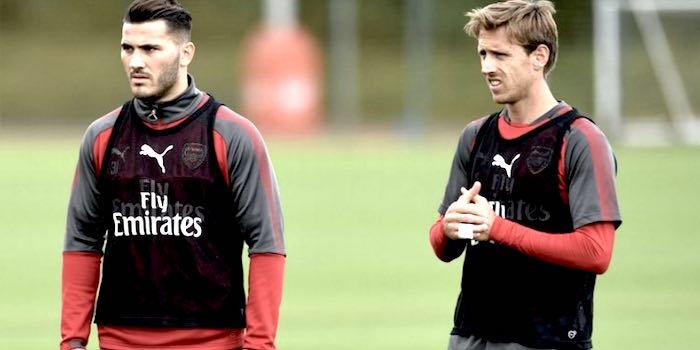 Having missed out on Monday night’s 3-1 win over Leicester at the Emirates, both Nacho Monreal and Sead Kolasinac are doubts for Thursday night’s Europa League clash with Sporting Club in Lisbon.

Arsenal were forced to use veteran right-back Stephan Lichtsteiner at left-back, but he tired during the second and was replaced there by Granit Xhaka for the final 30 minutes.

The latest medical team update from the club suggests both our established left-backs continue to be assessed, casting doubt on their potential availability.

It will give Unai Emery something to think about if they can’t play, and Arsenal may want to exercise some caution with a busy and challenging schedule coming up.

However, there was some good news as both Sokratis Papastathopoulos and Petr Cech have returned to full training. The centre-half could come back in, while it remains to be seen how the coach will deal with the goalkeeping situation.

Bernd Leno has come in and performed well. Perhaps Thursday night’s team will give us a bit of clue in that regard.

If Mesut Ozil has turned a corner, Unai Emery deserves some credit for it

Who in the academy can make the step up?
I can see Julio Plez making the bench o Thursday, but who’s the next left back option? Also hoping Niles is closer to playing.

The injury update provided by the medical team also mentioned that AMN is back in full training so I expect him to play at LB for this one and hopefully Nacho or Sead could be fit for the weekend’s game. I rate AMN and hopefully he can start getting game time in his preferred position, he has a bit of senior experience from last season and I think he could make the breakthrough this year. His pace and physicality really suits Emery’s style of play and he’s pretty decent in possession too. Considering the heavy fixture list coming ahead, I… Read more »

Tolaji Bola is our next left back option from the academy. He was training with the first team during the interlull, so hopefully Emery will select him (at least as a backup) for the midweek trip. It would be a good learning experience for our talented youngster and I hope he can take the opportunity to step up if it presents itself.

never mind about them, what about ozil, is he going to pull out at the last minute with a bad back or a runny nose

A very strange life, that if an internet troll.

There is literally nothing to be negative about, so you have no excuse mate. For all we know, Ozil may have been dropped for these games for tactical reasons or something else, but the manager may have been trying to keep the issue in house and claimed he was injured.

Just as Wenger used to with players that were coming to the end of their contract. Either way, Ozil seems like he may have turned the corner, and until he proves otherwise, I fully back him and this team.

You’re talking too much sense, stop!

Everyone knows pulling out doesn’t work

Dude, seriously; you have nothing better to do with your time?

Could do worse than have Cech as back-up keeper playing in the Europa League.

Let the left backs get back to fitness, I’d rather play Xhaka again there than have them injured again.

Not sure if that’s the best idea, it was a tactical decision for the specific game to play him there for the last 30 minutes as Leicester weren’t causing damage from that side, and with 30 minutes left of the game, he could afford to sit back and not have to make bursting runs up and down that left flank.

But we literally don’t know as we’ve only seen him there for 30 minutes so who knows. Either way, I back Emery’s decisions, and trust if he doesn’t get it right, he will correct his wrong.

Read it again. Which would you prefer, Xhaka at left back or one of our usual left backs gets injured?

If they are fit enough or there is another option that’s fine.

Ainsley Maitland Niles as left back if he’s fit enough. Keep Xhaka fresh for the game against palace on Sunday.

Would be disappointed if Leno gets the boot from the league XI – he’s looked impressive. Let Cech take over the cup gloves!

Yeh I agree. He had looked excellent IMO. He had been quick if he line, agile and made some very good saves

I would whole heartedly agree…. if only I didn’t have cech in my dream team!!! There’s not much between them really, Leno has been impressive so I’d be happy to see him take over.

I agree Leno has looked really good. Tough decision for Emery as Cech did nothing to lose his position and Leno has done well. Personally I’d go with Leno until he stumbles, but either way it’s nice to have two solid options at GK.

Need a left footed player on that side the way that we’re set up. Auba or iwobi are always going to come inside, and Lichsteiner having to cut in on his right every time completely killed our attacks and especially counter attacks on a good four or five occasions on Monday. Is Medley an option?

Keep Cech on the bench pls…

Maybe we’ll get to see the 3-4-3 formation again, with Lichstenier as one of the CBs? Also Bellerin needs a rest surely? Along with Iwobi, Xhaka and Torreira. These players have been the most involved in recent weeks (including international duty barring Bellerin). Looking forward to ESR, AMN (if fit), and Nketiah getting starts, although the latter strangely didn’t even feature in our Qarabag lineup last time in Europe…is Emery unimpressed by him? Also some of the squad players should be getting starts, the likes of Elneny, Ramsey, and Guendouzi (who was amazing against Leicester)…I’m actually really looking forward to… Read more »

Wasn’t Welbeck playing left back in training in pre-season? ?

We have Monreal, Kolasinac and AMN and still have an issue at LBACK. Typical A4senal.

OTOH Lichsteiner is available and if not Granit!

Some good work from Xhaka in tandem with Torreira. But was sitting bricks when he went to LBack!

On that note 3veryone’s favorite other scapegoat Mustafi did well last match. No errand hand which had it been him there would have been a chorus of criticism.

Instead 5 , yes 5 punts from deep in defense to find runners in attack, Lacazette, Iwobi a couple of others