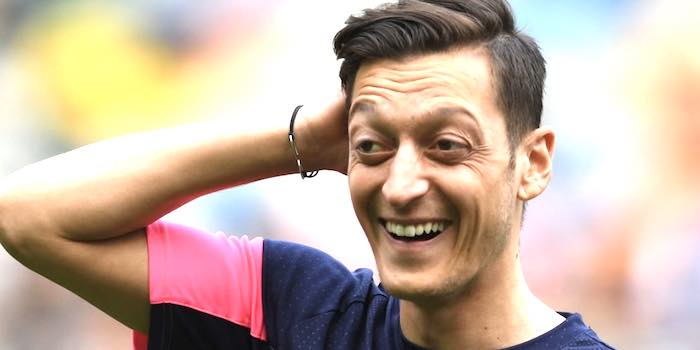 Mesut Ozil says he doesn’t pay any attention to critics of his playing style, in particular those who accuse him of being lazy and lacking fight.

The German spoke to former Arsenal Women player Alex Scott for Sky Sports ahead of Sunday’s Premier League clash with Crystal Palace, having put in a man of the match performance in our 3-1 win over Leicester on Monday night.

The 30 year old’s body language is often a stick with which to beat him, but he insists that people who focus on that are an irrelevance to him.

“I just laugh,” he said when asked about that kind of criticism. “I am not the youngest anymore but I started with 16 or 17 to play professional football. It always was like that – up and downs – the people either like me or doesn’t like me.

“I don’t listen to them. Of course, if I play bad I know that, if I play good I know that as well. The most important thing is that the coach can help me – if I make mistakes he can tell me, then we can speak and I can do it better in the next games.

“But if people just say bad things about me because they want to be in the newspaper – I know that and I don’t care about them.”

Ozil, an influential part of Germany’s World Cup winning side in 2014, also spoke about his ambitions to win more with Arsenal over the coming years.

“I always have motivation, particularly before the games – I want to win all the games and I hate to lose, even in training I am pissed and aggressive because I always want to win.

“I have said before the main thing is to achieve more than we have over the last few years and I think we have the potential to win something with the team. Hopefully at the end of the season we will win some trophies.”

Check out the brand new Arsecast on the 1-0 win over Sporting, Reiss Nelson’s loan, Stan Kroenke, and much more

Good lad. More going on underneath than we give him credit for.

Honestly, despite the criticism that others give him, he is my favourite Arsenal player.

My favourite too, I love this guy!

I love him too. But you may have guessed that from my moniker.

bravo mesut. You remain one of the best players in the world.

Well done, Mesut; excellent response. Özil = wonderful player and good guy. Now I need to learn to also laugh at the idiots, rather than get angry!

One of the best “pure” #10 of the game IMHO. But I gotta say that a player of his caliber needs to put MOTM performances week-in, week-out.

I have always wanted to write this about Ozil. I thought this might be a good time after the Leicester game as people might give it a read.. It is hard for people to understand the way Ozil plays to be honest. People in this league love players like Milner but not Ozil. Milner is a very decent player.. I don’t want to be biased in any way. Every time you look at Ozil.. he will be walking around, might look lazy to people but actually reading the game.. getting the opposite team players marking him confused.. and getting them… Read more »

My competitive sport was rugby, a few years ago now. But we had 2 geniuses playing the game in my era. Dean Richards, and ZinZan. You wouldn’t see them fighting in the close exchanges, they’d be wandering off to where the ball was about to be. Delano was regularly lambasted for his laziness. How much better he could be if he was like the Milner of rugby, Wrong. Like you say.
Ozil is performing better as part of this new team . Brilliant. Sky’s the Limit
Boom

Per Mertesacker recently pointed out how Ozil had won the World Cup, among other things, “always with the same body language.”

I wish we all had a (pick your denomination) for all the times we have heard the “negative body language” line. We would all be rich. Believe that Ozil has a perfection streak in his game, and is pretty driven to succeed.

Lets be frank, He does have negative body language at times, ie a language that doesnt project the never surrender spirit you want in combative sports. Make no mistake, I am very much an özil type of player myself, I genuinly and modestly understand his passion and game style. But I am also one to instill spirit in my team mates, here I outperform özil, which either makes me a world class captain or questions özils sense of responsibility to drive the team in games. Off the pitch I have no doubt he does it , you dont become özil… Read more »

We need a pact winger….left footed or right footed.. But at the moment I would take a left footed

Iwobi alone is not good enough bc one injury and we are in trouble.

Absolutely, we need to release Bellerin on the right more and we need corresponding threat from BOTH flanks. Even with Auba in the mix as a striker coming from left, we will need variation.

Ozil you remand will always be my favorite player.

I see he’s been tackling more. That’s the mesut we like. He must play behind the strikerS + 1 other who can roam between flanks.. like iwobi. He needs a solid CM backing defensively to make it work.

I remember a period where it felt like in attack he’d exclusively give the ball to Sanchez (who must at least be able to analyse the game better from where he’s sitting) cuz he felt he be the only one to force something for us. And he was prob not wrong tbh no disrespect to Olli G. I don’t know, it just feels like he’s found several players now on same wavelength in attack instead of that 1 player.

A Different George
Reply to  IamsterdamGooner

And Sanchez, pretty clearly, was always looking for Ozil.

Jijo
Reply to  A Different George

He still is.. I think..looking for ozil..

He’s not the player that will dig the team out of a rut when they are playing poorly. It’s his natural temperement.

Its not the attacking ability that is in question.

Even defensively, he puts in the leg work.

IF he can improve this by 25%, we will have an even more effective player and to the benefit of the team as a whole.

Particularly in the big games, this is necessary.

I see genuine signs of the real madrid özil. He is at his best when teammates left to right penetrate final 3rd, utilizing excellent awareness, vision and that world class passing of his to release them in clear on goal positions. I am not convinced of his mental strenght to dig deep in games where it doesnt click, but maybe with emery way of playing it will click much more often.

Pissed and aggressive in training? Sounds like our early 90s players!