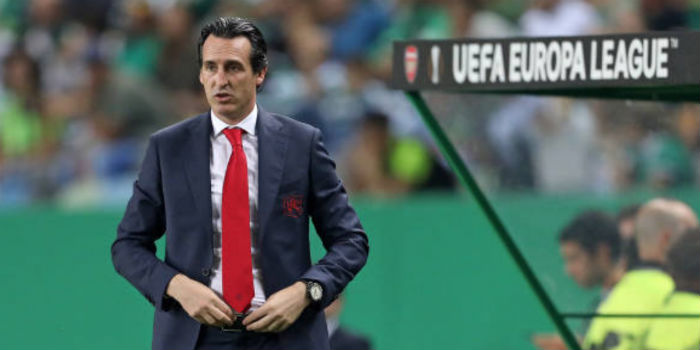 Unai Emery was thankful for the support of Arsenal’s travelling fans as his side stretched their winning run to 11 games with a 1-0 victory against Sporting Lisbon.

Danny Welbeck’s strike 13 minutes from time was enough to seal the points in the Portuguese capital and means the Gunners are within touching distance of the knockout stages of the Europa League.

If the Gunners happen to win their next three games, against Crystal Palace and Liverpool in the league and Blackpool in the Carabao Cup, we’ll have the chance to break the club’s record for consecutive victories – one that has stood since 1987 – when the Portuguese visit in November.

As Emery noted when the scenario was put to him, that’s a long way off; instead, he hinted it’s better to enjoy what’s already been achieved.

“Three matches… that’s a lot of matches,” Emery said. “We are only thinking of the next match against Crystal Palace. We are also enjoying each moment with our supporters.

“Today we were with them and they were with us, supporters who had come from Arsenal, from London or from here. For us, it’s very important that supporters are with us and enjoy it. I’m enjoying continuing the work, our process.

“They have a high demand for us because every match is not easy for us. Historically, this has been very difficult for us and I know this. We are thinking about three points at Crystal Palace but we know that it’s very difficult to win there. For us, continuing to win is what we want but we know it’s not easy and we can lose.

“We’re only thinking about the best performance for us. We want to continue winning and we also want to continue to improve things. Each match is a big opportunity for every player to show us they can take big responsibility with this personality to play like we want. We need every player.”

Keep winning and we’ll all be enjoying life.

Keep playing sexy football and we’ll all be enjoying life ?

We are enjoying your games too. COYG!

Emery I will watch out for your tactical decisions against Liverpool….man city and Chelsea defeats were forgivable because the players haven’t understood your tactics….but against Liverpool there would be no place for you to hide Emery.. .my eyes will be on you in that match..but as for now we would take it game by game

Well that’s obviously not taking it game by game then.

This comment is a) from Google translate, b) translated by the authors or c), just creepy for the sake of being creepy.

Or d) Written by Paul Merson.

What’s the weather like in Moscow? Have you kept your taxi receipts?

We are very slow ‘getting out of the blocks’. The likes of Liverpool will offer no mercy! It will be all over.

what I love about him, is he can enjoy a win, but his main focus always appears to be on how the team can do better, he sees a win and thinks, but how can we win in a better way next time