Qarabag 0-3 Arsenal: By the numbers

Eight – The number of wins Arsenal have won in a row.

That is the most important stat right now even if you can find things to worry about in the performances.

Arsenal aren’t exactly lighting the world on fire with their form but they are finding ways to emerge as the winning team. Like so many of the latest matches, there were stretches tonight were it is obvious that Arsenal are still a work in progress in delivering on Unai Emery’s plan. In this match however, Arsenal were clinical with their chances and Bernd Leno made some good saves to keep the teams third consecutive clean sheet.

Qarabag 0-3 Arsenal: By the graphs 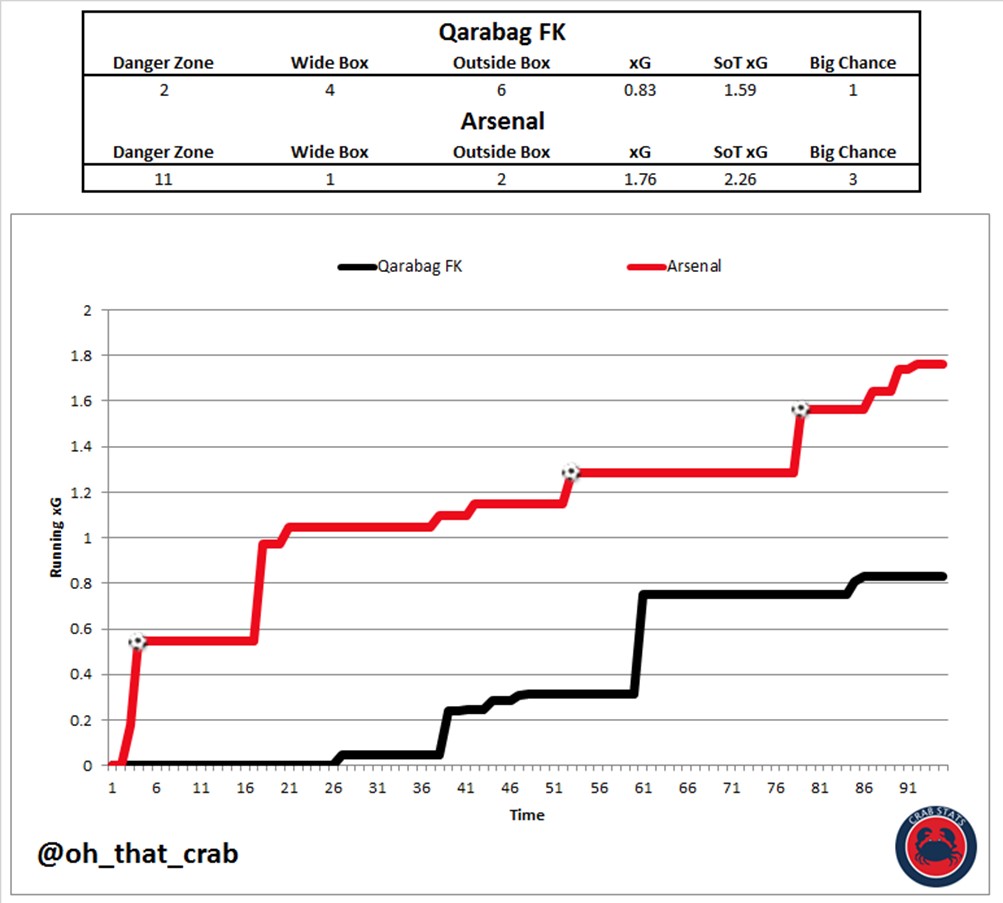 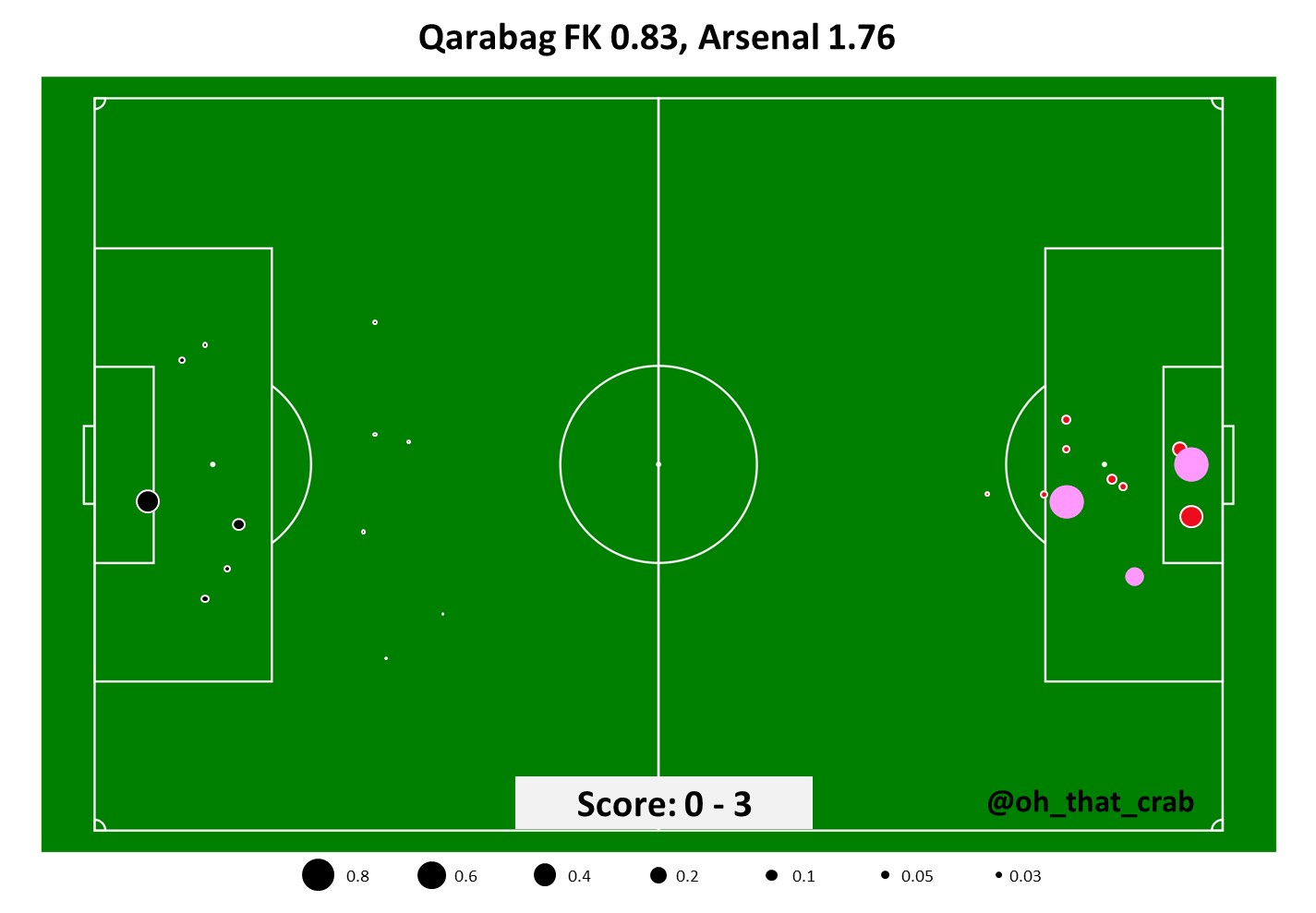 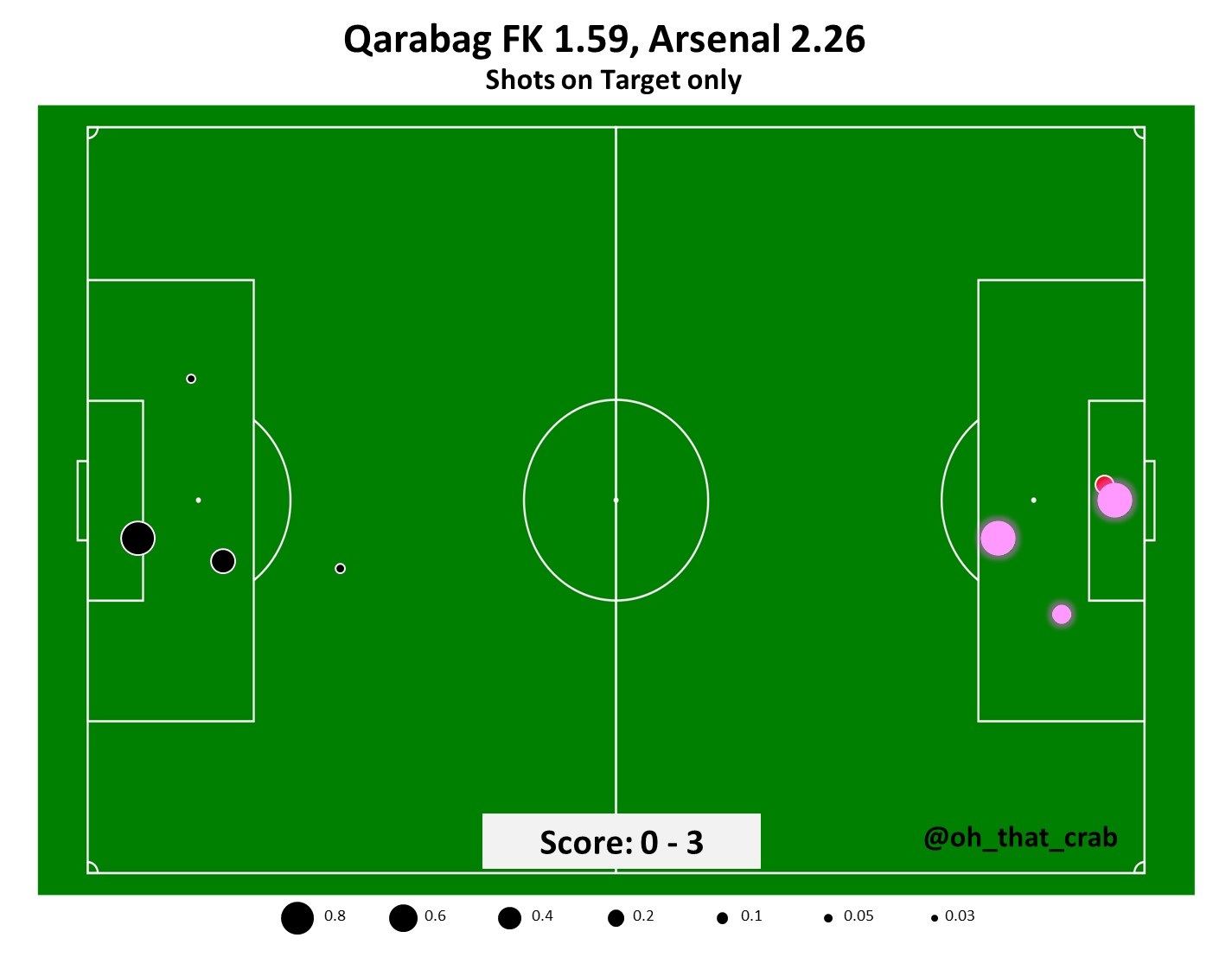 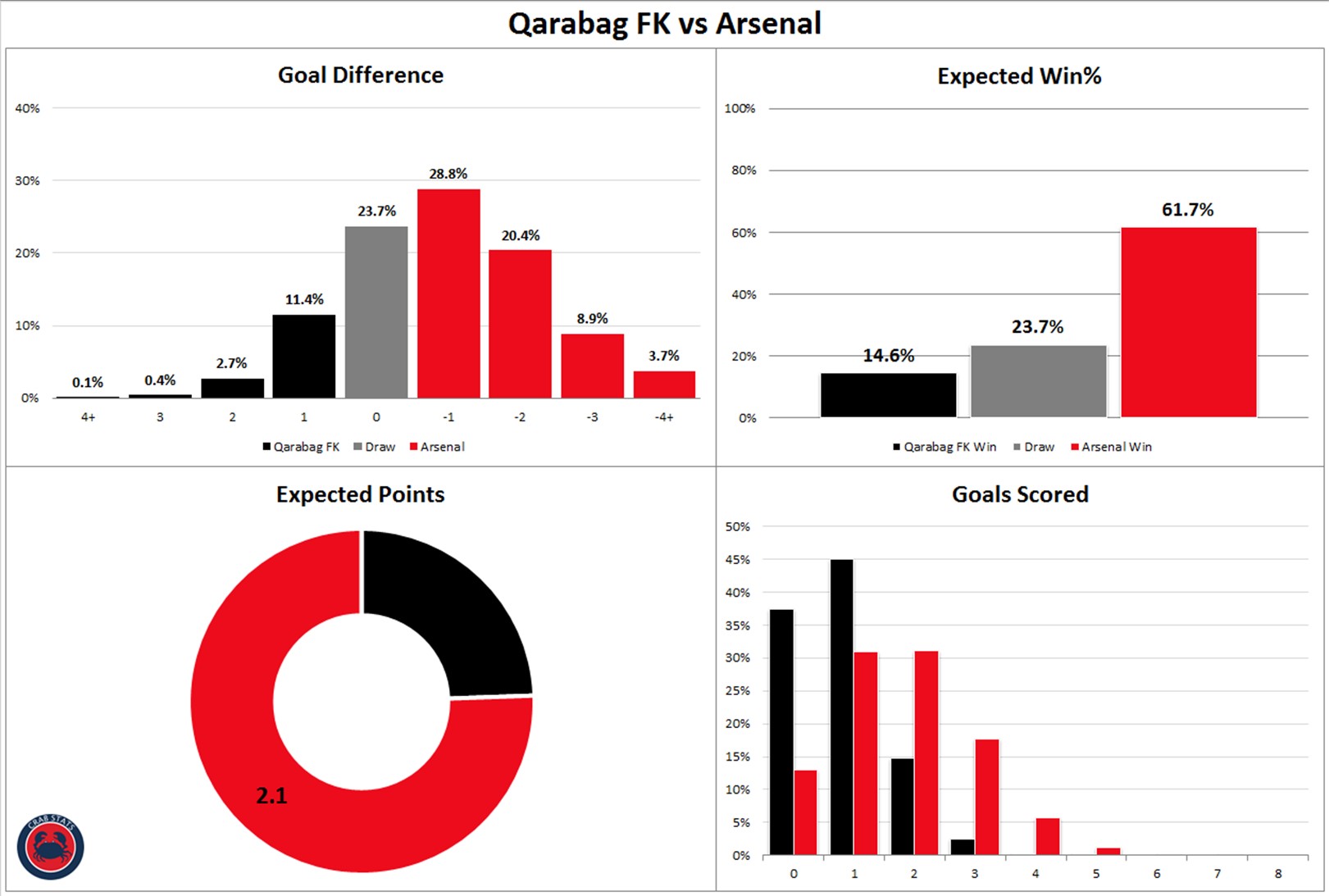 Qarabag 0-3 Arsenal: By the numbers

1st – Sokratis got his first goal with Arsenal!

1st – Matteo Guendouzi got his first senior goal with Arsenal!

Lot’s of first Arsenal goals tonight! All three got their first goals for the club, with Guendouzi and Smith Rowe both getting their first ever senior goals. Arsenal now have 12 different goal scorers on the season (not counting own goals). Congratulations all around and hopefully the first of many to come.

Alex Iwobi makes his case for a start

4 – Successful dribbles (tied for most) of 8 attempted

Iwobi nutmegs their captain and pushes him over #AFC pic.twitter.com/6XLVF2brRR

Alex Iwobi has looked good every time that he has played for Arsenal and I think that his form has him on the doorstep of deserving a starting role. Iwobi seems to be performing well under Unai Emery, this is what he said about the new boss earlier in the week:

“I’m more positive and more confident with the ball,” Iwobi said. “The boss has basically told me that if something doesn’t work, just keep going and don’t dwell on it.

“He’s told me to stop being so critical and to just keep trying no matter what happens, no matter if things don’t go as I want them to.

It might be a tough turnaround to play on Sunday after a long trip back to London but he really should be in the mix after the international break.

Arsenal give up chances… again

23 – Touches in the box for Qarabag. That is 5% of Qarabag’s total touches in the match happening in Arsenal’s box and the same as what Arsenal were able to do (28 total for Arsenal).

1 – Big Chance created (saved by Leno). Overall Qarabag created just 1 big chance in this match but for me that had a number of very dangerous situations that made me nervous.

This match was one where I think xG misses things that happen in the match. Qarabag had dangerous attacks but ended up shooting from wide areas and outside the box. Looking at my offense value added model (which is a kind of an all encompassing offensive rating system) this match was much closer than the scoreline and the xG suggested. Thankfully Arsenal had the better finishers, and were able to turn their dangerous possessions into dangerous shots were Qarabag couldn’t punish Arsenal. 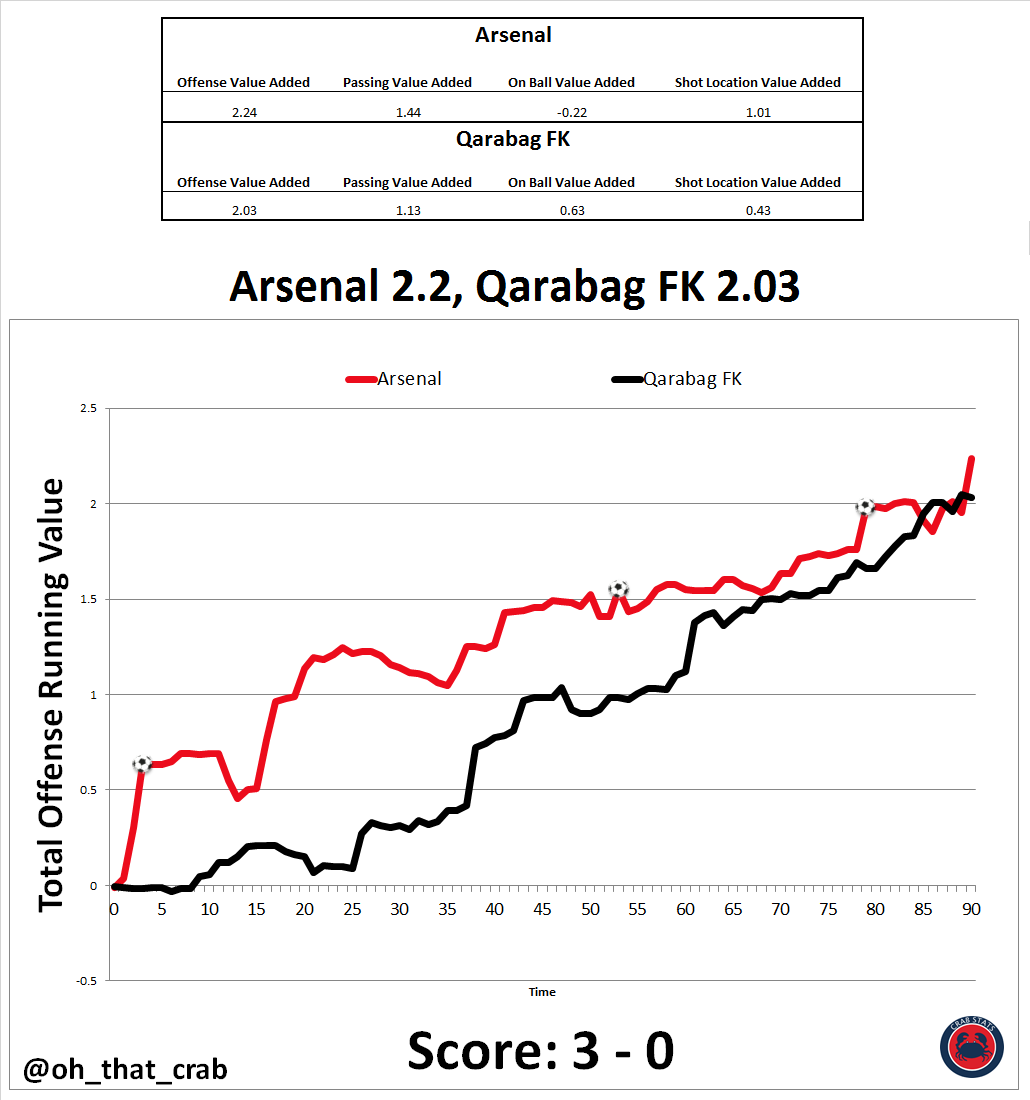 To end on a happy note, Iwobi’s dazzling footwork

Loved this from Iwobi pic.twitter.com/BGj1j3tzdQ

Sources: whoscored, opta, my own database

I’m not Iwobi’s biggest fan, but based on form, it’s hard to justify Rambo starting ahead of Iwobi on Sunday.

And that is if he is even available. Twins is especially disruptive

No wonder negotiations were so strained – it must be difficult to bring up twins on just £150k per week. Double the extra nappies must worth easily another £100k.

So arsenal are scoring more often than you would expect from the positions they get into and preventing more goals against them. Maybe that’s not a cause for concern but simply a sign that our strikers are really good?

Sorry, I strikers and goalkeepers

Frankly it’s also a sign that we’ve been facing weaker opposition. Hopefully the trend will be more favourable by the time we meet Liverpool.

I agree with this mostly, we’ve outclassed these teams on an individual basis. Calm finishing and good decision making on our attacking 4 where as the opponents really aren’t able to convert the chances that the team is making.

that’s possible – sometimes teams outperform these expected numbers because of an actual real-world reason and it’s sustainable. most of the time though it’s just variance/luck and will regress to the mean. that’s where the eye test comes in, and to me the eye test does not suggest that we are playing brilliantly and as such i suspect the overperformance is due to luck/variance. i’ll take it, though.

So far so good. Sterner tests lie ahead.Fulham wont an easy game as are
all epl matches which make it more exciting compared to the Spanish/German/French and Italian league.
Then you have Salah and pals waiting.The defence must improve or they could be
ripped apart, But I am more confident that the gunners could give the reds
a fight and could even beat them.
COYG

Makes one wonder how we kept losing last season.

Do you mind explaining the graphs? I can’t quite understand the concept each time I look at it.