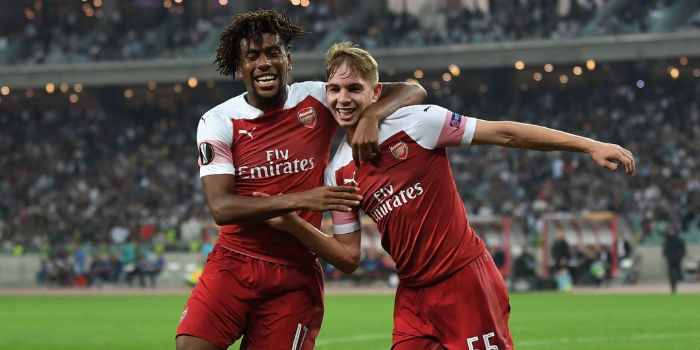 Emile Smith Rowe must be pinching himself today.

He’s only 18-years-old and after years working his way through Arsenal’s Academy ranks, he’s scored for the first team, earned plaudits from his coach and been plastered on the back pages of the national press.

It’s a lot to take in and in turn heaps on the pressure. With expectations raised, every performance from now on will be under the microscope. On the plus side, the midfielder is enjoying his football and says he’s buoyed by the encouragement of the club’s established pros including Mesut Ozil, a guy who broke through the ranks at Schalke at a similar age.

“I feel delighted,” he told Arsenal.com after the 3-0 win against Qarabag.

“Obviously it is something I’ve dreamed of since I was a kid, scoring my first goal for the club. I scored in pre-season but last night it felt so different and I am just so happy.

“I am really enjoying it. I was enjoying it before but I am getting chances and I am so grateful that the gaffer has got faith in me. I just want to keep improving and keep getting minutes.”

Judging by the words of those who’ve spent time with him, he’s a humble kid; an introvert in a world of big personalities. It’s something that Emery touched on last night when asked what most impressed him about the teenager.

The respect between coach and player certainly seems to be mutual.

“Unai has been a real big help to me personally because he is always talking to me after training,” added Smith Rowe.

“And as a team, he is always telling us, having a lot of meetings after training and even before matches. I think it’s really good for the team.

“[Fighting for a place] was a chance I took and I am happy I have taken it because now he is really happy with me, he helps me a lot and to get the chances I am getting now is crazy. There’s no other place I’d rather be.

“When I first started training with them the team, players like Welbeck, Lacazette were so welcoming. Everyone is helping me, everyone is giving me advice and I couldn’t really mention anyone now because everyone has been so welcoming. It is like a big family.

“Every player has told me you’ve got so much ability, so much quality just keep focused and keep working hard. To get that off world class players – even Mesut Ozil has told me that before and Aubameyang as well – is just unbelievable.”

Amazingly, Smith Rowe has not actually been in the Arsenal first team dressing room at London Colney. While he may have made appearances in the Europa League and Carabao Cup competitions he’s still deemed a member of Freddie Ljungberg’s under-23s who have their own area.

“I change separately, find out about ten minutes before [training starts], just run over and train,” Smith Rowe he told The Times (£).

“I am not actually in the changing room at the training ground. I haven’t actually properly seen the room. It’s not far away but we don’t really go around there, we are not really allowed in that building.

“I train every day with them [the first team] so it is good. But when I come to games, I look around and can’t believe I’m here. It is still surreal.”

I reckon he will end up as a top top player for us (fingers crossed no injuries etc).

Good attitude, also plays with confidence, also each moment is important for his growth, also Emery is not burning him with bigger responsibilities which is good.
We want to see him continue improving, and also develop his goal scoring abilities. We sure need wingers who can win us games also.

I wonder now if this is enough to convince people that there is no such thing as an internationally unified “body language”.

Interesting insight into the way things work behind the scenes. Here’s to more encouraging performances going forward for future tidbits!

Great to hear he’s loving his football atm, he definitely has a huge potential & hopefully he can stay focused on improving day by day.

Also good to hear senior players encouraging young talents.
Feels like the atmosphere around the club has seriously improved. Now lets get behind the team and be that 12th player on the pitch.

He was brilliant last night. Absolutely fantastic. This is exactly what we’ve wanted to see for years, youngsters coming through the academy and given the chance to shine on the big stage. Reiss Nelson is going to have to do something equally impressive in Germany as competition next season could become fierce.

Alex Iwobi was impeccable, as well, and looks to be growing into a real force now. The shackles look like they’ve been released.

I’m loving this fusion of new homegrown and blended talent from afar.

This Sanllehi bloke seems to know what he’s doing. Instead of giving Ramsey £50M in wages over the next few years, he trusted Emery’s judgement in this kid.

Seems like a humble young lad, who doesn’t let much get to him. Values the importance of the little things too.

I’m desperate for this current crop of youngsters to make it here. Iwobi, Nelson, ESR, AMN, Nketiah, the last 3 in particular seem to have that “confident, but also keep my feet on the ground” kinda mentality.

Ozil – He is undoubtedly talented and a useful asset to have but he isn’t working too his best potential.

We can’t do too much to his temperament now. BUT he needs to be more invested when he goes into 50-50s.

Defensively, he has put in a shift before. He needs to just output a little more on this end to take the next step up and justify his wages.

Hey, how about we quit talking about his wages all the time.
He is paid big bucks to create and win games. I am not saying I don’t need more effort from him defensively but let’s cut him some slack. He has been good despite all the off field troubles.

And imagine if we had someone like Yaya or Sanchez eating away all the salary and for that, I am more than ok having Ozil around.

Smith Rowe looks bags of potential BUT all this detracts from the real star yesterday which was Iwobi who continues to deliver for us something different. We lack the sort of instigator /wie player at the moment and Iwobi provided that. 1) He was a useful outlet for our defense to pass out to as he had the pace and tekkers to carry the ball out from defense on his own without fullback support. 2) He has the trickery in wide areas to stretch play. Clearly more effective when we went back to a back 4 and he gobbled up… Read more »

Green for Khabib! Red for Connor !

Not really on topic but since you asked…
Conor is a great fighter all round, he really really is! I just wish he was more humble man he talks too much sometimes. I hope Khabib teach him a lesson! I just like humility in fame and money, not this show off poser stuff. So yeah, hope for a great fight with Khabib out on top.
Just my 2 cents…

Could it be the emergence of ESR that Arsenal have supposedly withdrawn Aaron Ramsey’s contract offer ?

Well it looks fairly straightforward to understand now, doesn’t it?
I wouldn’t begrudge Ramsey because he is a true hard worker and doesn’t hide but he was a misfit in our system.
His all action style might suit Liverpool, an upgrade on Henderson maybe.

So good luck to him when he leaves, but I won’t be too disappointed to see him leave especially with AMN , ESR and Matteo around.

Ramsey is a different player from Henderson. They have diffenet job. No way Klopp going to put Ramsey in Henderson position.

Keep going young man! All the Arsenal is willing you on. Stay humble, work hard, google David Rocastle and you’ll be on your way…

way to go bro. keep your head up.

That’s some brilliant stuff from the boy, he’s going to be a top quality for us in the future. Hope he stays around for a long long time with us. COYG

Imagine how motivated the other players in the u23 dressing room must feel seeing one of their teammates doing so well with the 1st team. They.ve got to be thinking if they work hard then they could be having some of that success too. Bodes well