THE LOWDOWN
Arsenal Women will look to maintain their 100% winning start to the season as 3rd place Birmingham City come to Meadow Park on Sunday. Arsenal thrashed Bristol City 4-0 last weekend to extend their lead at the top of the table to 3 points over Manchester City, with a game in hand.

In terms of form, Birmingham will offer the Gunners their stiffest examination of the season. Arsenal have scored 31 goals in their opening 6 games- scoring a minimum of 4 on each occasion. But the Blues have only conceded 3 in their opening 6 matches. Something is going to have to give at Meadow Park.

All 4 of Birmingham’s victories this season have been 1-0, with a 0-0 draw against Chelsea thrown in for good measure. In Vivianne Miedema, the Gunners have Europe’s in-form striker- the Dutch forward has 11 goals in the opening 6 league games. Birmingham’s Katrin Ann-Berger has saved more big chances (8) than any other goalkeeper in the WSL. Arsenal are contributing plenty of goals from elsewhere too.

TEAM NEWS
Arsenal have no new injury concerns, with Kim Little, Dan Carter, Tabea Kemme and Viki Schnaderback all out with knee injuries. Dutch goalkeeper Sari van Veenendaal was reinstated in goal against Bristol, with boss Joe Montemurro living up to his early season promise to rotate his goalkeepers.

Trying to second guess Joe’s team selections is becoming an interesting process, as the Gunners have adopted several different formations this season. They opted for 3 at the back against Reading and Bristol, but it remains to be seen how the Australian will look to break down Birmingham’s deep block.

LAST TIME OUT
A tired Gunners side stumbled to a surprise 3-0 defeat in Solihull back in April thanks to an Ellen White hat trick. But in the reverse fixture at Boreham Wood, Arsenal opened their season with a breathless 3-2 victory over the Blues. Ellen White twice put Birmingham ahead shortly before Arsenal were reduced to ten following a red card for Louise Quinn.

Lisa Evans equalised on 85 minutes, before Jodie Taylor’s injury time penalty won it for the Gunners to open their season with a victory. It would prove to be Pedro Losa’s last league victory as Gunners boss. 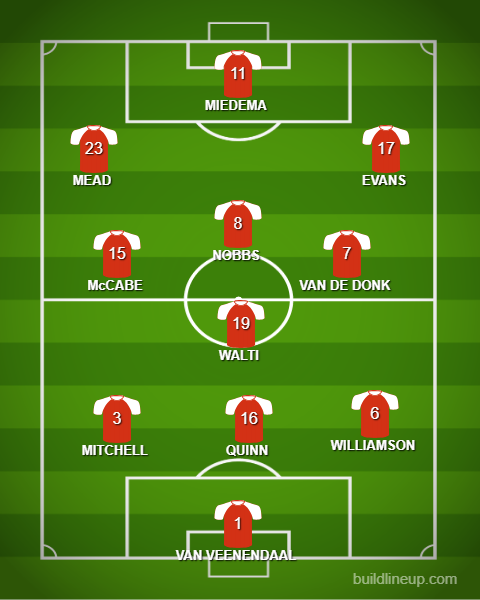 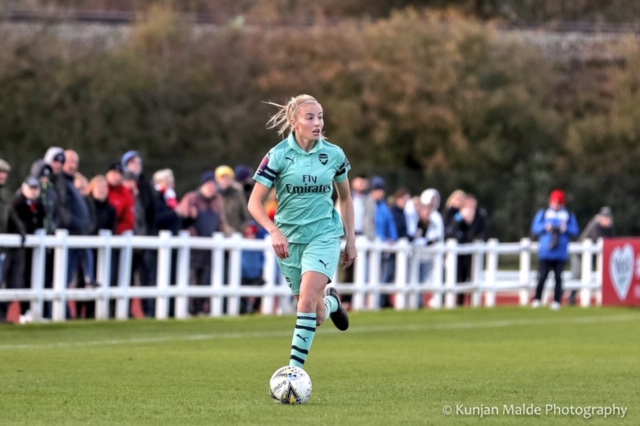 Leah Williamson’s game has gone from strength to strength since bursting onto the scene as a 17 year old. She has played as a centre half almost exclusively for the last 12 months now, after stints in midfield and even at full-back. Leah is one of the best defenders in the division and recently she has been asked to play a slightly more developed role.

As part of a back 3, Leah has hugged the right touchline to make the pitch nice and wide for the Gunners, allowing the wide forwards to tuck in and pick up the half spaces. Leah’s grounding as a midfielder means she is exceptionally comfortable on the ball, with the physique to shrug off all comers.

It was Leah’s raking pass from the right that set up Jordan Nobbs’ opener against Bristol last weekend. Montemurro said of Leah’s performance in Bristol “Leah’s really adapting to a bit more of a pro-active defending methodology. She’s got a bit of freedom to go forward and I’m really enjoying working with her. She’s getting the rewards for the amazing work that she’s put in over pre-season and the season so far, so all credit to her.”

The @ArsenalWFC star puts her side 1-0 up at @bristolcitywfc!#FAWSL pic.twitter.com/niBdhmJ1L1

HOW TO CATCH THE GAME
The game is being screened live on BBC Online and on the red button. It kicks off at 12.30pm at Meadow Park. If you want to go, tickets are available on the turnstiles at £10 for adults and £5 concessions.

COMING UP
We’ll have exclusive reaction from a player on the site on Sunday evening, as well as the usual Arsenal Women’s Weekly Round-Up on the site on Monday, where we will announce the winner of the signed teamsheet from last year’s Conti Cup Final. Our November feature interview will focus on a week in the life of an AWFC player and the progress made in terms of nutrition, strength and conditioning and analysis over the last 5 years or so.

Previous articleEmery: Liverpool game a very important test
Next articleEmery planning to play players at full back even if they’re not full backs

Very excited but also quite nervous. I reassure myself by remembering that BSWFC shipped 3 goals to City, so they are not impregnable. And of course we spanked Chelsea, whose defensive record was similarly strong.
This could be a slog, but if we show up and we concentrate, we will win.
Good luck to the girls, especially Louise Quinn, if she starts. This is her kind of game.

And thanks for the preview, Tim.