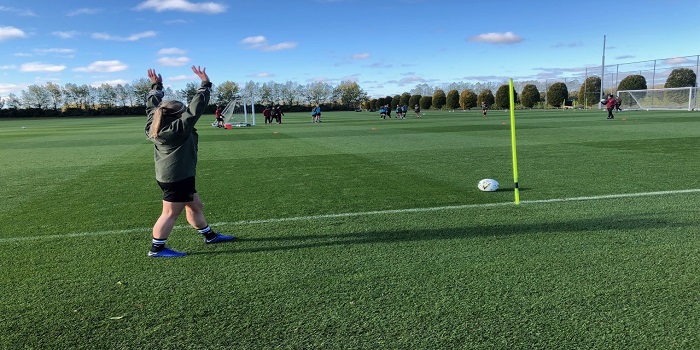 THE BEAT GOES ON IN BRISTOL
Arsenal Women thrashed Bristol City 4-0 at Stoke Gifford on Sunday afternoon, with two more goals from Vivianne Miedema, one for Jordan Nobbs and a last gasp strike from Danielle van de Donk. The win means the Gunners have scored a minimum of four goals in all 6 of their WSL games so far this season.

? Movement at both ends of the table, and @ArsenalWFC still the team to beat…

? Don't forget, you can watch all the highlights on the BBC Women's Football Show, from 11:30pm or on iPlayer! #FAWSL pic.twitter.com/vet09jr70Z

The win puts the Gunners 3 points clear of Manchester City at the top of the table, with a game in hand. City surprisingly dropped 2 points at home to Reading on Friday evening. Arsenal play at home to third place Birmingham City on Sunday at 1230pm, the match will be screened live on BBC Online and on the red button.

Arsenal Women extended their ?% start as Vivianne Miedema’s double and goals from Jordan Nobbs and Danielle Van de Donk gave them the win over Bristol City ?

Posted by The FA Women's Super League on Monday, 29 October 2018

‘WE CAN NEVER STOP’ DECLARES MONTEMURRO
After the victory manager Joe Montemurro was delighted with the two late goals to add some sheen to the score line after a dominant performance. “If we want to be the best, then we have to keep playing for 90 minutes,” Joe told Arsenal.com.

“We can never stop and I think the work we’ve done over pre-season is showing in our games and the way that we play them out. We’re finishing teams off, which is very important, and all these goals and every moment will count at the end of the season we need to take advantage while we’re in control.”

ARSENAL ON THE BEEB….AGAIN….
Arsenal’s match away at Everton Ladies on Sunday, 18th November (which is during the international break for the men) will now kickoff at 1230pm and be shown live on BBC Online and the red button. It’s a good job some of us didn’t already book train tickets that see us arrive into Southport at 1229pm….

INTERNATIONALS
Beth Mead, Leah Williamson and Jordan Nobbs have been selected for England Lionesses friendly against Sweden at Rotherham United on Sunday, 11th November. Jess Samuelsson has also been called for Sweden for the first time since an agonising foot injury obtained playing for her country a year ago.

?? Congratulations to Jessica Samuelsson, who's back in the Sweden National Team ?

She'll have the opportunity to face our @Lionesses on November 11 ?#WeAreTheArsenal ? pic.twitter.com/VwUIdrWtk8

I thoroughly recommend this interview with Arsenal forward Danielle Carter, who is also a contributor to the FA’s Inclusion Advisory Board. The Telegraph’s Katie Whyatt talks to Dan about white privilege and equal opportunities in football, it’s well worth a read.

COMPETITION TIME!
We’re giving you the chance to win this teamsheet from last season’s Conti Cup Final victory over Manchester City last season. It is signed by the current squad, including manager Joe Montemurro and match winner on that evening Vivianne Miedema. 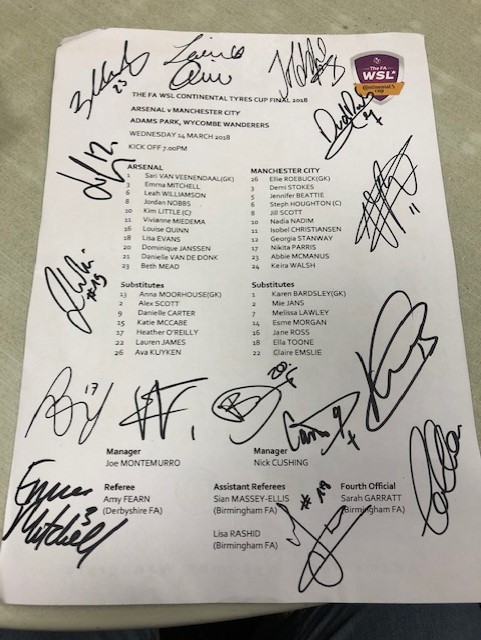 To be in with a chance of winning, simply send your answers to the following question to [email protected]; from which club did Arsenal sign Vivianne Miedema? The deadline for entries is 11pm on Friday evening (UK time) and the winner will be selected at random. Good luck!

COMING UP
There will be a full match preview for Sunday’s game against Birmingham City on Friday afternoon. We will also have exclusive reaction from a player on the site on Sunday evening. Our November feature interview will give you an insight into a week in the life of an Arsenal Women’s player, so keep them peeled for that piece during next month.

Excellent result last Sunday. I know the scoreline suggests otherwise, but I thought Bristol City played very well! So I am extra-proud of our girls. We are ruthless, imperious and joyous, and I am loving every minute. No point picking out a POTM, it’s the whole team.

Good luck to everyone against Birmingham, another stern test. Hope Katie McCabe starts and scores, she deserves it.

10/10 for them all!
Miedema is surely the signing of the season. Almost another hat-trick. I wonder what the record number of hat-tricks is in a season is?

And fwiw, I don’t think there’s much to be gained by staging AWFC games at the Emirates UNLESS it’s a double bill with a men’s game. Even then, I’m not sure that being on the undercard would send the right message. By all means have a trophy parade there (fingers crossed!) but what the women’s squad need is their own dedicated stadium actually in London proper. Massive ask, I know, with the price of land and the club’s profitability being what they are.

I completely agree. I know some of the girls are unsure about playing in front of 4,000 fans when many are only semi-interested, compared to playing in front of 1500 absorbed spectators in a ground where 1500 feels a lot more. I suppose at some point, steps have to be taken to try and grow this thing, but I’m not a huge fan of the idea. Boreham Wood is not difficult to get to if people really want to go. It costs £100k for them to play there, I would rather they used the money to pay the salary of… Read more »

The AWFC management just need to do what they said they would, ie let the girls have their own independent identity and grow their profile. They could advertise the games more, take advantage of their current success and the aesthetic quality of the footie Joe is getting them to play to interest the fans at the Emirates. Should have shown the West Ham game on the concourse, for example.

That WSL table is a thing of beauty. It looks better than my most recent save on FM.