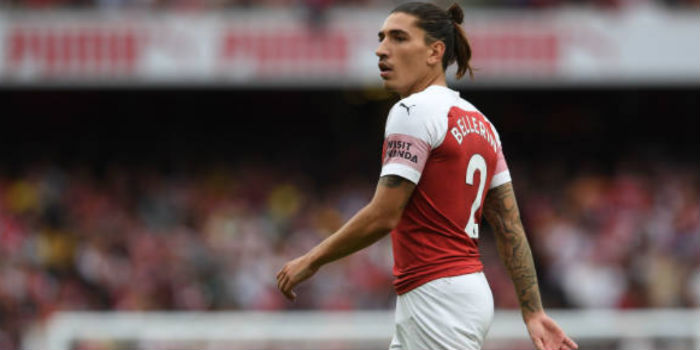 Arsenal’s medical team have released their latest squad fitness bulletin and it remains unclear who of our injured defenders will be available for this week’s matches with Blackpool and Liverpool.

Hector Bellerin, nursing a thigh problem, will definitely miss tomorrow’s Carabao Cup clash with the Tangerines; in fairness, he probably wouldn’t have been selected anyway. On the plus side, he hasn’t yet been ruled out of Saturday’s match with Jurgen Klopp’s side, which suggests it can’t be that bad an injury.

Nacho Monreal and Sead Kolasinac, both suffering from minor hamstring injuries, seem to be relatively close to a return, but again, it’s vague. Neither is ruled out of tomorrow’s game, they continue to be assessed.

Unfortunately, we have lost Mohamed Elneny, who probably would have played a part tomorrow, to a thigh injury. He won’t train for two weeks.

The likes of Laurent Koscielny and Dinos Mavropanos are also out of contention for a while longer; most likely into November.

Carl Jenkinson? Can he play for us if we are paying his wages?

If he’s fit (started for u23s), then start AMN at left back, or in midfield since Mo is gone.

Give Laca a day off.

Give Holding/Sokratis 90 minutes together before the Liverpool game.

Eat a lot of pasta.

I agree with everything except Holding playing another 90mins. We need to manage him.

At least a half with him and Sokratis, then maybe swap him for Julio Plez. AMN for CM in exchange for Elneny.

Heck throw Jenks at RB and someone else at LB.

I agree with everything except eating the pasta

OK. Let the pasta eat you then?

Mutant Pasta is now a thing !!!

do you think he wasnt in training to say this comment ?

It’s imperative that we have Bellerin and Monreal fit for the Liverpool game, if we have any chance of winning. Hope they make it in time

Is it time for Welbeck at left-back yet?

We will have to save the big guns for the main event this weekend. Prob see Welbeck and Nketiah with Smith Rowe and some experience in Mhkitaryan just behind. In central mid Elneny should be good enough plus prob Guendouzi. Its at the back that we have issues. At fullback without risk to Bellerin, Monreal or Kolasinac, its time to dust off the limited Jenkinson maybe and have Lichsteiner on the other flank to give Granit a rest. AMN presumably still unavailable as well otherwise a good pick for Lback then Lichsteiner can play Rback. At Cback we are most… Read more »

The Gooner
Reply to  santori

In terms of defensive recruitment, I don’t think we bought necessarily the right choices last summer.

Sokratis and Lichsteiner are both OK stop gaps. BUT long term, we need to be sourcing for a more robust solution.

Welcome to the first team Cohen Bramall! Seriously, I think our u23 left back is injured too. Osei Tutu? Bramall just started playing again after being out long term.

I think Jordi Osei Tutu is a right back, quite physical too. Like him as bellerin back up. That said, kinda nice to have a Jordi in the team

No chance Medley will play against Blackpool; he’s playing for the Under 21’s tonight.

So, I tried to view the team sheet for the game yesterday on the Arsenal website. Who would think it would be that difficult a thing to do?

I obviously haven’t been on the website (other than the tickets section) for a while. Who is in charge of the formatting of their pages? It’s like having a load of different bits of information shot at you out of a confetti-gun!

I find it an absolute mess, but maybe I’m just getting old.

Niles should be ready soon

I don’t want any plus size bras especially with this injury crisis.