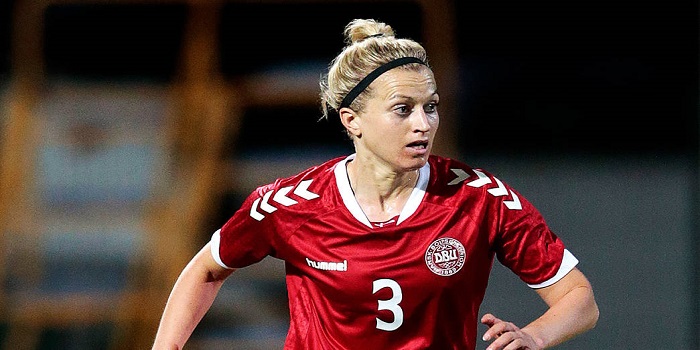 With a small squad and plenty of injuries to contend with, Arsenal have acted quickly in adding 32-year old Danish centre-half Janni Arnth to their ranks for the winter transfer window. Janni will join the club in January once the window officially opens on January 1st. Arnth’s contract had expired at Swedish side Linköpings FC. I spoke to Scandinavian women’s football expert Katja Kragelund about what Gunners fans can expect from Janni when she joins in January.

First of all Katja, what kind of player is Janni and what are her strengths and weaknesses?

She’s a very experienced centre back, who has exceptional leadership qualities and is a model professional. She is a really good role model for younger players. Like most other Scandinavian centre backs she’s tough. She’s a good passer, both in terms of playing it out from the back but she can also play a good long range pass.

It says a lot, that when she got injured early on in the European Championship in 2017 that the coach opted to keep her with the Danish squad because they wanted her influence and experience around the team. She isn’t the fastest, but her passing range and her experience are her big strengths.

Jeg er glad og stolt over at jeg i fremtiden skal repræsentere @arsenalwfc. Jeg glæder mig meget til en ny udfordring i en fantastisk klub. ——————————/////—————————— I’m happy and proud to announce that I’ve be representing @arsenalwfc in the future. I look very much forward to a new challenge in a fantastic club.

Janni is 32 and coming off the back of a disappointing season with Linköping, how was her form last season?

For Janni, and for the rest of the team in general, it was a season with a lot of ups and downs. Linköping have lost a lot of players over the last two years, with Janni being one of the ones to stay. There’s also been a couple of coaching changes and all that change caught up with the team as a whole. She made more silly mistakes this season than in previous ones, but that was the case for the whole team.

What can Janni bring that Arsenal perhaps don’t have in defence and how can she complement what we do have?

I can say that first and foremost she’ll be bringing a lot of experience and a winning mentality. Both can only be a bonus to any team. Secondly, she’s a typical Scandinavian defender, she is always a nuisance for opposition attackers to come up against as they’re very disciplined, organized and tough. Additionally, she’s a good passer and I think that will suit Arsenal’s team.

We can't hear Laurel, because we're too focused on Janni ?

Janni won the Damallsvenskan in 2016 and 2017, was she a key part of those Linköping teams? Arsenal are in a title race themselves could probably use some of that experience in the second half of the season.

She was a regular in both of those teams. In 2016 players like Pernille Harder and Stina Blackstenius obviously took the headlines, but the centre back duo of Arnth and Magdalena Eriksson (now Chelsea) were crucial for Linköping. She was probably even more important in 2017, since Eriksson joined Chelsea in the middle of the season (and other integral players had left before the season started). Arnth had to step up both on the pitch and as a leader as she took over the captain’s armband from Eriksson.

Which elements of her game will become apparent quickly for Arsenal fans?

I think the fans will quickly learn that Arnth is a player who gives everything for the team she plays for. She has a great attitude, which influences the players around her. She was also a goalkeeper when she was younger, before she was moved to central defence. You never know if that could come in handy….

A huge thank you to Katja for her time and her insight. Katja is a great follow for women’s football and not limited to Scandinavian women’s football either. You can follow her on twitter @applessquabble

Thanks Tim.
Janni Arnth sounds like a loyal player, someone who commits to a project and doesn’t bail if things get difficult. I like that. Big relief that she is coming.

I do hope we are also getting in another midfielder or two in the window – heard anything?