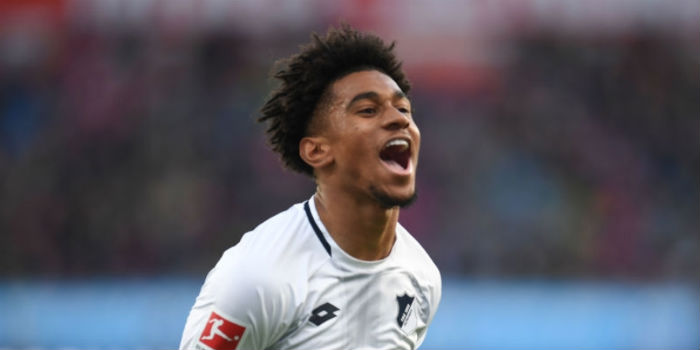 Reiss Nelson has revealed that a tip from coach Julian Nagelsmann led to him opening the scoring for Hoffenheim as they beat Bayer Leverkusen 4-1 at the BayArena.

The England under-21 international caught the home side off guard when he collected a short corner, took one touch and curled into the top corner from the left side of the box.

It was the 18-year-old’s fifth goal in six Bundesliga appearances and afterwards, he explained how the goal came about…somewhat self-deprecatingly.

“I spoke to the coach [Julian Nagelsmann] before the game and he said they sleep on corners,” he told the Independent.

“So I thought it was a great opportunity for me to go short. I saw the space and no one attacked me. I thought: ‘I’m gonna go forward and have a shot here.

“It’s just one of those ones which you hit and you hope for it to go in. Luckily it went into the top corner.”

Nelson was again asked what it is about Germany that seems to be bringing out the best in him. While the attacker was named Premier League 2 player of the season, he couldn’t carry his goals and assists into first-team action.

“It’s just that I’m getting an opportunity to play and that’s the main thing,” he reflected.

“Once you’re a young player and you’re getting an opportunity to play, I think if you’re good enough, it just gives you the confidence to go on.”

It’s amazing that even though he’s really young for a coach, he looks even younger than that.

He actually looks the splitting image of this guy.

And the funny thing is this is a actor from the series Hornblower, an actor playing a sailor in……. Nelsons fleet. Ho ho ho.

“he couldn’t carry his goals and assists into first-team action.”

Probably because he was asked to play as a wing back.