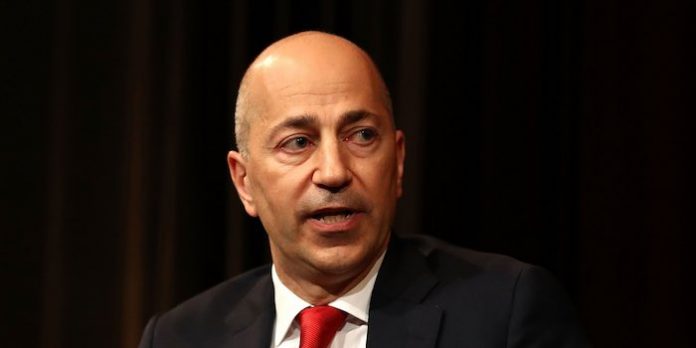 Ivan Gazidis doesn’t officially start his new role as CEO of AC Milan until 1 December, but the continental media are already speculating that his Arsenal connections could shape future appointments at the San Siro.

We’ve been reading for months that the Serie A giants could be interested in signing Aaron Ramsey when he becomes a free agent in the summer, now it’s claimed that both Arsene Wenger and Gilles Grimandi could also follow Gazidis, who finished working at the Emirates last week, to Italy.

Yesterday, France Football claimed that Wenger has been holding talks with Milan’s hierarchy for several weeks and is being lined up as a replacement for head coach Gennaro Gattuso.

Given the Rossoneri are currently in 4th place in Serie A and Gazidis was the main force behind Wenger’s Arsenal departure, it seems somewhat far-fetched. That said, the new ownership at the San Siro – led by American hedge fund manager Paul Singer – is a Gooner with a soft spot for Le Prof. Stranger things have happened in football.

Today, La Gazetta dello Sport focuses on the possible arrival of Grimandi, Arsenal’s chief scout in France. It says that the Frenchman, who won two Doubles during five years as a player at Highbury, is set to become chief scout at the San Siro.

It’s the second time in three months that Grimandi has been linked with an Arsenal exit. When Thierry Henry looked to be on the verge of joining Bordeaux earlier this year, it was suggested that Grimandi could follow him.

We’d suggest taking all the links with Milan with a pinch of salt right now. There’s a lot of joined up thinking going on and little real evidence.

Please let us play AC Milan in the knockout phase of the Europa with Wenger as their coach!

I don’t see any particular reason to be happy or excited about it.

Why?
So wenger loses?
To put emery over wenger?
Wenger return?
None are really that attractive at the moment.
I’d rather another Emirates cup visit maybe.
Arsenal
Ac milan
Monoco
Hoffenheim

Not sure Henry will still ne with Monaco. Things are going pretty bad for him with the squad he inherited.

Please no. I would not want to lose against Wenger and I don´t have any grief against him to be happy to beat him.

I think I know what that “C” stands for now.

With Wenger likely joining a respectable side in Europe sooner or later it’s not unlikely we’d face him at some point.

It’s like meeting an old friend you don’t work with anymore. I don’t see the harm in wishing for that so why the insult?

For more of us the analogy would be closer to seeing an ex lover (who was integral in getting you a six figure salary job, nice house, years of happiness and great sex) with a new hotter, more intelligent and more successful partner. Pretty sure most won’t enjoy that.

I’d describe it as an ex wife you parted on amicable terms with because the passion dried up. The kind you’re happy to see meet a good man whom you respect.

Wishing for an ex spouse to remain frozen in time is insecure, weak and creepy.

A P
Reply to  David C

David C, how about pictures of you printed on the match balls, so it gets kicked about all day?

If I were Wenger I wouldn’t be excited about managing AC Milan.

And even less being back with Gazidis, the high paid CEO that hid behind him.

If I were a Milan fan , id be bricking it right now

Seems unlikely. Gattuso, Milan’s current manager, took over last season, has them up into CL place contention, and the side is starting to look less crap. (I watch a fair bit of Serie A and one of my buddies is Milanese.) Would be weird to sack Gattuso, a Milan legend who is starting to get results, for Wenger. No matter what Ivan The Tiny says. Good defending is pretty much required there and that just isn’t AW’s bag these last several years. Despite his intelligence, reputation, and unquestionable abilities as a manager, this seems really unlikely at Milan. (Maybe at… Read more »

Wenger said he was never going to be a national team manager. Now he is open to that and even to club or football association roles. Everything seems possible with Wenger these days. He may even works with a football director. Who knows ?

Wenger already responded to the rumors calling it ‘fake news’

you couldn’t make this up. if it turns out true, of course. otherwise it will have been made up indeed

So in other words you could make it up

and they probably did

Why would you want Grimandi. There has been an explosion of amazing French players in the last 4 years or so. Some amazing talent in the French League, who we could have got for a reasonable price. We haven’t gotten one. (Lacazette isn’t an emerging talent he’s already the real deal and we paid the right price for that)

He should be lucky he has a job he has missed so many great players and I can’t imagine there isn’t better French scouts out there.

I would rather want him to go to a club like Bayern where success is guaranteed. The man has worked hard enough all his life already and if he is to manage then I would only want him to be as successful as possible.
If he were to manage again..I pray to God that he does well and that we wouldn’t have to face his team. That would just be too emotional.

Football seems so easy to so many people. Success guaranteed? I know they are heavy favourites for the title every year, but there is no guarantee in sports. Having said that, Arsene deserves the highest calibre of player after having to develop for so long. Tactically, he is so advanced, such a purist, such a perfectionist and the kind of football he could create with the players at Bayern Munich would redefine football. I always tell people that his 07/08 Arsenal side would have defined modern football. If that young side had gone on to win the league with the… Read more »

Why does it have to make football sense? Or even relationship sense?

Money talks very loudly and clearly. An eye watering income along with a stunning mansion and lifestyle on the banks Lake Como makes incredible financial sense to all three of Gazidis, Wenger and Ramsey.

I’m sure money was talking even louder when all the big clubs were coming for Wenger. He could have easily left for Madrid or whatever at the end of an Arsenal contract and made a killing. I’m not saying it’s not a factor, but you don’t need to know much about him to know money isn’t going to be the number one priority.

You’re assuming that Wenger, Gazidis and Ramsey think like you. Who knows, maybe they do? Or maybe not.

Well, while i agree with the take the whole story with a pinch of salt thingy, i am also wary enough from experience not to be completely sceptical, why?…remember the Gazidis story when it first broke and most pundits and fans, self included regarded it as hot air, given the fact that he has just achieved the power base he has been scheming for at Arsenal?…well, look at us now

Given that it seems Gazidis couldn’t do his job properly with Wenger around it seems odd he’d want him, albeit with less power

This time Gazidis will have power to do his job properly. He might have had an issue with Ars ene, or maybe he didn’t, but you can’t deny that Arsene is a great manager and personal issues will not matter when he succeeds.

I think respect in this line of work is very important, because personal issues could come back to haunt you. Look at Spain at the World Cup. You act in the best interests of the club and you will succeed, you act according to personal preferences and you end up with a Moyes situation.

I can DEFINITELY believe the Ramsey rumours, as by all accounts the deal that we took of the table was offered by Ivan, who was a big fan. Less convinced about Wenger though. In fact, though when he initially left he stated his desire to get back to coaching ASAP, I have a feeling the past few months have had him reflect (his comments from France about the many regrets of staying too long at arsenal and what it cost him personally, like quality time with his daughter), and I think November 2018’s Arsenal probably wouldn’t want another coaching role.… Read more »

Turns out they didn’t hate each other after all???

I’m sorry but this makes no sense at all. Shield from what? Was Ivan pullingnthe strings at Arsenal? Was he selecting the team? Signing players? What would he need a shield for? He is a CEO, if the off pitch performance of the club had gone off the rails at Arsenal, nobody would have blamed Arsene. But Ivan is being blamed for our on pitch failures, now how is that fair or logical? Ivan does not need a sheild or ever has needed one. People are just looking for a villain to blame for Arsene’s shortcomings. Arsene is a great… Read more »

Are you Ivan in disguise (completely agree with your comment though)

Looks like we messed ‘pool up at the weekend, they just lost in the CL

I would fucking love Arséne to win the champions league.
As long as we aren’t in it
And he is,
Which Milan aren’t.

If this were to happen it would be in spite of Gazidis and not because of him. I would laugh so so much if this came about! Gazidis is one of the biggest bullshiters in football. We went fucking backwards under his spineless stewardship. He should have resigned years ago once it became clear he couldn’t implement any of the changes he wanted. Yet he held on and on and bolstered his bank balance. Let’s hope he spends the next ten years trying to replace Wenger in Milan, though I wish Arsene no ill and hope he enjoys the autumn… Read more »

We’ve gone backwards in the last few years because of Arsene’s sloppy, half arsed tactics and excessive loyalty to players and staff. He had unchecked control over every football related function of the club up until maybe the last season. This was Wenger’s stewardship, not Gazidis’. It’s perfectly possible to appreciate that he has been a great manager for us and remains a very decent human being while not being blind the deficiencies in the latter period of his management. And creating a good vs bad guy narrative to excuse his failings is just childish. Gazidis may have been a… Read more »

Fuck news. Arsene is waiting for the real m job. Vic Akers will go with him.

Where is the poo-meter when you need one?