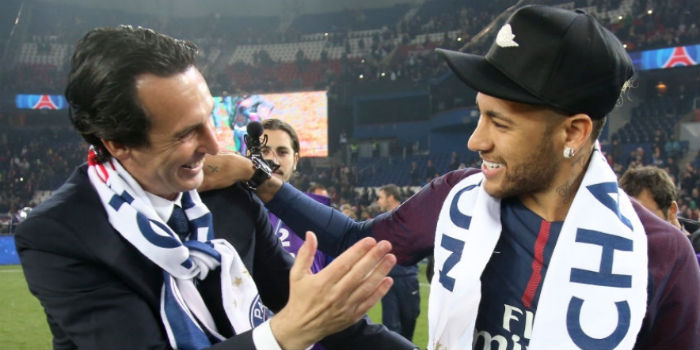 Neymar believes Unai Emery will bring success to Arsenal having experienced life under the Spaniard at PSG last season.

The Brazil striker, who moved to the Parc des Princes for a world-record fee in August 2017, was a key component of Emery’s expensively-assembled squad as they coasted to a domestic treble.

While silverware on three fronts wasn’t enough to persuade PSG’s owners to retain Emery, Neymar was impressed by his coach’s work ethic.

Speaking ahead of Brazil’s friendly against Uruguay, being played at Emirates Stadium on Friday night, Neymar touched on Arsenal and their new coach.

“We know about their quality and I was really happy to work with him because he’s a really hard working guy,” he told a pre-game press conference.

“I think he will bring good things for Arsenal, which is a really huge and important club here in England. I wish him luck.”

While managing a player of Neymar’s standing proved to be quite a challenge for Emery, on his departure he was glowing in his reference of the Brazilian.

As an example, here’s a snippet from a post-PSG departure interview (translated by Get France Football News)he did with journalist and author Marti Perarnau:

“As a coach, I had the habit of showing players what steps to follow, similar to controlling someone with a joystick. Except that when you come to PSG, you realise that the players are the ones who make the most effective decisions. One day, I told Neymar that, ‘There are match situations we have worked before the game, but in your case, you imagine those situations by yourself.'”

Thank you so much Neymar!
Really appreciate your kind words for our coach.
I do, sadly, regret to inform you that your opinion does not matter.

well said. Hate Neymar. Even when seemingly trying to complement Arsenal he had to add that Arsenal is an important club “in England” as though it isnt a big club outside of England. What a tool.

wow… a lot of Neymar lovers out there. Dont be naive – his comment is a back-handed dis to Arsenal. I really like what Emery is doing here and I have respect for what he did in the past; Neymar basically turned the PSG board against him and undermined Emery’s authority. And to the Neymar lovers, this will really get you —- he is overrated! He wouldnt make it into most managers’ world starting XI.

Bearing in mind the guy is Brazilian and was either speaking a foreign language or had his words translated, don’t you think you might be reading just a smidgen too far into this?

Because you all had the inside track behind the closed doors @ PSG ??? Do me a favour….
Say what you want about Neymar (and antics) the guy’s ability is world class, and he said something postive about our coach.
What’s the fckn big deal ????

There’s no big deal. I just stated a simple fact, his opinion does not matter. You can give him a medal of honor for his statements, but the reality remains: his opinion holds no value.

And all our opinions matter? Know your place in the food chain.

Considering he is a world class player and is praising our manager with whom he has worked, I am very pleased to hear his opinion.

Brendan from nY
Reply to  JB1

You can tell alot about a person by their personality on the pitch. The guy is an A$$. Many of his countrymen think he is a national embarrassment and who could blame them given his dives, playing acting, rebellious behavior within a team.

And then their are his friends. Dont get me started

Can you tell i dont care for the guy?

AusGunner
Reply to  Brendan from nY

I can tell ur a mild sociopath

Nope. I think the guy is a calculating prick. He only is in the newspaper with this quote because he wants it to be. He would have been prepped and rehearsed to comment on Emery… its a predictable topic for a questipn, given the location of the friendly and their history. Plus, he is trying to rehab his image and gloss over his antics. I would give the benefit of the doubt to people with a clean slate or track record of trust or respect. Neymar has none of that. I cant wait for one of Emerys teams to face… Read more »

Yes, maybe Neymar deliberately slighted Arsenal. Or, maybe he didn’t. If you love hating Neymar, by all means use this as an excuse to carry on hating Neymar. If you’ve no strong opinions one way or the other, there really isn’t much to get worked up about.

(1) I think Neymar is a brilliant player who falls down much too easily. He is genuinely fouled very often, sometimes brutally, but often exaggerates the effect; occasionally he just dives. As far as I know, he has always done this (Xhaka said it was true when his Switzerland played Neymar’s Brazil in (I think) the U16 WC final). He seems to be doing it less, maybe out of embarrassment. (2) He is good enough that the temptation (and the marketing impetus) is to build the team around him, and that can lead to distortions. He fit in well with… Read more »

Hahaha. Spot on. Neymar is a right slaaaag.

Neymar to Arsenal in the Summer! You heard it here first 😉

Sarcasm is really hard to do on the interwebs!

Yeah sure it is..

Eh-hem Neymar, Arsenal are a huge an important club not only in England but all over the world! Haha we will have to remind everyone!

I couldn’t give a toss about what you think! Unless you come to Arsenal and stop diving……then I will listen.

We will sign Neymar in the summer to fill in for that left wing role and secure the champions league ….and I woke up.

It’s nice that he said nice things, but we’re not buying it.
You went walkies from the training ground to have an expensive party before a game, and in your audacity, knowing Emery wouldn’t approve, invited him to your party anyways.

And now your corner is spreading stories of wanting to leave because Mbappe is the new Prince of Paris.

A bigger ego than CR7 (if such a thing was possible).

But at least CR7 is as THAT good.

People say Neymar wasn’t good at WC because Brazil was eliminated at 1/4 final. The truth is that Neymar terrorized a lot of defences.

Neymar terrorised my eyes with his awful hair.

Of course, most defenders were worried they’d be red carded due to his antics

It is quite bemusing as to how some Muppets pretend to be angels and try to be gracious. Nice try though!

Apparently, Neymar has an ego the size of the Brazilian Rain Forest and undermined Emery at every turn in Paris. So if I was Uni I’d tell him to fuck off with his compliments.

First time I agree with anything you’ve said here…

Didnt expect such thoughtful words from neymar in the first place

Emery worked with teams with lesser resources with Valencia and Sevilla. But working with a high resource team carries its own weight of expectation not to mention ego/man management. As Henry is now finding out, its not just a bout tactics. Football players are not just widgets. There are personalities, frailties, agents, etc etc… Emery has been an excellent appointment for us. Everything happens for a reason. Sure many wanted Wenger out two or three seasons before but we may have not been able to secure Unai back then. The stars aligned for us. We look now to have a… Read more »

Why is there tapping sounds in here? I have touch sounds turned off on my tablet and it is silent everywhere else but in Arseblog comment sections for some reason.

You can hear that, too ?