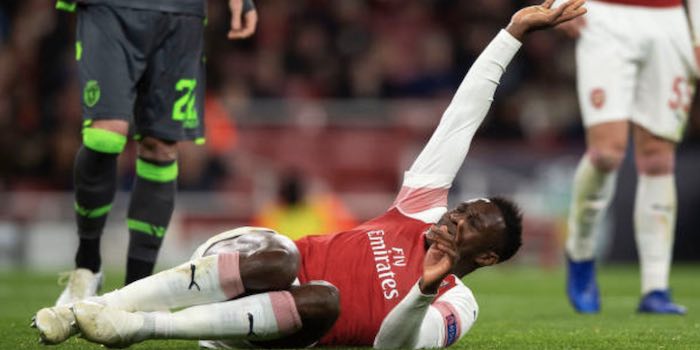 According to The Times (£), Arsenal are weighing up a January bid for Lille winger Nicolas Pépé with Raul Sanllehi confirming that Danny Welbeck’s long-term injury could force the club to change their plans for the upcoming transfer window.

The Gunners new head of football had intimated last month that Unai Emery would not be doing any significant business in the new year, however, with the pressure on to qualify for the Champions League it looks like finding back-up for Alex Lacazette and Pierre-Emerick Aubameyang is now on the agenda.

With seven assists and eight goals in 13 appearances to his name this season, Pépé, an Ivory Coast international, has been linked with a big-money move to a host of top European clubs in recent weeks.

Whether he’s the man to add a new dimension to Emery’s attack remains to be seen; for the moment the backroom boys are weighing up their options. No doubt Sven has already put a cross on his checklist next to the ‘Played for Borussia Dortmund’ box.

“That is absolutely something unplanned,” Sanllehi said of Welbeck’s injury.

“Yes, that makes you consider things. I am not saying that’s a green light to go to the market but we have good players in the house also that may get further opportunities like Eddie Nketiah for example.

“We need to see. We are in November so it’s a good time to start analysing what options we have in the market. We are not closing the door but it’s still not the preferred one.

“The plans were made in the summer. We are happy with how things are going. We are always going to strive to be the best team we can be.

“If there is a very good opportunity, we are definitely going to consider (it), we will see. Danny Welbeck’s injury alters, in a way, the views.”

Given that Welbeck is out of contract at the end of the season, there’s been speculation that the club, while he faces the prospect of a long spell on the sidelines, could hand him a short-term deal. It’s something the BBC’s David Ornstein intimated could happen when he spoke to Blogs on a recent Arsecast.

Keeping his cards close to his chest, Sanllehi would only say on the matter, “He [Welbeck] knows he will get all of the support from the club.”

Like that we are trying to get relatively unknown but up and coming players from the French League. Has worked well for us before.

Pepe has been a thing for a while now. Excellent wide forward, with top stats in Ligue 1 this season. There’ll be interest from every big club that needs a player like him. I would be very surprised—but thrilled—if we managed to pull this off.

Good stuff, 21 goals in 49 games at the age of 23. So still some improvement likely, though counterbalanced by the step up in league. And better than Welbeck’s 16 goals in 88 (which must have included many sub’s appearances though).

Big difference in scoring in Ligue 1 vs Premier League.

Chamakh had some decent goal numbers in Ligue 1.

wow, how did we fall for him?

I think the gaffer liked his hair

Nobody liked his hair.

Chamakh was actually decent before RVP came back from injury…

This is the moment to show if the new regime has some of Wenger’s class. When Santi got injured, Wenger opted to extend his contract to give him piece of mind and to let him focus on his recovery. Will they offer some new terms to Welbz or will they conveniently dispose of him?

There’s nothing stopping Arsenal from not renewing the contract and continuing his treatment and recovery + inviting him to maintain training with Arsenal as the next season kicks on. A middle ground. They obviously had no plans for him to be extended but still shows class and care for his welfare.

only wenger would give a contract to a player that’s had it, any normal manager would do the right thing and get rid of him

Hey, this is the risk any player faces when running down their contract. You want security and piece of mind? Sign da ting. You cannot look for a big payday and still have a fallback when it all falls down. Anyways, he was useful but not indispensable. He can train at Arsenal but his place will be Nelson’s next year.

But he’s not been offered a contract

They don’t dispose of them.

They blindfold them, drive them to Canvey Island and put a tenner in their top pocket after they kick them out of the van. Whoever makes it back to London Colney within a day gets another two years.

I had Gervinho type in mindset the kid looks outstanding on the youtube clips. The stats speak for themselves. COYG. Exciting times.

I think Gervinho could have been good for us if Jack RVP and Frimpong hadn’t bullied him so much.

Geevinho was ok in France. Poor in England, Italy and international.
One of the most frustrating players I have ever watched

Good in Italy and international.

A Different George
Reply to  Emery in Aubalaca wonderland

I saw him in a couple of internationals for Ivory Coast and was amazed by his quality (never any problem with his pace, even for Arsenal). I guess confidence does really matter.

If he was given the chance gave to Walcott and Co . He could have done better

gervinho was only a average player

Wide forward is an obvious area of improvement in this team as we just don’t have the right players. Whether or not this guy is the right man for the job remains to be seen but at least it looks like the management have correctly identified a weakness in the squad.

You mean Mikhi is proving the mouse ?

I hope that they won’t forget about Reiss Nelson when they will be analyzing various possibilities. For example, we had Serge Gnabry and we totally bottled it…

A Different George
Reply to  Marek

Not sure about Gnabry–he is German and was determined to play in Germany.

At first sight i thought of the ugly defender, oooofff

Rich
Reply to  Frank from Vienna

They should get formals and pepe arsenal

I wonder what side he plays from. I know we’ve used Welbz more often on the left, but in my opinion, we need cover on the right more. It’s not really the best position of any of the players we use there – Ozil, Mkhi, and Iwobi. Ozil and Mkhi usually want to drift inside, and Iwobi is better on the left where we can use both him and Auba. Having an out-and-out winger on the right side would provide better balance, in my opinion.

I think that both players and clubs can take out insurance to cover lost income as a result of a player getting injured. I’m not sure it’s necessary to extend an injured players contract – unless they feel that the player will recover and be able to contribute to the club. Surely in a self sustaining model there has to be some pragmatism.

Definitely in the position we need at Rwing and forward.

Looks exciting. And if Clive from Arsenal Vision rates him, then he must be good.
Just wonder how that works with Nelson.

Unless you have both on both wings. But what happens to Iwobi? Maybe one day he really will convert to that perfect CM next to Torreira; strength, speed, dribbling and passing to go with his new found work rate.

He looks like Wilfred Zaha but not as good….