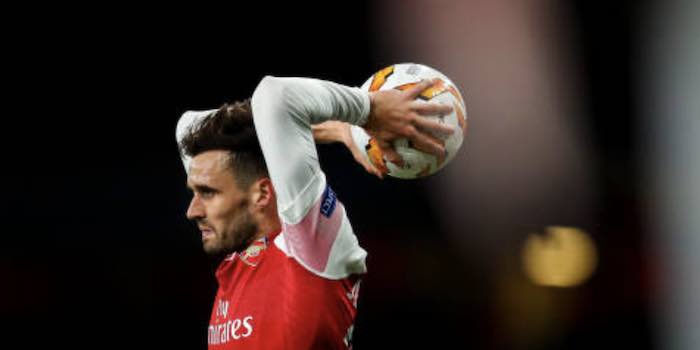 Arsenal could only draw 0-0 against Sporting at the Emirates this evening in a game that was overshadowed by injuries to Danny Welbeck and Stephan Lichtsteiner.

Unai Emery made nine changes from the team that drew with Liverpool last weekend, trusting in the depth of his squad to get the job done, with only Henrikh Mkhitaryan and Rob Holding keeping their places.

The game began with plenty of Arsenal possession, the visitors seemingly happy to sit off and soak up pressure as we looked for a way through. Jenkinson and Smith Rowe tried their luck from distance inside the first 15 minutes but couldn’t find the accuracy required.

There was danger in the 18th minute when Ramsey found Guendouzi in behind, he crossed it, Mathieu blocked it and only the intervention of Coates prevented it from going over the line. Welbeck headed a free kick wide, Lichtsteiner picked up a 21st minute booking for a foul in Nani, and the England man again got on the end of a cross but couldn’t find the right connection to beat the keeper.

Unfortunately, in that attempt he seemed to seriously injure himself, and after a lengthy spell of treatment during which he received oxygen, he was stretchered off in considerable pain. Television didn’t show any replays, which is usually a bad sign, and he was replaced by Pierre-Emerick Aubameyang.

Lichtsteiner shot wide, and not a great deal else happened as the game entered 4 minutes of added time at the end of first period, and the teams went in level.

The second half began with a chance for Aubameyang at the near post but he put it wide from Mkhitaryan’s delivery, while at the other end Jenkinson blocked a shot by Diaby as Sporting looked for an opening.

Ramsey showed good defensive discipline to cover for both Jenkinson and Lichtsteiner, but creating chances was a problem for Emery’s side. Iwobi set up Aubameyang but the striker could only find the side-netting, and the manager made his second change on the hour mark bringing on Sead Kolasinac for Jenkinson.

Iwobi shot over in the 67th minute, and as Arsenal were preparing to bring on Eddie Nketiah, Lichtsteiner pulled his hamstring as he charged down the wing, forcing Emery into a rethink. Instead, Ainsley Maitland-Niles was introduced with a little less than 20 minutes to go, and with Smith Rowe also appearing to suffer a knock it was a team down to the bare bones.

Sokratis had to make a block as Sporting looked for a goal on the break, but the visitors sat very deep as the game entered the final ten minutes. Iwobi did well to create a chance for Mkhitaryan but he couldn’t get enough on it to beat the keeper, and the Nigerian was involved again when he set up Kolasinac to cross for Aubameyang but the shot from inside the box was blocked.

With just a couple of minutes to go, Aubameyang was taken down just outside the box by Mathieu leading to a red card for the former Barcelona man, and from the resulting free kick the striker whacked it way over the bar without troubling the keeper.

With 5 minutes of added time there were chances for Arsenal to trouble Sporting, but the final ball was nowhere to be seen.

In the end a disappointing night, not least because of the injury to Welbeck, and it’s the first time the Gunners have failed to score since the opening day of the season.

Bit worrying injury-wise. Hope they both aren’t too bad!

It’s performances like this that make you think that we won’t miss Ramsey if he goes. Poor passes and trying to be too clever.

Hope Welbz is not too badly injured.

He’s a skilful player and i think with regular playing time and a team built around him he will play a lot better. Happened that one season and that bullet half volley 30 yards out vs Galatasary will live long in the memory. We’ve moved on now to the recruiters credit, whether AW or the latest lot. ESR looks class and Mkhy had a good night and he’s the obvious backup to Ozil at 10 for me. Welbeck’s injury might give ESR, AMN and even Nketiah (sp?) a chance to impress. Wish all the best to Rambo as he looks… Read more »

£220k, now removed from the table (presumably Emery thinks he can get better for a pay packet of >£10M pa).

Underwhelming from us tonight, Welbecks injury definitely took the edge out of us but still too many players looked to be lacking a bit

They did, but we had the quality on the field to unlock the defence

TBH, we lacked any kind of quality.

They defended well to be fair, and we were missing some of our best players

Bad night all round. Darn.

Nanny is a massive cheats

Anyone else felt really sorry for Eddie?
Hope he continues to keep his head up

yeah, but still will be a little boost to know he was the managers first choice to bring on at that stage. he’ll have his chance soon I imagine.

Miki is ridiculously terrible. Not sure who was worst, him or Ramsey.

I thought he was the only attacking player along with Guendouzi who was at least trying to make something happen. But it really didn’t come off today. Ramsey was anonymous and Iwobi was trying one trick too many.

It seems Mkhitaryan is the new figure of hate. He played very well although his finishing was bad.

Agreed, he isn’t delivering enough for the amount of chances he gets

Now I’m not saying stats say everything, as I certainly remember at least one atrocious corner, but generally I think he did ok.

The stats do look better than the 90 minutes I saw. I think he’s lacking in confidence at the moment and clearly emery believes he needs to play to boost it

Best moment in the game was when Lich ties Smith-Rowe’s shoelaces… he’s a real father figure in this team!

That was hilarious. And I got the joke in 5 seconds before the commentator

Very difficult to glean any real positives from that but Holding was solid and Guendouzi continues to bear the burden of an older player with ease. I hate bashing on any player but more was needed from Ramsey today. That attempted flick at the end when there were other players available in the box, made my head hurt.

One tackle aside I completely agree

Ramsey and Mkhitarian were shocking all day. So many poor decisions. I’m not sure I’d miss any of them. Guendozi has heart and a football brain but he lacks experience. Jenks is not a left back and sadly not the quality we need at the moment. And for all his deadly finishing, Auba has a poor 1st touch and that’s why Lacazette will always be a better central striker. He’s better off running onto the ball than receiving it, taking a touch and turning to face goal. A very frustrating night all around, I wish Welbz and Licht a speedy… Read more »

Goes without saying most but disapointing thing about tonight was the injury to Welbz, who’s been a really good squad player for us this season. Tbh in terms of the result i think it’s fine. Important to remember Sporting aren’t exactly minnows (3rd in the portugese league) and in terms of our starting 11 i’d say only 2 were first choice (Sokratis/Holding and Miki/Iwobi depending on your point of view). Love Jenko but you gotta say whenever you’re playing a game with him at LB you know its not exactly your strongest side, although thought he did decently enough tonight.… Read more »

Crosses into the box were awful today. We need to do better in the next game.

Absolutely horrible injury to Welbz. You could see in Rambo’s eyes that this was kinda similar to his leg break. His and Guendouzi’s faces told you straight away that the season (hopefully just the season) is over for him. Would be a sign of class to offer him an extension for 1 or 2 years at least. When fit he’s a more than useful squad player and I think, given the injury, he’d be happy to sign a short term extension for wages that a club like Arsenal should be able to afford easily. Get well soon, Welbz!

Thought Guendouzi was quite hesitant on the ball and seemed to get caught sleeping a few times. Blame the injury to Welbz, it obviously had an effect on the lad. Thought Eddie could have come on for Steve when he got injured, but a bit chancy going three at the back when you don’t really have to win I guess…

A few times he was surprised by players behind him. Probably needs to be a bit more aware but also needs his teammates to let him know

Shit game but we got the point we needed. Shame about Danny.
Sporting were negative and came for the point. We were rubbish attacking. Again.

With Dannys contract winding down I do hope we take good care of him for however long it takes. Nasty looking injury overshadowed the game for me.

Hantal
Reply to  89 was fine

I doubt he’ll get a contract but I agree, hopefully we’ll get him fixed up

Generally I don’t complain about refs but Sportings intention to play unSportingly was obvious from minute one.
They stepped stomped clutteredespecially from the left side.
He should have yellowed a couple of them to maintain the control.
Well he didn’t and …at These matches you pray for staying healthy

We dominated the match. Not much offensive threat from them at all besides Nani rolling on the ground. BUT just could not find that extra edge to finish it. Still qualified for next round and we can yet top the group. Downside is injuries. Danny looks like a bad one. Lichsteiner yet another hamstring. Felt it was odd we signed him but considering the fullback perfect storm of injuries, he played his part. That said, great to see AMN get a chance out on Rback. He may be the future. There is of course also potentially Pleggy to try for… Read more »

A decent team content to park the bus. Was always going to be tough to score when a team defends all the time. Whilst nice to score, a 0-0 wasnt a bad result really.