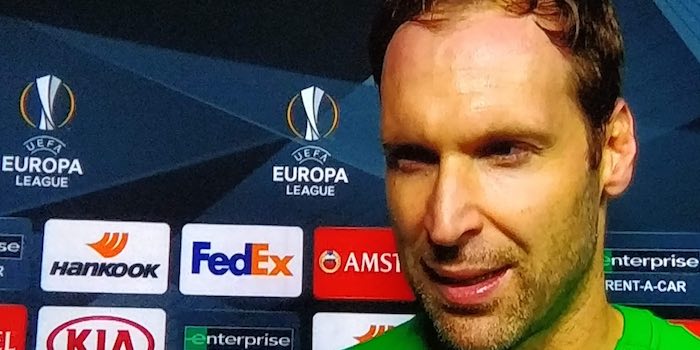 Petr Cech spoke to BT Sport after the 0-0 draw with Sporting at the Emirates this evening. This is what he had to say.

Congrats on qualification, but was it a frustrating game?

Well, it was because they defended really well and we created half chances. We did very well with a lot of possession and controlling our game, we played well at the back and didn’t allow them any chances because we were well organised.

It took us a while to open them up, this is the kind of game where you need to score and unfortunately we didn’t. It’s disappointing to have lost two points because we wanted to win, to guarantee the first spot which is the main thing.

We also lost two players today. Danny looked like a serious injury which is not good to see, so all thoughts are with him, and obviously Stephan after so that made it more difficult.

How difficult to lose a goalscorer, and does it affect the mood?

At half-time we knew we needed to push for the goal and to maintain the intensity. We had some good looks in the second half, some close calls but we couldn’t put it in the back of the net so we take the draw and the qualification for the next round and we move on.

Was the performance disjointed and was it related to Welbeck’s injury?

I think it was down to them really. They were very well organised, they worked very hard and they have very good players as well, so you can’t throw everything at them without controlling your own emotion and game. We lacked a bit of the killer pass and that was the difference today.

Tough trip away in Ukraine to finish top

Well now we need to switch back to Premier League and after that we look to finish the job there. Every European competition is a tough competition, especially when you are the favourite of the group – then everyone plays with extra motivation against you and you have to find your way through.

Today, we got a point, we take the point and we move on.

He looked very calm with the ball at his feet which bodes well.

I agree. Personally I feel safer with Cech who shows more composure, positional sense and not weak st crosses.