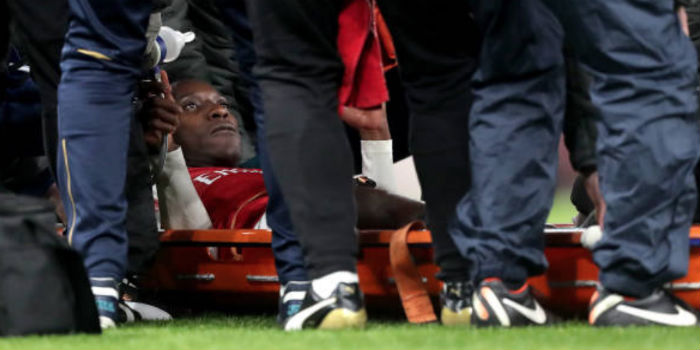 Unai Emery fears that Danny Welbeck has broken something in his ankle after the England international was taken to hospital following a bad landing in the first half of Arsenal’s 0-0 draw with Sporting Lisbon.

The striker, who is out of contract at the end of the season, has already overcome two ACL injuries during his four years at the Gunners but the timing of this latest problem now casts a shadow over his future at the Emirates.

After the game, which saw the Gunners qualify for the Europa League knockout stages, Emery sounded very downcast about the situation.

“This is the worst news tonight,” the Spaniard told the Evening Standard.

“We think it’s serious. He was working well, doing a good match. He had chances.

“His injury also affect the mentality of the players. When you are playing football, playing competitive matches, it can happen. We don’t want that. This is our profession.

He added: “Every player at the pitch looks at this injury. The first thought in your mind is for the player.

“The players were concentrated on the match, we forgot the injury, but the first thing after the match was to ask for him.

“Every injury is different. He has broken something in his ankle. It is a different injury than another.”

We can only wish Danny all the best and a speedy recovery.

Not for the faint hearted but it looks horrendous.
Good luck Danny, get well soon.

Good luck Danny, all the best. Hope you get to pull on an Arsenal jersey again.

Such a great character. All best wishes to the Welbeck family. I’m sure he can back, he’s done it too many times before.

On another note when since can we upload photos?

Wishing Danny all the best!

What a horrible thing to happen to such a nice bloke, sometimes life really is unfair on people. Really hope he recovers and gets to play again even if it’s not with us.

What can you say about the game after such a horrific injury?
Danny was playing for his contract and then snap.

Couldn’t happen at a worse time for Welbeck with him really earning Emery’s trust and in his final year of his contract. I wonder what Emery will do to replace him with really just two strikers on the senior roster. I guess he would pull up Nketiah?

Oh dear. Poor Danny. Speedy recovery to him but this looks serious. Just an awkward angle for the ankle. And he was doing very well too for us. Emphasises the need for reinforcement this January. We need a player who has wide function so Auba and Laca can rotate up top. Preferably IMO someone on the Rwing to balance Iwobi who seems more dangerous from left side. There’s been a bunch of names discussed from Pavon to Pepe, also out there Thauvin and Neres (albeit both maybe cup tied). If we are going to sustain the season this area needs… Read more »

Get 2 d Choppa
Reply to  Santori

Dude are you stuck on repeat or something?? Looks like it doesn’t matter what the topic is, you always find a way to spew your arrogant pointless opinions about tactics and transfers, and you say the same thing EVERY SINGLE GODDAMN TIME. It’s becoming harder to not suspect you as a bot or something. Shut the fuck up and give it a rest pls

feeeeeekkkkkkk. Danny is a really honest player and it’s really sad if he’s out long term. Really gives us a different demention and is someone we can always rely on, and he’s something different going forward.

Welbeck is so unlucky, it breaks my heart. He comes across as a decent guy and he always works hard. He’s scored some important goals for us too. Let’s hope he heals well and comes back stronger, whether he stays with us beyond this season or not.

Really sucks for him. Always a pro, always gave it his all, and never (at least publicly) complained.
He is weirdly versatile, I consider him the attacking version of Flamini, and not only are we losing a striker who could score regularly, but we are losing an option for the wing.
Fingers crossed he gets to play for us again this season, and if not then we can give him a Europa League winners medal.

H2k I totally agree with you about Welbeck being a key and versatile player for us – I was thinking of the players whose contracts end this season Welbeck is the one I’d have wanted to be given a new contract, so this news is awful!!! I thought he would easily score 15 goals for us this season, so going to be a big loss – he got the winner at sporting!!

Wishing him a quick recovery

Hope we give him the Carzola treatment.. tell him don’t worry about anything. Here’s an optional 1 year extension. Please just focus on recovering.

Don’t want to see him without a club while recovering. All the best Welbz

Why does it always happen to the good guys?!?
Gutted for him.

Wishing you all the best, Danny. Recover soonest. Blessings

Looks like November came late for us this year. Hoping Welbeck will be able to recover from this, it did not look good at all.