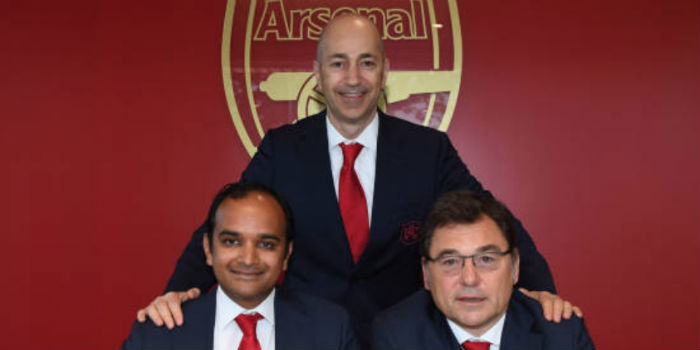 Vinai Venkatesham and Raul Sanllehi say they were both surprised to learn of Ivan Gazidis’ decision to quit Arsenal for AC Milan but insist they are well-placed to continue the restructuring project begun by the now-departed CEO.

Gazidis drew a line under his association with the Gunners last month and will take up his new role at the San Siro on 1 December. In his place, Stan Kroenke opted to promote Venkatesham and Sanllehi to Managing Director and Head of Football respectively, while further internal appointments have taken on additional responsibilities further down the food chain.

In total, the football operations staff has doubled in the space of five years; a clear sign that the club is having to adapt quickly to the demands of the modern game.

Speaking to the Evening Standard about Gazidis’ departure, Venkatesham said: “It was a surprise. It is usually a surprise when a chief executive leaves an organisation unless it is in trouble or failing — and Arsenal is not a failing organisation or in trouble.

“I was surprised and I think Raul was surprised. The positive thing for Arsenal is that over the past few years we built up the capability, we can manage these transitions.

“Obviously, Raul and my jobs have changed and that gets the media and fan focus, but there are internal people in the organisation who have stepped up into the roles we were doing.

“To use a football analogy, we have a great bench and I am proud of how we have been able to manage quite a significant thing in a chief executive leaving, and two people in previously senior roles stepping up and, so far, everything has been filled by people stepping up to the next challenge.”

Sanllehi, who knew Gazidis from his time working as a Nike exec in the US, was also keen to stress the age-old marketer’s adage that his work represents ‘evolution not revolution’. He also took the opportunity to wish the man who hired him, the best of luck in his new role.

“I can only wish him luck,” said the Spaniard. “Milan is taking a top football executive to take on the incredible challenge they have there and I wish him all the luck.

“But it definitely was not planned when I joined the club. That is the point why we are talking about evolution rather than revolution. He did start this and we are following the path.

“We are putting our badge on it and our ideas and we are very happy to be dragging out this new chapter because we are convinced we are on the right track. By all means, Ivan was a big part of this new [path], for sure.”

It remains to be seen whether Venkatesham and Sanllehi maintain their openness with the media. Obviously, it’s easier to hold such events when you’re new in the job and things are going quite well on the pitch.

As far as we’re aware, this is the duo’s second sit down with the press in two months; a welcome state of affairs given the probability that AGM meetings will be cancelled as a result of Stan Kroenke’s full takeover.

Perhaps we’ll get an invitation next time…

Edu: Everything about Mikel excites me

This could well be my personal hope and wish but, seeing how LA Rams are doing really well this season after all these years, it gives me a tinge of positivity that Arsenal will eventually become a force again.. under Kroenke *GASP*

But one can only hope for the best. For now, I’ll be content with any cup or just a top 4 finish at the minimum for this season #COYG

I think that might be difficult, in Emery’s first season. My tip is 6th in PL, and maybe a semi or even a final in one of the cups. But no victories. Next season, however..

Gazidis doesn’t get many compliments, given his apparent hiding and lack of support for Wenger and the football side of the club, so interesting to see some here.

Raul: “Hey Vinai, wouldn’t it be cool if we took a photo together in front of that big Arsenal emblem?” Vinai: “Totally my man, I know it’s a little self-indulgent but who wouldn’t when you’re at such a prestigious club?” Raul: “I know right!? We’d be mad AF not to!” Vinai: “Sweet, just us two, with nothing blocking the view of such a wonderful emblem. Right I’ll set up the timer on my camera app… get in position, Raul!” Raul: “On it!” Vinai: (sits down next to Raul) “Right, and 3… 2… 1-“ Ivan: “Oh hey you guys! Oh cool… Read more »

And it would be rude of me not to mention the fact that Ivan in that pic looks like Homer Simpson on hunger strike.

All talk and no investment, makes Arsenal a dull team.

Considering we live by our own means, we haven’t been shy buying in recent seasons.

The one season we only bought Cech was the exception. It could have made the difference had we been a bit more ambitious then but Wenger was as much his own worse enemy in that sense.

I don’t think the club were necessarily restricting him that much.

Well Gazidis made sure we got Emery before he left which was the main thing. Also he’s put a decent team together. It’s easy to be critical of Gazidis but what he was suppose to do he did well. He is in charge of the business side of the club so I’m not sure why people have misgivings about him bc we did not deliver on the pitch. It was never easy to move Wenger on given the track record he had before. Plus everything happens in good time, had we shifted Wenger on earlier, we may not have got… Read more »

Does anyone know how to get a job at Arsenal?