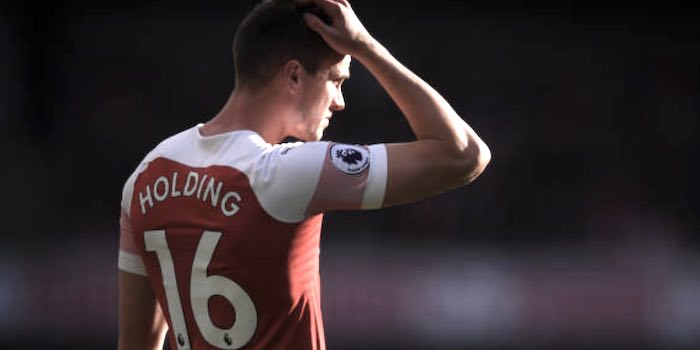 Arsenal’s medical team have confirmed that Rob Holding underwent a successful operation to repair the anterior cruciate ligament in his left knee on Thursday.

The defender suffered his season-ending injury during last Wednesday’s 2-2 draw with Manchester United. He now faces at least six months of rehabilitation before he returns to first-team action.

Elsewhere, the club have confirmed that Shkodran Mustafi’s hamstring injury is enough to make him a doubt for next Wednesday’s Carabao Cup game with Sp*rs. The German limped off in the 1-0 win over Huddersfield after picking up a booking that means he’s suspended from this weekend’s trip to Southampton.

Sokratis is also suspended having hit the five yellow card mark last Saturday. It means that Laurent Koscielny, who made his first appearance for the club since May in last night’s win over Qarabag, Nacho Monreal and Stephan Lichtsteiner could form a patched up three-man defence.

The boss has already spoken about the need to be cautious with the Frenchman. He’s set to assess our club captain over the next 24 hours before making a decision about his involvement this weekend.

Southampton have had a triple injury boost ahead of Ralf Hassenhutl’s first home game in charge. Danny Ings and Shane Long are back to full fitness, while defender Cedric Soares is also back in contention.

Good news, plus he has youth on his side which should help in his recovery. He’ll be back getting in Diego Costa’s face calling him a nutter in no time

Shane long. Kos the boss always have a torrid time against him. I wish he misses out.

Koscielny Monreal Leitchsteiner – patched up defence with a combined age of more than 100 years – memories of Adams Bould Keown.

@Richie you are very funny.

I just thought it was an interesting stat!

They are 99 years until they reach 100. But, before then, they remain 99. Because that’s how things work these days

They have more than 100 years of life between the 3 of them.

All 3 fit, would be a great back 3
But 2 coming back from injuries and 1 who hasn’t played regularly in ages 🙁

Against Southampton’s woeful defence, we should have enough in attack to outscore them. Even if Koscielny had a bad reaction to last night and we had to play Medley instead, I’d still be confident of 3 points.

Great news!! Love this guy, wish you a speedy recovery.

If we get Calero for under 11m euros from Valladolid, we can fit him in.

Koscielny will likely retire this summer. Lichsteiner will be gone too. Chambers I suppose will be sold. Mavropanos needs to go on loan he is unproven.

So it could be Mustafi, Sokratis, Holding and Calero with maybe Monreal extended for another season or so.

Seriously? What else could they have said, “The surgery was a major F up and Holding will never play again? Not trying to be funny here but nowdays these types of surgeries are very much routine and the most important part is mental strength and rehabilitation.

Must be bloody annoying for Mavropanos. Such a good opportunity for a young centre back, and I thought he looked incredibly promising last year for those few games (red card excluded). Rather reminded me of senderos when he first came on the scene before everything went tits up.

Crazy as it may sound…….I’d be more than happy if Medley got a start.
Total class on the ball……he’d piss all over Long.