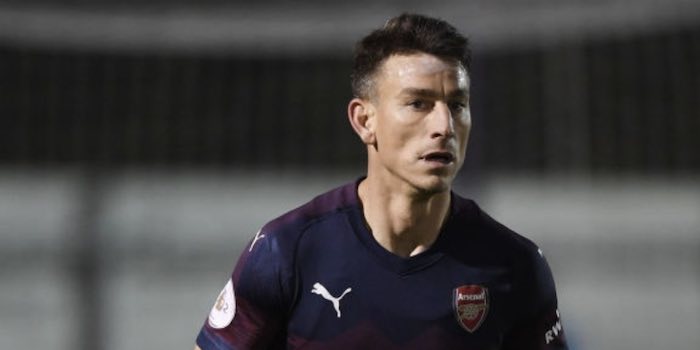 Fears that Laurent Koscielny might have picked up another injury during last night’s 2-1 defeat to Portsmouth in the Checkatrade Trophy were played down afterwards by youth team boss Freddie Ljungberg.

The French international limped off late in the game, sparking concerns he may have suffered a setback in his recovery from an Achilles tendon rupture, but it was revealed later to be caused by cramp.

Speaking to the Islington Gazette, Ljungberg said, “It was just cramp, but unfortunately he couldn’t move.

“We understood that he wasn’t worried at all, it was just some cramp. It was a bit sad because he signalled to me before their goal he had cramp.”

Youngster Bukayo Saka had levelled things up for the Gunners, but the 85th minute saw the U21 knocked out of the competition.

It has been a worthwhile exercise though, giving some of the academy players the experience of playing against experienced professionals, and that will be good for their development.

Is it just me or is there an elephant in the room? Like if Torreira goes down for a while?

I had a dream abt this.. but what really inspires me is the fact that once you are in this kind of a position .. bro you should have strong bones people in this positions are usually not vulnerable viera vidal fernandinho kante matic .. but once they get sth serious .. its usually a deep dive but i dont think emery has closed that chapter we have more signings coming up . We are on another chapter and we need sth like 6 transfer openings to make this club great again. We will get there and once we are… Read more »

Why can no one say Vieira, Wilshere or Cazorla? Viera, Wilshire and Cazola. Is it a Pro Evolution thing?

Phew. Would love him back playing at his best. Big player for us.

You beat me to it

I’m optimistically hoping he can seriously contend for a place starting January. At his age getting such a serious injury could be very difficult, but it seems like his recovery has been handled cautiously and sensibly.

The squad needs his field leadership on match days. A fighter!

I think sokratis is doing just fine not great but just fine he shut harry down… like a dead log. We have a gladiator in the turf !!

At 33 I think expectation is way too much. There are bound to be niggles for Laurent during the rest of the season and by then he will be nearly 34. It is a shame that his career coincided with the lean years.

That’s lean and we are spoilt in comparison.

You are right there, but it was a very frustrating period by our own standards.

Spuds should be more concerned about their toilet seat shaped, unfinished stadium. No need to worry about a trophy cabinet.

It was about time.. he is a lion .. he is gonna play a few matches.. i love his aggresiveness on the pitch and leadership..

We have a whole section about the youth team with a number of articles every week. Try reading them.

https://arseblog.news/category/players/reserves-youth/ only 20 articles in the last month, so disrespectful!

Here is the section: https://arseblog.news/category/players/reserves-youth/

Hang on, no need to get upset, I’m sure blogs will give you a refund if this sites content does not meet your needs

Lol did rashford just confirm we are among the best teams in the league right now.. well if you think that my crazyness is telling me we gonna win at old trafford tonight.. well I guess you are right!

After such a long time out it’s perfectly normal to have a lot of little aches and pains on his road to match fitness and top condition. I’d only be worried if the injury that kept him out was the source of the pain.

I wouldn’t count on him. Any availability is a bonus.

This will be his last season with us.

BUT we are so short on Cback at the moment. Holding now out.

Lichsteiner stepped in today was OK.

BUT clearly we need to sheperd our Cbacks very carefully. Mustafi now on 4 yellows thanks to card happy Mariner.